After heavy showers across Tamil Nadu on Monday, the rains ceased for few hours during the day on Tuesday.

After heavy showers across Tamil Nadu on Monday, the rains ceased for few hours during the day on Tuesday. Water logging in many localities had already affected normal life of the people, but most of the areas are expected to get rains on Wednesday. 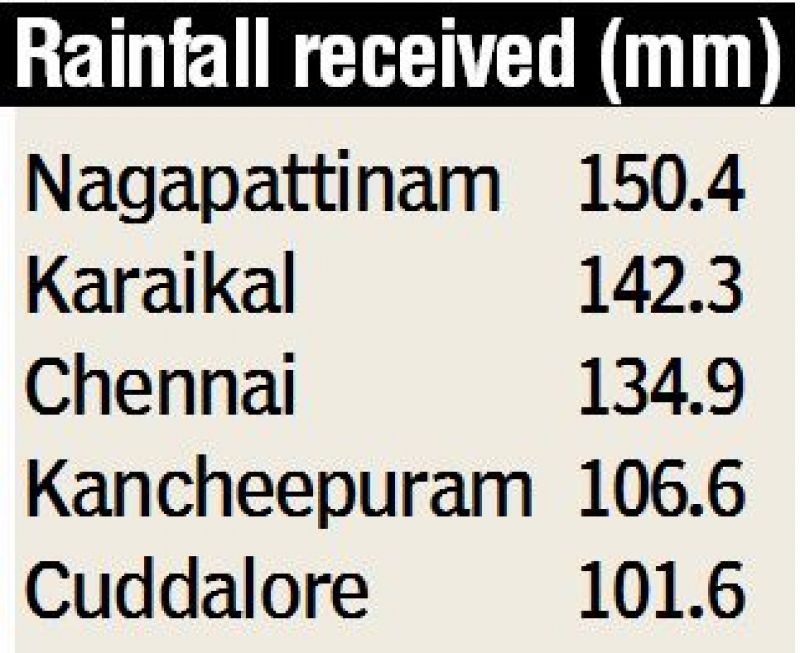 Water-logging in various places including Vyasarpadi Jeeva, Velachery, Otteri, Madipakkam and other areas in North Chennai caused inconvenience to the residents. Rainwater entered the houses and as a preventive measure from upcoming rainfall, people were forced to vacate in some localities.

“Cyclonic air circulation is moving over towards Southwest Bay of Bengal which is likely to cause rainfall in coastal districts of Chennai, Kancheepuram, Tiruvallur, Cuddalore, Nagapattinam, and Ramanathapuram,” said S Balachandran, Director of Area Cyclone Warning Centre.  While Cauvery delta region recorded the highest of 31 cm rainfall, Nungambakkam received 11.64 cms 2 cm and Meenambakkam witnessed 16.87 cms till Tuesday 08:30 am.

Railway passengers in Chennai had a tough time after heavy rains on Monday night disrupted the services delaying around six trains on the Egmore Chengalpattu sector.

While water-logging of signal boxes turned automatic signalling non-functional at many terminals, services resumed after an hour with the help of manual piloting on Monday night.

Rail services also affected services for a few hours on suburban line and brought services at halt between Kodambakkam and St. Thomas Mount railway station. Train operations were stopped for about an hour between Chennai Park and Egmore Railway stations.

Rs 2,000 cut in dole to mothers under 'Ammavodi' scheme in AP

Agniveers to get 10% of defence, CAPF jobs