Chennai: Eighteen bonded labourers belonging to five families, employed to work in a woodcutting unit at Palamthandalam, were rescued by revenue officials in Kancheepuram.

A team of officials led by Kanchana Mala, Sriperumbudur tahsildar inspected a woodcutting unit in Palamthandalam in Erunmaiyur in Kancheepuram district on Saturday night. The unit belonged to P. Mani (62) of Indira Nagar. A total of 18 labourers - four men, four women and six children  were rescued after four years in bondage and the remaining five men, five women and eight children were rescued from 10 years of bondage.

Out of the five families, three were from Vanthavasi in Tiruvannamalai district, two from Madurantakam and one from Selyur taluk were rescued. 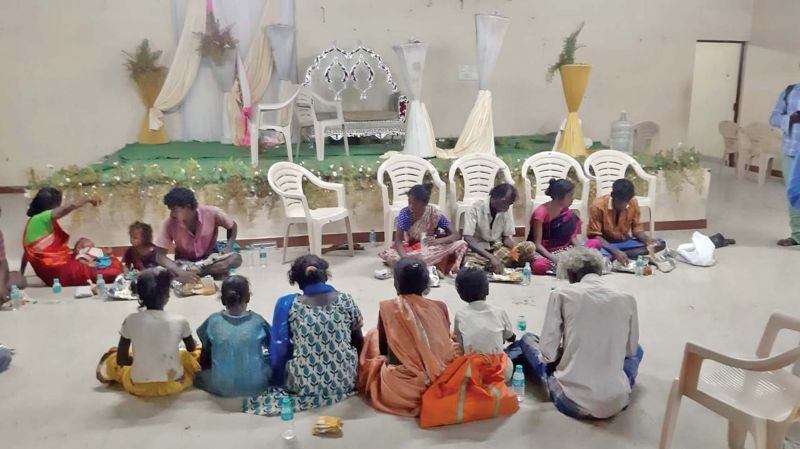 Food being served to the rescued bonded labourers as a rehabilitation measure. (Photo: DC)

Tahsildar Kanchana Mala said, “Based on a tip-off from an NGO that five families from Tamil Nadu were forced into slavery, the Kancheepuram revenue officials and the local police conducted a surprise inspection at the woodcutting unit in Erumaiyur.  Each family had received an advance of Rs 15,000 from the owner 10 years ago. The owner paid each member a menial wage of just Rs 50 a week. They were exploited day and night in the unit.”

In an interview to Deccan Chronicle, Durai Rajan, a volunteer at Released Bonded Labourer Association (RBLA), said, “They were made to work for nearly 12 hours every day, even when they were unwell. A woman gave birth to her child in the unit, without any medical assistance and the baby has not been taken to the hospital till date. They were verbally and physically abused and the women also faced sexual harassment.”

Officials from the revenue, rural development and representatives of International Justice Mission (IJM), an NGO, and the Released Bonded Labourer Association (RBLA) too accompanied the tahsildar in the operation.

Eleven release certificates have been issued by the sub-collector and three families have been sent to their homes. Rehabilitation and other important necessities like an Aadhar card and  ration card will be given with the assistance of the revenue officials, sources said.

Based on the complaint by the officials, the Somangalam police arrested Mani. He was booked under the relevant sections of The Bonded Labour System (Abolition) Act, 1976.

In a similar incident, four bonded labourers including two children were rescued from a brick kiln at Perumapatti village, Pudukkottai by the, Pudukkottai   RDO today. A rescue operation was conducted today based on a tip-off by Shed-India, an NGO working towards the welfare of bonded labourers. Sources revealed that the family of four had been working in the brick kiln for two and a half years to repay an advance of Rs 1.3 lakhs they had received.  The Pudukkottai   RDO has issued two release certificates and rehabilitation efforts are on.