Chennai: August has been a month of records for Chennai and Tamil Nadu.
Incessant rainfall in the state capital is the second highest in a decade for August, statistics from India Meteorological Department states.

This August, Chennai recorded a whopping 257.5 mm, against the average of 126.8mm. Deccan Chronicle had earlier reported of how the August rainfall this year was inching closer to the 2011 record where the city noted 368.9 mm. Both the years had a same weather phenomenon - Break in South West monsoon. 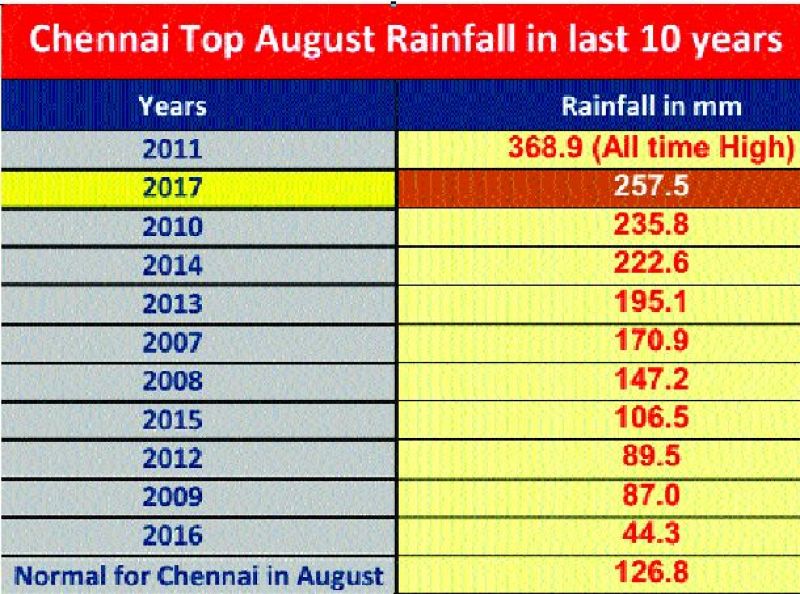 During break monsoon, its axis gets struck along the foothills of Himalayas, facilitating rains in Tamil Nadu, Assam, Bihar and West Bengal, though most parts would notice a decrease in the rainfall, explained weather blogger, Pradeep John, adding that the number of break monsoon days were more this year.

Meanwhile, as the showers continue to drench the state, weather experts predict to be a wet start to the month of September.

“There are good chances for southern Tamil Nadu to receive significant rainfall in the next few days,” said Pradeep.

Similarly, Tamil Nadu noted 161.8 mm rainfall this August which is much higher than the average of 87.4mm. August 2017, thus has been the wettest for Tamil Nadu in the past fifty years, as the state last recorded 167.8 mm in 1966.
Widespread rains continued in Tamil Nadu on Thursday, as many localities including Vellore received moderate rains.

K. Srikanth, a weather blogger,  mentioned that Vellore noted over 66mm in a span of one hour. “Between 1:30 and 2:30 am, Kalavai in Vellore recorded 66 mm on Thursday,” he said in his blog.