DECCAN CHRONICLE. | CHANDRASHEKAR G
Published Jul 1, 2016, 3:46 am IST
Updated Jul 1, 2016, 3:58 am IST
With the state Cabinet approving a Special Purpose Vehicle and allocating the funds required, the project could soon kick off.

The multi-crore Peripheral Ring Road (PRR) project, aimed at decongesting the city, has been hanging fire for the last 12 years.

The multi-crore Peripheral Ring Road (PRR) project, aimed at decongesting the city, has been hanging fire for the last 12 years, leaving farmers and residents whom the project would impact, fuming. The land prices too have increased manifold since then casting doubts over the viability of the project. However, with the state Cabinet approving a Special Purpose Vehicle and allocating the funds required, the project could soon kick off. What are the challenges which BDA and the government face in getting farmers to give up their land for the ambitious project, and executing it in a time bound manner?

The ambitious 65- km Peripheral Ring Road (PRR)  connecting Tumkur Road and Hosur Road via Ballari and Sarjapur Roads,  put on the backburner for a dozen years for want of funds, could now finally see the light of  day, easing traffic conditions in and around the city thanks to the approval it has received from the state Cabinet and the Special Purpose Vehicle (SPV) ,which could soon be set up to execute it.

The PRR connect
The state government has finally decided to build the all important 65- km long Peripheral Ring Road that will form a half circle around the city from Tumkur Road to Hosur Road via the Ballari Road, Hennur Road, Old Madras Road, Malur Road and Sarjapur Road. Once it is complete, the city will also have better connectivity with  ports in Andhra and Tamil Nadu via NH-7. The other half of the circle is formed by the 41- km long NICE, which also connects  Hosur Road  and Tumkur Road, but  on the opposite side, via Magadi Road, Mysore Road, Kanakapura Road, and Bannerghatta Road. But the PRR and NICE may fall short of touching each other at Madanayakanahalli, owing to acquisition hurdles, breaking what could have been a well  connected circular route around the city, taking a huge traffic load off its busy interior roads. 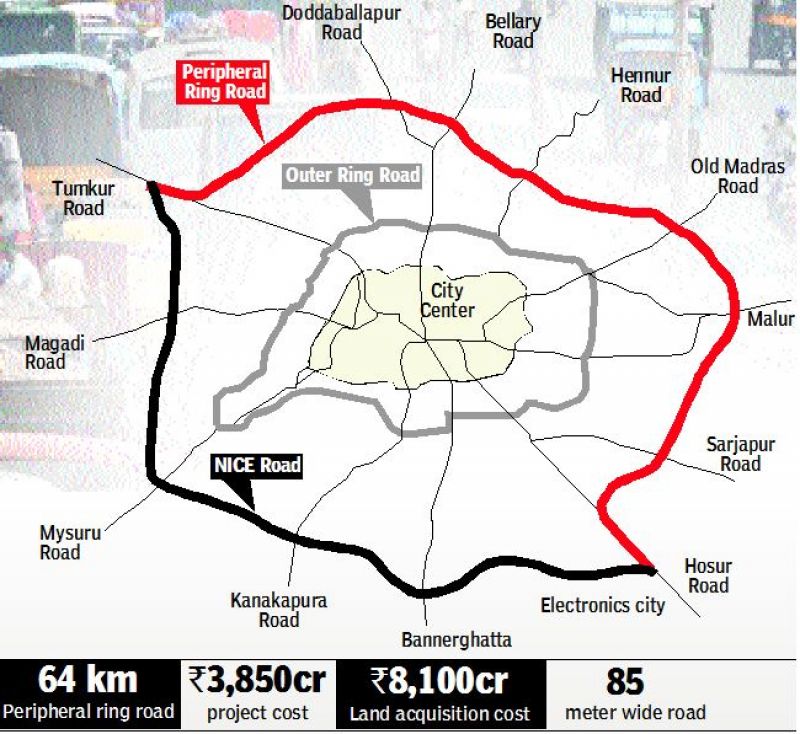 Mr V Ravichandra, member of the Bengaluru Blueprint Action Group (BBAG),   that strongly backed the project, has high praise for  the committee headed by Chief Secretary Arvind Jadhav, which in his words has come out with "an excellent revenue model" for it. The only hitch, he believes, could be convincing farmers to part with their land to make it a reality.

Read: Guest column – ‘PRR will be an economic value corridor’

Like the Bengaluru Metro Rail Corporation Ltd (BMRCL), the still to be named SPV for the Peripheral Ring Road,  will borrow from financial institutions like the Japan International Co-operation Agency (JICA), which provides both long term and low interest loans. Learning from its  mistakes with the Outer Ring Road (ORR), the government plans to create an economic development zone around the PRR to help fund it parallelly and make landowners  partners in the project.

Learning from its mistakes with the Outer Ring Road (ORR), the government  plans to have an economic development zone around the PRR which could help fund it  parallelly and also make the landowners its partners in the project
—V. Ravichandar, member, Bengaluru Blueprint Action Group

While the BDA has already acquired land for 100 meters of the  PRR with  a service road,  25 meters of it will be converted into a commercial zone, which will be handed over to the landowners, fetching them handsome revenue. Also, one acre on either side of the PRR will be allotted for controlled development alongside it , fetching more revenue for the SPV. In another move, a premium Floor Area Ratio could be introduced in the area, Mr Ravichander explains. City development minister K. J. George is in talks with farmers about this, according to him.

“Controlled development around the PRR will help the SPV  provide  better access to it and also allow for infrastructure integration with it. Proper access roads will be developed all through the PRR,”  the BBAG member revealed, adding that as much as 75 meters could be used for building an eight-lane access controlled road with an adequate service road.

The BDA plans to develop a township or cluster,  depending upon the  projected development of the land around the PRR in the near future. Major investors like the Tatas, Ambanis and mega developers could be involved in developing the cluster to showcase the PRR on an international platform.
—P. N. Nayak, BBMP engineer member

The hope now is that this new approach to improve its funding and accessibility will help the SPV execute the project smoothly and without too many hassles. Meanwhile, BBMP engineer member P. N. Nayak says the BDA is proposing  Cluster Development , a kind of township around the PRR. Major investors like the Tatas, Ambanis and mega developers could be involved in the “Cluster” to showcase the PRR on an international platform, he explains.

“The cluster model could work well here as the PRR connects the  international airport and the IT hubs of  Whitefield and KR Puram. The concept of mixed zone development can  be evolved in these parts to persuade people to stay close to their  workplaces,” he added.

Hurdles galore, farmers oppose move
It may have received the green signal from the Cabinet but the  path is far from hurdle-free for the proposed Peripheral Ring Road (PRR) as there is strong opposition from farmers, who are against giving up their land for it.

Although the government claims the PRR will be linked to NICE for better connectivity, this cannot be done as the court has stayed the acquisition of  150 acres to make this possible. It has also asked the BDA to halt the acquisition process until the proposed PRR is completed.
—Rina Mahendra, land owner

One landowner,  Rina Mahendra, who has been waging a legal battle against the project’s realignment, is demanding that the BDA either stick to  the original alignment of 2007 or drop the project altogether as more  farmers could lose their homes otherwise. “The alignment has been changed only to suit the requirements of powerful politicians,” she charged, also challenging the government’s claim that the PRR would be linked to NICE for better connectivity.

“This cannot be done as the court has stayed the acquisition of another 150 acres needed to make this possible. It has ordered the BDA to stay away from the acquisition process until the proposed PRR is completed,” she recalled, accusing the BDA of also falsely claiming that the National Green Tribunal (NGT) had given its consent for the project, when it had not.

“What all this fundamentally means is that the BDA cannot use the land acquired for the road project to monetise the farmers. The purpose of the acquisition is defeated and this has been already challenged. What is stopping the BDA from executing the original alignment, which bulldozes a lesser number of houses?”  she demanded, noting that with the changed alignment the  PRR would run on the gas pipeline and  affect the eco-sensitive zone of the Tippagondanahalli reservoir as well.

“We will not approach any politician or minister to pour out our woes. Instead we will wage a legal war. They must stick to the original plan or drop the project. The BDA did a GPS survey to avoid houses coming in the way of the project, but  is now planning to go ahead with a changed plan, forgetting that it will have to pay huge compensation in accordance with the new land acquisition guidelines. Can it afford this?” she asked.

City development minister, K J. George , who met farmers whose  land will be acquired for the PRR, told reporters later that they had turned down the offer of  33 per cent monetary compensation and developed land to make up the rest of it. Instead they wanted 100 per cent monetary compensation, he said. They were also against development of 25 meters along the PRR, the imposition of an impact assessment fee and a premium FAR, he revealed. “The issue will be discussed with the Chief Minister and another meeting will be held with the farmers,” Mr. George added.

■Guest column: ‘PRR will be an economic value corridor’