Since Yogi Adityanath took charge as the chief minister of Uttar Pradesh in 2017, BJP has lost four major bypolls, including Gorakhpur and Phulpur. (Photo: File)

Lucknow: The defeat of BJP in the recently concluded bypoll in Uttar Pradesh has invited criticism from its own lawmakers. Chief Minister of Uttar Pradesh, Yogi Adityanath, has been openly criticised by his own party after it lost in two bypolls on Thursday.

BJP MLA from the Hardoi district Shyam Prakash has named Yogi Adityanath in a satirical poem, posted on Facebook, in which he implies that the priest-politician came to power riding on Prime Minister Narendra Modi's appeal but frittered away a massive public mandate in Uttar Pradesh last year.

"It is my opinion. Corruption is on the rise and that is the only reason...People are working with their own mind. The Chief Minister should work harder and look into this. They must, otherwise it won't work," Shyam Prakash said today, defending his outburst on Facebook.

Since Yogi Adityanath took charge as the chief minister of Uttar Pradesh in 2017, BJP has lost four major bypolls, including Gorakhpur and Phulpur, the strongholds of the Chief Minister and his deputy Keshav Prasad Maurya. 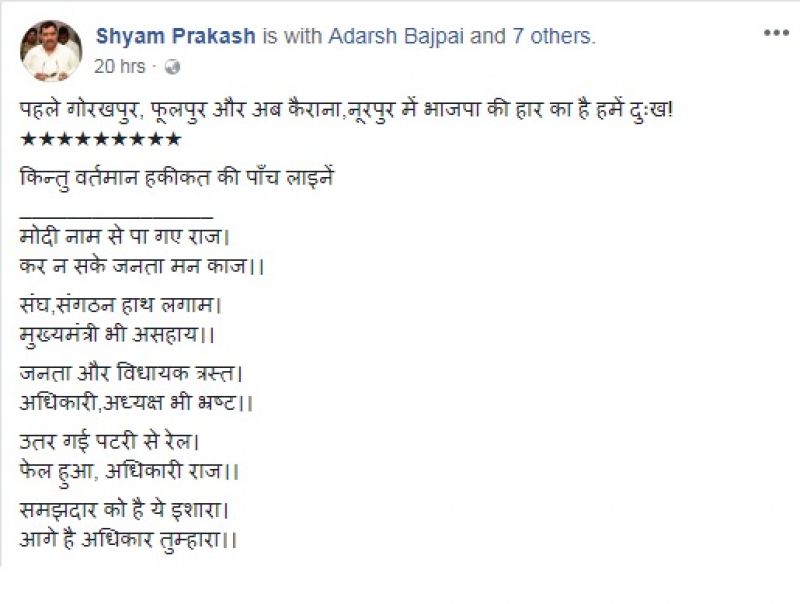 On Thursday, BJP lost the Kairana parliamentary seat to a candidate backed by opposition parties. It also lost the Noorpur Assembly constituency to the Samajwadi Party.

Kairana has come to represent the opposition making inroads towards a power tussle against BJP ahead of the 2019 Lok Sabha election.

The defeat is seen to dent the image of Yogi Adityanath, who has been fielded by the BJP as a star campaigner even in elections outside Uttar Pradesh.

For the first time, a party leader has publicly declared that Yogi Adityanath should take the responsibility for the defeat.

In his Facebook poetry, he alleges "misgovernance" and says, "The train seems to have derailed, officer-raj has completely failed..."

Outlawed Maoists call on people to strengthen their party