DECCAN CHRONICLE
Published Mar 1, 2018, 2:36 pm IST
Updated Mar 1, 2018, 2:39 pm IST
With posters and placards, the protesters urged the authorities to provide safety to women students in and outside their colleges.

The protest was called after some students of LSR college alleged that some miscreants have been harassing them in the name of the festival of Holi by throwing semen-filled balloons at them. (Photo: Twitter | ANI)

New Delhi: A day after semen-filled balloons were thrown at some female students of the Lady Shri Ram College for Women and other Delhi University affiliated colleges, a large number of students and teaching staff of Delhi's Jesus and Mary College on Thursday protested outside Delhi Police Headquarters at ITO.

With posters and placards, the protesters urged the authorities to provide safety to women students in and outside their colleges.

''Let's prevent them (female students) from becoming the target of semen-filled balloons. Let's raise our voice in anger,'' the posters read. 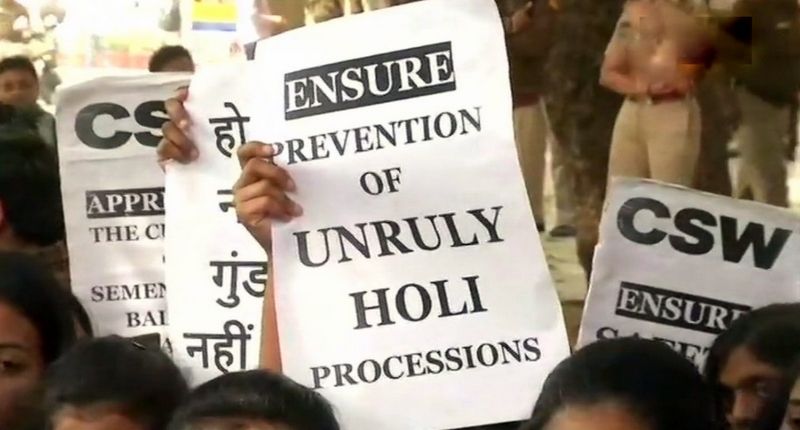 The protest was called after some students of LSR college alleged that some miscreants have been harassing them in the name of the festival of Holi by throwing semen-filled balloons at them.

The incident came to light when one of the students of the South Delhi college reported that a balloon “filled with liquid” was thrown on her and “it dried white” on her black leggings. The girl was later told by her friend that the balloon was filled not with water but with semen.

According to reports, the women development cell of the college held a meeting with at least 40 students following the incident.

Authorities discovered during the meeting that the experience of the student was not an isolated one.

Though no police complaint was filed in this regard, the students union of the college and authorities informed the police.

Meanwhile, police patrolling has been increased in areas around the college. The students have also been provided with a mobile number by police authorities and they have been urged to file a complaint in this regard.

Meanwhile, the National Commission for Women also took cognisance of the reports of balloons allegedly filled with semen thrown at students of a women’s college in the national capital.

NCW chairperson Rekha Sharma said the body had sent a team to meet students and faculty of the Lady Shri Ram College to take first-hand stock of the situation.

“(We have) sent a team to meet students and the faculty and take first-hand stock of the situation. Police also has gone so that necessary action can be taken there and then,” said the NCW chief.

(With inputs from agencies).