Beyond Carlton President Uday Vijayan pointed out that over 17,500 people succumbed to fire accidents in the country in 2015 and called for measures to bring down such casualties. (Representational Image)

Bengaluru: Citizen-led fire safety initiative Beyond Carlton has formulated a five-year city-specific blueprint for fire safety, the first of its kind in the country.

While releasing the document at a press conference here on Wednesday, Beyond Carlton President Uday Vijayan pointed out that over 17,500 people succumbed to fire accidents in the country in 2015 and called for measures to bring down such casualties.

Vijayan said, “Even though solutions to fire safety are well known and available, there was a need for a pathway to implement solutions that needs to be charted.”

He added, “The blueprint is focused on efficient execution of known solutions. It takes four-pronged strategies which are quantified five-year goals that are practical and achievable, an actionable road map with quarterly milestones, a single owner responsible for execution and transparent and quarterly performance data against milestones which are set for each year.”

R.A. Venkitachalam, member, Beyond Carlton, said, “Our goal is to bring down the death rate related to fire accidents to zero, while the injury and property loss rate to 50 per cent over the next five years. It has taken eight months to work on the blueprint in consultation with the Karnataka State Fire & Emergency Services and Janaagraha. The entire plan has been divided into two phases. Phase 1 will be from 2018 to 2020, and Phase 2 from 2021 to 2023.” Venkitachalam also added that they are working with the fire department and will have detailed discussion on implementing the blue print in their policies and programme.

Another member Sumit Khanna mentioned that the government should bring in stringent policies to ensure that fire safety and equipment is implemented in all commercial and residential buildings.

“For example, the owner cannot pay property tax until you have received a No Objection Certificate from the department concerned regarding fire safety. In malls emergency exit doors are often locked. These are the minor things, but lead to massive fatalities taking away people’s lives,” he added.

Beyond Carlton was formed after the 2010 Carlton Tower fire incident in the city, which claimed nine lives and injured 70 people.

He said, "I believe that engaging with civil society and through them involving the community at large to practice preventive measures. It is a very important step in dealing with disasters, including fire incidents.”

he said. “I believe that the contribution of Beyond Carlton in bringing about awareness in this regard has been highly appreciable and this particular report is a technically sound one and we will integrate into all ongoing projects, as well as those we are planning for the coming 5-6 years." 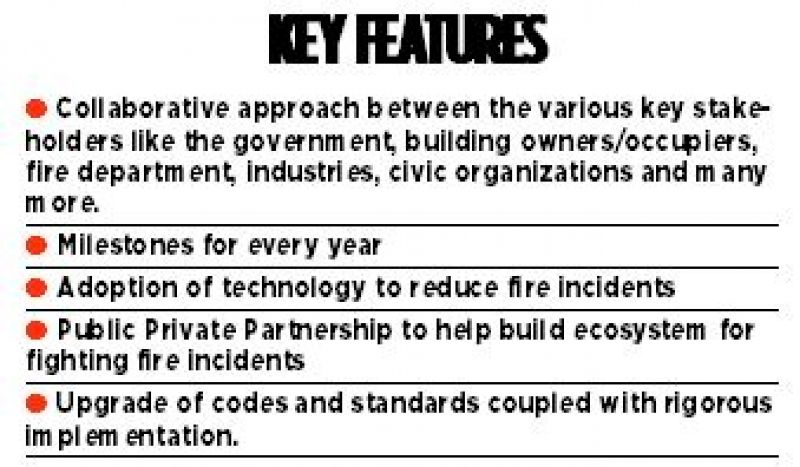