Left: Locals remove the body of Kapu activist who committed suicide in Kakinada; right, members of the Kapu community had set fire to a train in Tuni during their protest on Sunday (Photo: DC)

Kakinada: A member of the Kapu community ended his life in Kakinada on Monday by hanging himself from the Collector's office building, a day after thousands of members from the community staged protests in Godavari district demanding reservation. Authorities recovered a suicide note from the man who has been identified as Venkataramana Murthy alias Suribabu.

In his note, he said he ended his life because the government did not include Kapu community in the Backward Class category and also failed to accord special status to Andhra Pradesh. The note rues that despite students from the community getting more than 90% marks, they fail to get admissions in prestigious institutions and the same situation prevails when they try to apply for jobs. The letter hit out at politicians for making false promises during elections. 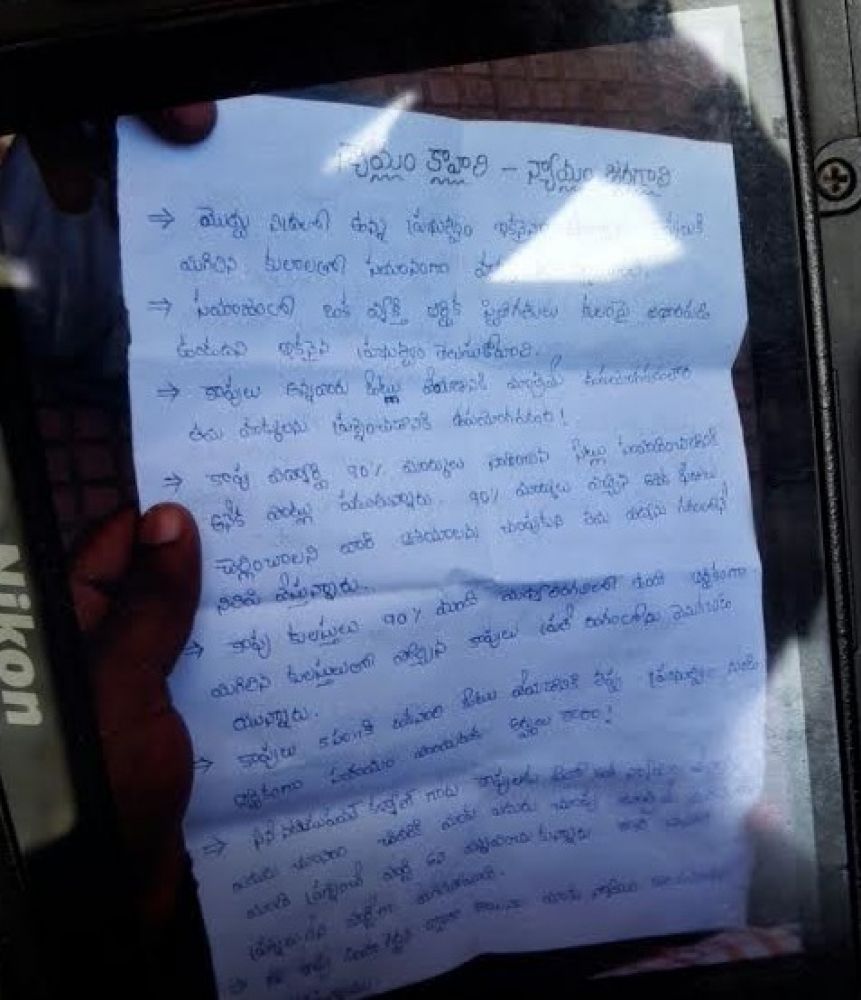 The suicide note written by the activist (Photo: DC)Police said Suribabu did not have any political background and was a TV mechanic who lived in Kakinada.

YSR Congress chief Jagan Mohan Reddy expressed his grief over the suicide and appealed protesters not to resort to such extreme steps. He conveyed his condolences to the family and asked the Government to look into the situation.

Earlier, Kapu leader Mudragada Padmanabham threatened to go on an indefinite fast over the community's demand even as police stepped up security in Andhra Pradesh's East Godavari district, which had witnessed violence over the issue.

"I will go on an indefinite fast even if I am put in jail. The government is conspiring to create a terrible atmosphere and to defame the Kapu community," Padmanabham, who is leading the stir, told reporters in East Godavari district.

Union Minister M Venkaiah Naidu on Monday condemned the violence during a stir by the members of Kapu community in Andhra Pradesh seeking reservation and said it "weakens" the cause.

"Violence at Kapu reservation stir is unfortunate and condemnable. Should be avoided. Violence weakens the cause," the Union Minister for Parliamentary Affairs and Urban Development said.

At least 15 policemen, including a senior district police officer, were injured on Sunday when the stir by Kapu community members turned violent as the agitators went on rampage, set four coaches of Ratnachal Express on fire and blocked a National Highway in East Godavari district.

Amid coronavirus, Amma Canteens to feed the poor in Tamil Nadu

Of Tablighi Jamaat Nizamuddin controversy, its link to coronavirus in India