In a speech, Ramgopal Yadav said that Shivpal Yadav had been misleading Mulayam while making wrong decisions.

Consequently, Shivpal Yadav was 'sacked' as UP's SP chief and Amar Singh 'expelled' from the party at the national executive.

“SP national convention proposes that Mulayam Singh Yadav be considered as supreme leader of the party and top brass will take guidance from him,” Ramgopal added.

Speaking at the event, Akhilesh Yadav said that Netaji would be the most happy if Samajwadi Party returned to power following the upcoming UP polls.

"If there is a conspiracy against my father, as his son it would be my responsibility to expose it," Akhilesh claimed.

The wounds in the Samajwadi Party (SP) appeared to split open again on Sunday, with party chief Mulayam Singh shooting off a letter to party workers asking them not to attend the national executive meeting called his by cousin Ramgopal Yadav.

According to reports, Singh also warned of ‘strict action’ against those attending the convention, and added that it was unconstitutional.

However, Uttar Pradesh Chief Minister Akhilesh Yadav, who was first expelled and then taken back into the SP by his father Mulayam, was in attendance at the meeting. 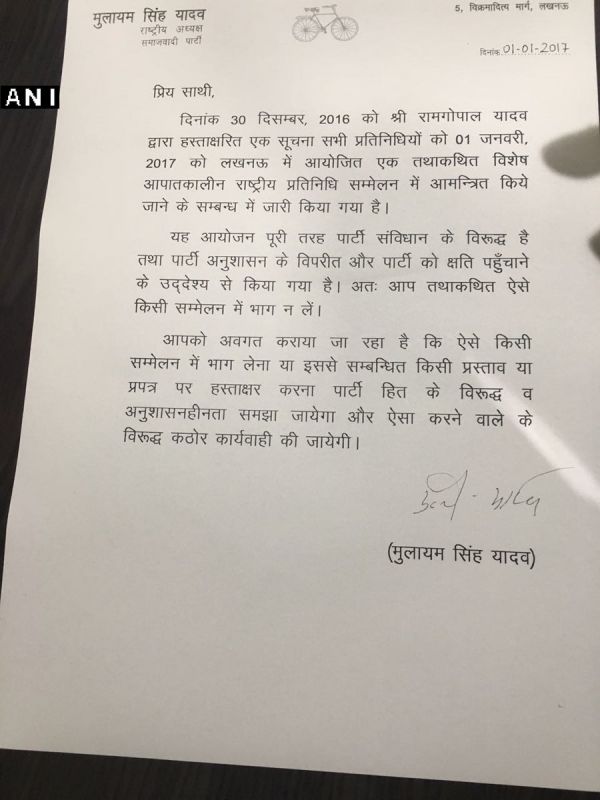 Youth party leader Arvind Giri has claimed that the convention would discuss proposals for appointment of Akhilesh as the national president, removal of Shivpal Yadav as the party state chief and removal of tainted candidates from the party list.

Leaders close to Akhilesh made rounds of the Janeshwar Mishra Park, the venue of emergency convention in the state capital, to check the preparations till late last night where seating arrangement for more than fifty thousand persons has been made.

However, just on Saturday night, Akhilesh, after being reinducted into SP, had told supporters that they must ‘save the party’ and that ‘Mulayam Singh is your leader, but he is both my leader and my father’.

India, UK to conduct clinical trials of Ashwagandha for promoting recovery from Covid