Lack of awareness on legal adoption a boost for agents.

Hyderabad: Despite strict guidelines to prevent illegal adoptions for curbing child trafficking, unlawful adoptions are still taking place without any hurdles. The adoptions which were once quite common in rural areas have now spread to the city.

Since January, three cases were reported from different parts of the city. In all the cases, the newborns were illegally procured from their biological parents by luring them with money. Police said that the childless couples who had adopted the kids were from well- to-do families and are literate when compared to the biological parents of the kids.

While investigating these cases, police said that lack of awareness on legal adoption methods by the agencies concerned is becoming a boon for the agents to exploit parents. “Even educated persons, who are aware of the consequences of illegal adoptions, resort to illegal means raising concern,” a senior official said.

Central Adoption Resource Authority (CARA) has laid down clear guidelines on legal adoption methods and the women and child welfare department is entrusted with the responsibility of spreading awareness on the process and the benefits of the scheme, but there is very less done by them in this regard.

As per the CARA guidelines, parents who cannot take care of their children can relinquish the child to government’s custody and any couple willing to adopt a child should register themselves online through CARA and adopt a child. 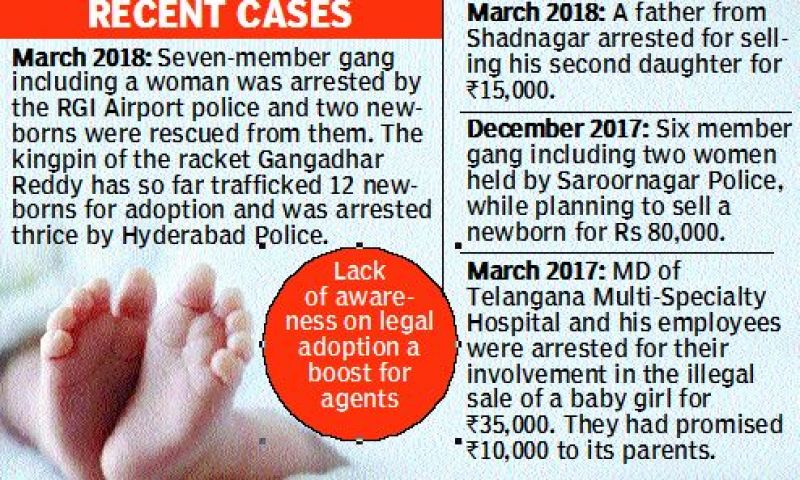 “In this process, the couple who wish to relinquish their child have to do it for free, but if they do it directly, they get a good amount from the adopting couple which is one reason illegal adoption is taking place. As the legal process is time- consuming, the childless couple approach agents, who take advantage, and search for babies at a good price,” a senior police official said.”

“Cases are booked and suspects are arrested often based on information about these illegal activities, but rarely the women and child welfare department reports illegal adoptions or child trafficking ,” an official said.”

They opined on the need for creating more awareness on the legal consequences of illegal adoption. “The police department and the women and child welfare department can work together on this aspect,” they said.

After ban on wheat, India restricts exports of flour, other derivatives