When Dera Sacha Sauda chief paid a fine in Ooty

Ooty: Dera Sacha Sauda chief Gurmeet Ram Rahim Singh, who has hit international headlines after the rape case verdict against him on Friday that saw violence breaking out instantly in Harayana and its surroundings, had paid a fine at the famed Government Botanical Garden (GBG)  here in Ooty for violating norms and riding a motorbike in the garden lawns when he visited here in 2011 summer. The then garden officer still remembers the early morning encounter with Gurmeet then. 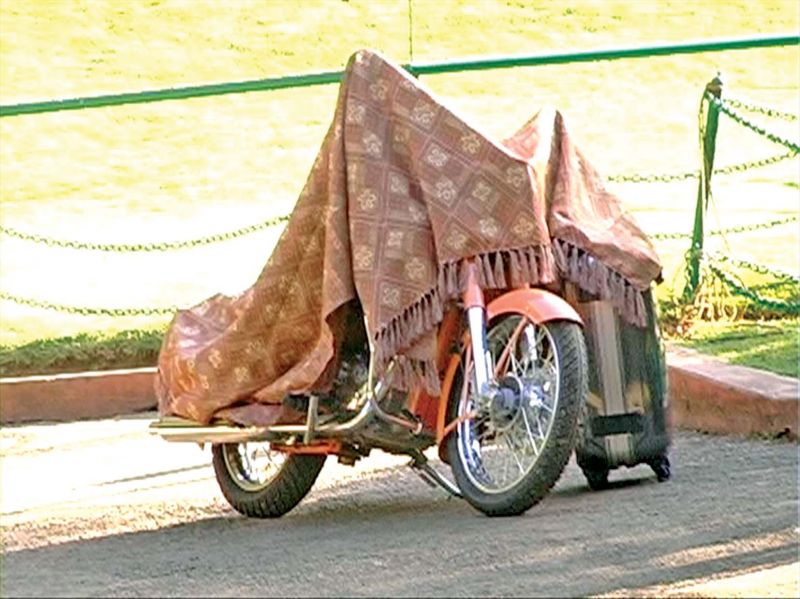 The bike used by Gurmeet Ram Rahim Singh to ride in the Govt Botanical Garden lawns in Ooty in May 2011 covered by cloth after the officials seized it.

Recalling the early morning encounter with Ram Rahim Singh and his group at GBG on May 16, 2011, Mr. M. Pragasam, a retired assistant director of Horticulture, said the 'Baba', his kin and others who accompanied him had entered GBG around 6.30 am, telling the staff at the entry gate that they wanted to take a walk.  Suddenly, a motorbike and couple of horses followed their group.

"Within minutes Ram Rahim was seen riding the bike in the garden laws.  When the staff on duty confronted him, his assistants pleaded with them not to disclose this and covered the motorbike using a cloth. Then his group occupied the entire portion of the Band Stand  area in GBG and blocked the entry of other visitors there as Ram Rahim was doing exercise which was being shot by his assistants using video cameras," Mr.Pragasam said. Their attempt to serve breakfast to the priest near the India Map area further led to a kind of chaos.

Mr.Pragasam said at that juncture he interfered in the scene and after an enquiry imposed fine of Rs 700 on Ram Rahim for violating norms and crossing the limits in GBG. Ram Rahim paid the fine and also the dues of using cameras inside the GBG, Mr.Pragasam pointed out, adding, this incident was still fresh in his memory.