Aerial view of the two houses damaged in the illegal cracker unit blast in Kancheepuram on Sunday(Photo: DC)

Chennai: Three persons including a woman were injured when two houses were damaged after an unlicensed cracker making unit running in one of the houses exploded in Kancheepuram on Sunday. 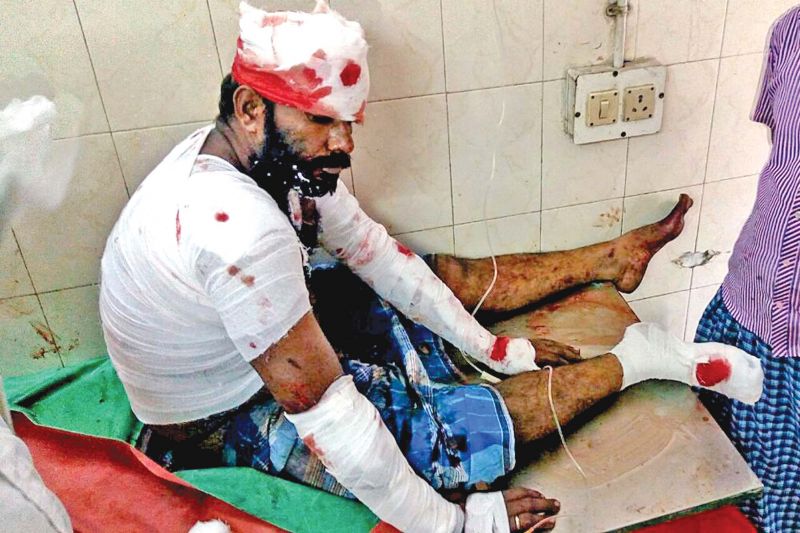 One of the injured receiving treatment at KMC hospital (Photo: DC)

Police said the incident took place in the house of Bhoopathy, 38, on Palla Street, just behind Kancheepuram Collectorate on Sunday morning. The injured were identified as Bhoopathy, his wife Komala and Mohan, a visitor to the house.

Police said that Bhoopathy and his wife Komala were engaged in making crackers in the house when Mohan came with an invitation to his relative’s wedding.

“Komala went to make coffee in the kitchen when the explosion happened. In the blast, all the three were injured. The asbestos sheet roofed house collapsed in the impact along with their neighbour’s tiled house,” police said.

All the three were admitted to Kilpauk medical college where the condition of Komala is said to be serious. During the primary enquiry, police found that Bhoopathy had been procuring explosive powder used to make crackers from his cousin Ramesh, who runs a cracker unit in the Tiruvannamalai.

Bhoopathy used to make mainly ‘Lakshmi’ crackers at home and sell them locally. His crackers had been very popular in the area because they were cheap as he used to sell them at Rs 2 per cracker. His crackers were widely used for temple festivals and also for funeral processions locally.

Police registered a case against Ramesh and Bhoopathy and said that Ramesh, a resident of Palla Street, is absconding. Following the cracker unit explosion, Kancheepuram district collector and senior officials visited the scene.