Eight CRPF men were killed while 23 others were injured after militants ambushed a CRPF convoy in Pampore area of Pulwama district on Saturday (Photo: H U Naqash)

Srinagar: In a major terror strike, two militants armed with assault rifles killed eight CRPF jawans and wounded 23 others on Saturday after ambushing a convoy bus travelling through the highway town of Pampore.

Officials said that both the militants were killed after they were engaged in a gun battle by a Road Opening Party (ROP) of the CRPF.

The authorities termed the incident as ‘deadliest terrorist attack’ in three years in Jammu and Kashmir. The militants opened fire on one of the buses in a 6-vehicle convoy of CRPF’s 161 Battalion near Nambalbal, Pampore, 17-km south of Srinagar, at 4 pm.

Confirming the casualties, Bhavesh Choudhury, spokesperson of CRPF said that the convoy was returning from a firing range after practice when they were attacked by the militants carrying Kalashnikovs. 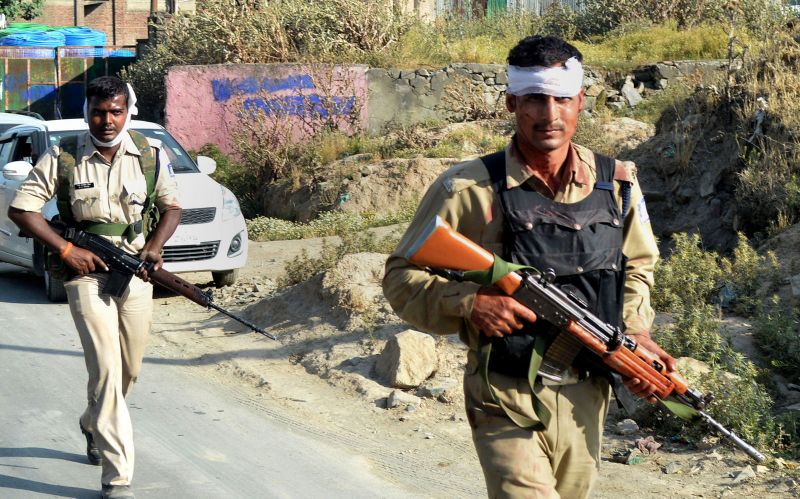 The injured CRPF jawans have been admitted to Army’s 92-base Hospital at Badami Bagh cantonment. (Photo: H U Naqash)

The injured CRPF jawans have been admitted to Army’s 92-base Hospital at Badami Bagh cantonment.

At least half a dozen of those injured are critical, reports claimed and added that two of the eight CRPF jawans died on the spot whereas six others succumbed to their injuries on way to or in the hospital.

J&K police chief, K Rajendra Kumar, and CRPF Inspector General (Kashmir range) Nalin Prabhat, said that the attackers appeared to be Pakistani nationals and could be cadres of the Lashkar-e-Tayyaba.

Earlier in February, three CRPF jawans, two Army officers and an employee of the J&K Entrepreneurship Development Institute (JKEDI) were killed in a similar standoff between security forces and militants at Pampore, near the Srinagar-Jammu highway.

On June 3 this year, three Border Security Force (BSF) jawans were killed and five others wounded in a sneak rifle fire by Kashmiri militants at Bijbehara, also along the Srinagar-Jammu.

Chief Minister, Mehbooba Mufti, strongly condemned Saturday's attack saying, “The only purpose of such acts of violence is to add to the tragedies and miseries of the people and subvert the Government’s efforts aimed at bringing permanent peace and prosperity to Jammu and Kashmir.”

She added that the elements inimical to interests of Jammu and Kashmir have always tried to derail the peace efforts and the latest militant strike at Pampore was again aimed at subverting the peace and development initiatives launched by the government.

Expressing solidarity with the bereaved families of the CRPF personnel, she also prayed for early recovery of the injured including civilians.

“I would like to express my sincere condolences to the families who have lost their loved ones in today’s dastardly militant attack,” she said.

Lashkar-e-Tayyaba claimed responsibility for the Pampore attack and said that, at least, 12 CRPF personnel were killed and more than twenty wounded. The LeT spokesperson Abdullah Ghaznavi telephoned Srinagar journalists to say that two members of its ‘Fidayeen Squad’ carried out the attack and threatened such acts would be repeated in coming days. “It was a successful attack and such type of attacks will continue in future as well,” he said confirming that both the attackers were killed in the ensuing fire fight.

Meanwhile, two militants were gunned down by Army troops in an encounter raging in Uri sector along the Line of Control (LoC) in Jammu and Kashmir’s Baramulla sector.

Army officials said that the soldiers of its 17 JAK Rifles deployed in the Lachipora forest area of Uri intercepted a militant group late Saturday afternoon leading to the encounter which was continuing as reports last came in.

Child marriage averted in time by officials in Warangal