A case booked in 2016 with the Bowenpally police against Calvin has not seen the light.

Hyderabad: Calvin Mascarenhas, the mastermind behind the LSD drug racket that penetrated schools and colleges and Tollywood, has a history of drug cases.

A case booked in 2016 with the Bowenpally police against Calvin has not seen the light and police have no clue about its status.

Bowenpally inspector B. Sridhar said, “Calvin was arrested by the Task Force and handed over to us. We booked him under the NDPS Act. The case was transferred to the Anti Narcotics Cell of the Central Crime Station. We don’t know its status.”

Excise sleuths said Calvin had confessed during interrogation that there was a case under the NDPS Act booked against him in 2013, which his advocate K. Revanth Rao Gopalaswamy denies. According to Mr Gopalaswamy the e-courts website of the Metropolitan Sessions Judge Court of Nampally, Hyderabad, showed the case against Calvin as “Uncontested by the State’. 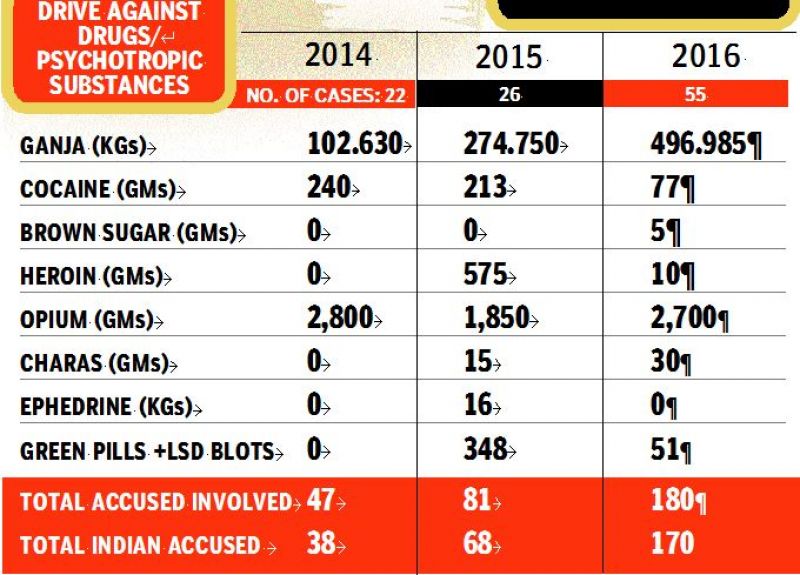 Mr Gopalaswamy said the case booked against Calvin in 2016 was the first against him. “There is no other case pending against him,” he said.

He claimed that the Bowenpally police had filed a false case against Calvin in 2016, alleging that he was in possession of seven LSD blots. After he was picked up his brother filed a habeas corpus petition (which requires a person to be brought before a judge) in the High Court,” he said.

The High Court in its order on the petition said the Assistant Government Pleader had produced a copy of FIR /2016 registered with the Bowenpally police and stated that Calvin was in judicial custody. The writ petition was then dismissed.

Excise enforcement director Akun Shabarwal said, “Calvin himself confessed that there was an NDPS Act case against him in 2013 in Bowenpally. We are not aware of the 2016 case. We will be opening a history sheet against Calvin and we will keep him on the radar. We were told that he was under the watch of the Narcotics Control Bureau too.”

CCS Anti Narcotics Cell inspector A. Ravi was not available for a comment.

Cop, spouse and daughter shot dead by militants in Pulwama