6rank given to Telagana for the highest number of missing children.

Hyderabad: The police, when investigating cases of girls or women going missing, or a wife murdered by her husband or a wife killing her husband, tend to assume that some sort of love affair is the motive. They do not look for other possible reasons such as mental depression, peer or career pressure, or harassment of various kinds that may have led to the incidents.

The motive for 90 per cent of missing cases of girls is put down to a love affair or if the person is married, then to an illicit relationship. This conjecture of the police is  believed by the families of the victims and the accused.

“Every missing person or murder case has its own story. For students (minors) peer pressure, humiliation at the hands of teachers, and not securing target marks or failing to make it to a prestigious institution could be the trigger. Girls especially, feel humiliated if they are insulted openly or fail in academics,” says Supreme Court lawyer S. Vani.

She says the number of cases of women eliminating their husbands has grown, but in a majority of cases it is not a love affair but harassment that is the motive.

“I know of a case where a husband sexually abused his own daughter and the wife chopped him. Out of 100 cases of women who have killed their husbands, 75-80 are due to harassment or sexual abuse of the immediate family,” she says. In the case of husbands killing their wives, it may be due to him having an extra-marital affair or for dowry, advocate Vani says. Alcohol is another cause of violent crime.

“Like any crime, the motive could be different, but the ‘love angle’ is claimed in the majority of  cases by the police and highly publicised,” said the lawyer.

Human rights activist P. Harish added that the police investigation must not “wipe off the bitter reality of human trafficking, kidnapping for organ donation and begging racket, which the law and order machinery has been unsuccessful in curbing and is a matter of shame to the department.”

He says that in the majority of missing cases or couple disputes leading to murder, after the FIR is booked, there is rarely a detailed investigation into the case to get to the bottom of it, unless there is pressure from the victim’s family or orders from the top. “By informing the media that the crime is in connection with a love affair, the chapter is closed,” he says.

The National Bureau of Crime Records, the agency responsible for collecting and analysing crime data nationwide, acknowledged in its 2017 report that minors tend to run away from school due to education pressure and in some cases, girls elope fearing the family will not approve of their chosen partner.

Psychologist Ratna Devi said, “The reasons for children going missing includes abuse at home, kidnapping, abduction and trafficking. These children could be exploited and abused. These children are often kidnapped or trafficked for prostitution, organ donations, employment, and such activities. Good parenting is a solution. Regular parent-children interaction can help bring down the number of missing cases.” 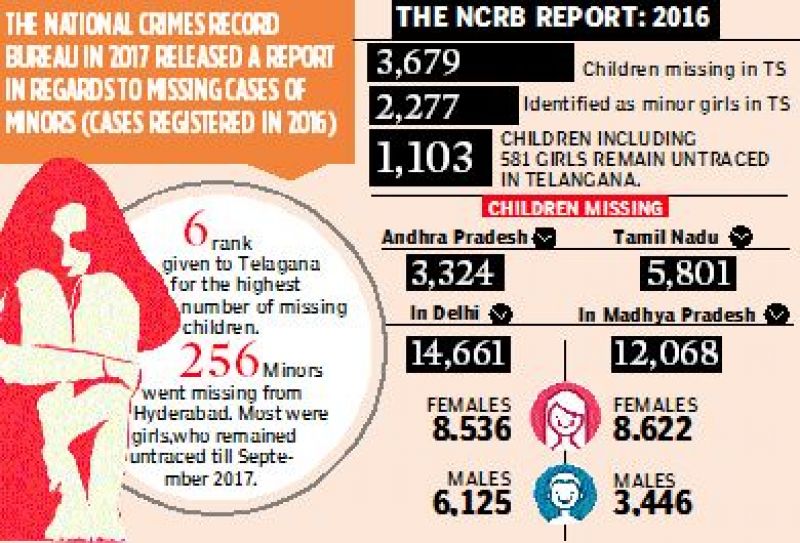 T. Shriya Prasad, 19, was studying BTech, second year in a university in Andhra Pradesh. On February 12, 2016, her mother Ms Yovnne Prasad, a resident of Vayupur in Secunderabad, received a call from the university informing that her young daughter had committed suicide by hanging herself in the hostel room.
Based on the suicide note found in the room, the Vizag police concluded it was case of ‘Love Failure’. A post-mortem was performed even before the parents reached the university. The same day, the body was brought to Hyderabad and buried in Ammaguda graveyard.

The FIR stated the girl died at 5 pm on February 12 but her Facebook account was active at 5.24 pm. Parents in consultation with a handwriting experts found the suicide note.

The words ‘Miss u 2maro darling’ written in it did not match with her handwriting (a copy was showed to this newspaper).

And on the same day at around 12.40 pm, Shirya spoke to her mother about her NCC exam and sounded fine. Parents alleged that her death was manipulated to make it look like suicide. The girl’s parents filed a petition in the High Court seeking nod to re-conduct the post-mortem.

The HC directed the Cyberabad police commissioner to exhume the body. In March 2016, the body was exhumed and a post-mortem was done again. “We also filed a petition in the HC seeking the status of the investigation by the police. The court asked the police to file their counter, in which the police mentioned that they had examined the witnesses, special teams were constituted to investigate the post-mortem report and the investigation was still in progress. Over two years, the police have not been able to conclude that it was a suicide due to a love affair, despite the first FIR claiming it was,” said a source. The family refused to comment since the case is still in the HC.

June 2017: The mysterious missing case of a class 10 student, Poornima Sai, who went missing from her home in Nizampet, kept cops on their toes.
The initial investigation probed the ‘love affair’ angle. After a missing case was booked, Cyberabad police formed 14 teams to trace her. Forty days had passed but Poornima could not be found. Police interrogated the family, schoolmates and even friends she made online.

A month and a half later, the Cyberabad police received a call from a Mumbai-based NGO. Poornima was found near Dadar. She is now living in Dongri Balsudhar Gruh. The girl, like any other day, left home on June 7, 2017, saying she was going to school, but boarded a train to Mumbai with the desire to become an actress and work in films. It was a planned move.

On landing in Mumbai, she took the help from the regional police for shelter but gave a false name – changing her name from Poornima to Anika Shree —and said she was an orphan. The initial investigation that claimed it was the result of a love affair was ruled out as the girl confessed that she had Bollywood dreams and fled to Mumbai on her own.

A minor girl (resident of Saifabad and an Inter first-year student) went missing from her home in February 2017. The parents lodged a complaint at the Saifabad police station after the girl didn’t return from college.

There was no trace of the girl as her phone was switched off. The initial investigation revealed that she had not gone to college the day she went missing. The police were probing the ‘love angle’ in the case. They reached out to the college, spoke to her friends, but found no leads. Until then, the family was under the impression that it was indeed a love affair and the girl had eloped with somebody. The news spread among relatives and in college.

Three days later, the mother received a call from an unknown phone number. It was her missing daughter. She was taking shelter in one of her friend’s house in Kukatpally. The (boy) friend was studying in a different college and lived alone as a bachelor. The Saifabad police tracked down the location of the phone number. The girl was traced. During counselling, the police found that the girl had left home due to constant fights between her parents.

An uncle of hers made had physical advances on her. The family suppressed this matter. The parents refused to send her to the state-run counselling centre and took her home.