Kolkata: The General Manager of the Eastern Railway on Monday received a letter threatening to kill the West Bengal Chief Minister Mamata Banerjee and an IED explosion at the Howrah Station.

The letter claiming to be from a man belonging to the terrorist outfit Jaish-e-Mohammad (JeM), demanded that the General Manager arrange Rs 50 crore, “failing which lakhs of people will be killed in an IED explosion at Howrah Railway station”. He added that if his demands are not met, his “organisation will kill Mamata Banerjee”.

The letter was undersigned as Subhas Chandra Das, a former employee of Doordarshan and also had his number.

The letter claimed that the perpetrator had provided shelter to a few other members of JeM in a flat that he had purchased during his years at Doordarshan. 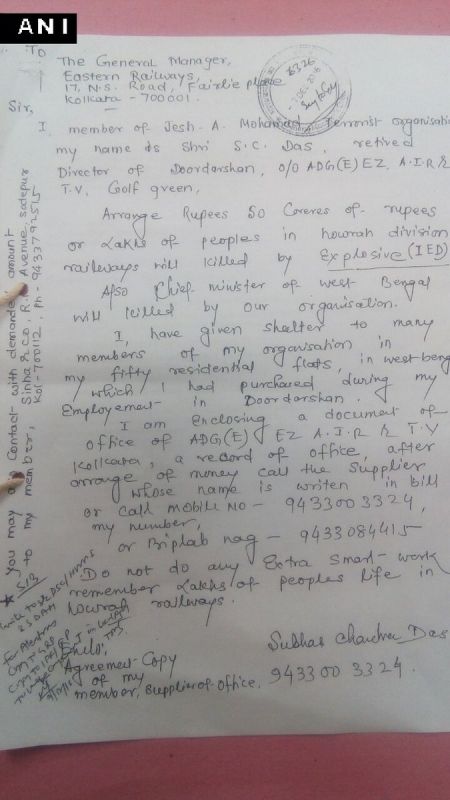 The letter sent to the General Manager of Easter Railway.

The letter was handed over to the police and the security at the Howrah station has been increased.

“After receiving threat letter we conducted probe but nothing was found from the phone number and address mentioned in it,” Aryan Mahapatra, CPRO, Eastern Railways, told The Indian Express.

When contacted by Deccan Chronicle (DC), the phone was answered by Subhas Chandra Das, but he confirmed that although his contact and employment details matched, the letter was not written by him.

"I had gone to the Hare Street Police Station. When I saw the letter, I told them it was not my handwriting," he told DC.

He claimed that the police had let him off and asked him to be cautious.