Kochi: Two Rajasthani natives were arrested on Monday after the cops raided a flat near Kacherippady here and seized nearly eight kilogram illegal gold smuggled into the financial capital from Mumbai for distribution to various jewellery shops. The arrested were identified as Kundan Singh (36) and Prahlad (42).

Besides the gold in the form of ornaments, Rs 4 lakh in cash too were recovered during the raid. According to cops, the duo evaded tax and smuggled in the gold into the state via train. Sales Tax officials slapped a notice on the duo asking them to levy Rs 1.21 crore as fine. 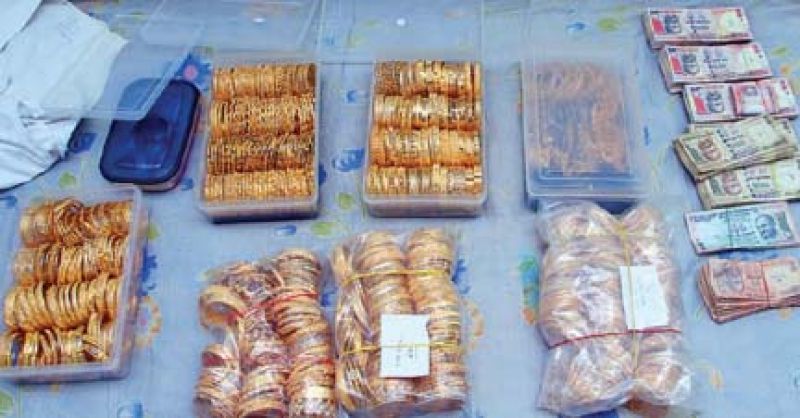 The gold and cash seized from the duo. (Photo: DC)

“We got information about a racket operating out of a flat at Providence Road near Kacheripaddy following which the raid was conducted. The duo admitted to have committed the offence earlier too. They used to hide the gold inside specially made jackets and by travelling in trains,” police said.

Meanwhile, the police have launched a probe into the parallel routes through which finished gold is being smuggled into the state at the behest of a few jewellery brands.

“The preliminary probe has revealed that the duo had been staying in Kochi for the past eight months and travelled between Mumbai and Kochi several times to bring finished gold for jewellery groups,” said Arul RB Krishna, Deputy Commissioner of Police, Kochi city.

The duo used to transport raw gold, purchased from jewellers here, to Mumbai and return with consignments of gold ornaments, which is then distributed among local vendors. “They travel either by road or by trains so as to escape the high-security apparatus at airports", he said.