The Immorals of Marine Drive

The act that Shiva Sena activists dared to do at the Marine Drive is a wakeup call for everyone.

Morality is probably one of the frequently discussed subjects these days when it comes to expressing affection towards a person one likes. What does morality – the ability only human race claims to posses, of knowing the distinction between right and wrong – allow society to do? Charge a person sitting with another person of different gender with cane and let go scot free a criminal who has raped a three-year-old or an 80-year-old woman! The so-called progressive society of Kerala seems to be in a state of confusion. The act that Shiva Sena activists dared to do at the Marine Drive is a wakeup call for everyone. Can a set of goons just impose on people their own rules that they feel are a must to uphold the moral thoughts of society? The irony was not lost on anyone that women were beaten up for sitting with their male friends on a day when the entire world was ‘celebrating’ womanhood. Once something that triggers the public conscience happens, protests and outrage follow.

And what is better than a Kiss of Love to protest against moral policing! The protest had created a wave of reactions back in 2014 when it was kickstarted. The question however, is not whether the protests serve the purpose, but what the protests are really for. As writer Sharadakutty puts it, “It is a fact that Kerala, the first state to attain full literacy, is far more developed than many other states. But is the development actually taking us forward or backward is a concern. The very incident of Shiva Sena activists beating up people at Marine Drive is a clear example of backwardness of our society. All those people who are undoubtedly goondas had a body language that explained their ugly thoughts of being superior to women. 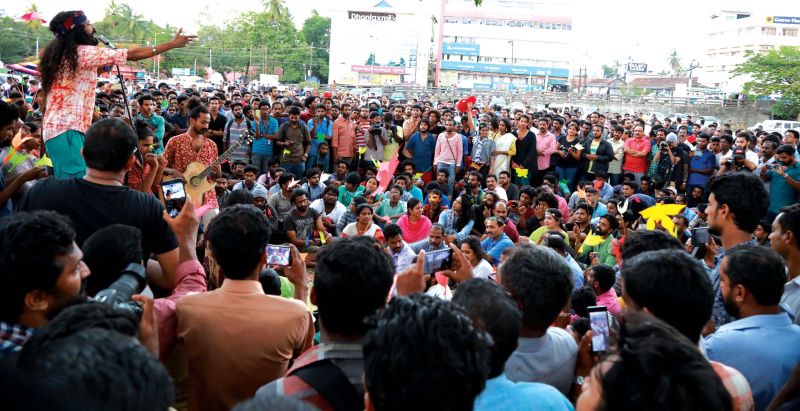 Band ‘Oorali’ protested the moral policing by putting up an impressive performance at Marine Drive on Thrusday.

And their explaining the act as something to bring in discipline and stop atrocities against women is not justifiable. Therefore, women who declare their independence and men who respect that are to be created. Fighting for rights is not always possible because it will at some point lead to violence.” She added that boys need to be taught that they do not have any right on women with whom they associate with and that they are individual beings who have the right to choose the way they live and look upon things. A public outrage has been witnessed across the state against the recent moral policing like the one at Thiruvananthapuram     where a couple went live on Facebook when police questioned them and another unfortunate incident that drove a 24-year-old to suicide after being assaulted by a set of people who unleashed ‘immoral’ charges on him and his friend. However, not everyone is sure about the extent of impact protests like Kiss of Love will bring about.

Commenting on this, Lakshmy, a student of St. Teresa’s College, says, “Kiss of Love is like an act a child does when he/she is being chastised by elders for doing it. It will not change the attitude of moral police. The government needs to take responsibility and deploy police to ensure that the freedom of an individual is not intruded upon. Police, in association with educational institutions and other organisations, should take care that nothing unfortunate happens. The Constitution gives every adult freedom to choose his/her way of life. I was literally annoyed by the Shiva Sena incident; it is unfortunate that goondas have taken over the political parties in our state.” Even more unfortunate is that people who come to public places to spend quality time with family are also being offended by the questions police ask them. Young actor Shane Nigam is of the opinion that society keeps on judging people which is the root cause of all these problems. “Stop judging people and you won’t be judged either,” he says.

Kiss of Love has succeeded in creating a stir in the public, according to Sudeesh Sudhakaran, one of the organisers. He applauds when the frustrated Malayali comes out and protests against injustice in the name of culture and tradition. “Many people from the transgender community actively participated in the protest, which clearly is an indication that they want to break the chains and prove to society they too have feelings and that expressing it does not hurt morality. Our fight is against the patriarchal set up of society and I believe that it is definitely making a difference.” However, the actual turnout of youngsters at the protest venue was far from impressive and Sudeesh says that kids even though willing to take part, were being held back by the fear of facing their parents.