CCTV footage of the duo (Saravanan and Ghouse Basha aka Riaz).

Chennai: A sports bike used by two chain-snatchers including a notorious suspect implicated in two murder cases led to their arrest on Friday and recovery of over 55 sovereigns of gold jewels besides the solving of as many as 18 chain snatching cases reported in T. Nagar police district.

The duo has been identified as Saravanan (23) of Erukkanchery and Ghouse Basha aka Riaz (23) of Pattalam. Ghouse Basha is a small-time racer whose bike gave away his identity while Saravanan was set free after being detained under Goondas act as a sequel to his implication in two murder cases reported in the City. 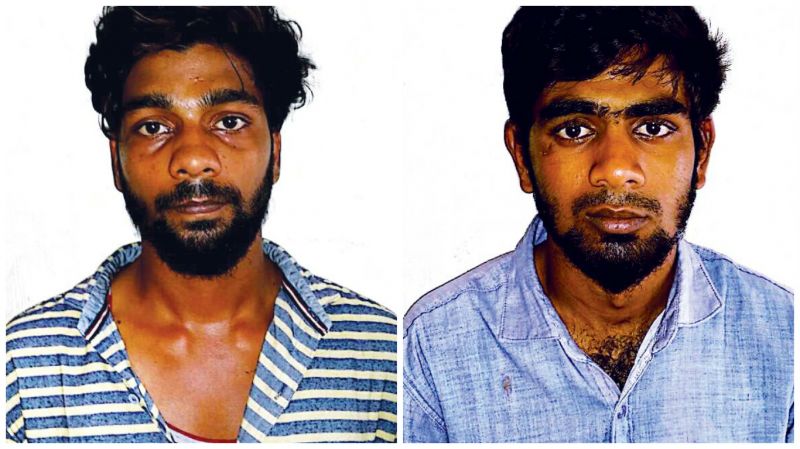 Saravanan and Ghouse Basha aka Riaz were arrested on Friday.

The two had been on a chain snatching spree in the past 2 months but landed in the police net after DCP (T. Nagar) P. Saravanan formed a special team after 3 incidents of chain-snatching were reported in Virugambakkam on March 2.
The perusal of the CCTV footage led to the suspects who were also found stealing a Pulsar bike on the same day and using it for all three offences.
The physique of the duo matched those spotted in past chain-snatching incidents reported in T. Nagar, Ashok Nagar, Kodambakkam, Teynampet, Mambalam, Vadapalani, Virugambakkam, and Valasaravakkam.

The image of the sports bike they used in the area was circulated among the racing circuit in the City, which helped establish the identity of the duo.
Sources said the cops trapped Ghouse Basha, who was holed up in a lavish lodging house with his girlfriends and his accomplice Saravanan too.
Both had a liking for smoking ‘pot’ and were part of a close-knit group that took ‘trips’ in Vyasarapadi.

Saravanan who came out from prison was impressed by the lifestyle of Ghouse Basha who used to come on different super-bikes to parties to smoke ‘joints’.
Learning that snatching mobiles was easy money, the duo started with mobiles. After robbing a dozen mobiles, their interest switched to chain snatching when Saravanan watched Metro, a movie that features ‘chain-snatching’ as its central theme.

Pakistani, Bangladeshi Muslims should be thrown out of India: Shiv Sena in Saamana