Jawan, cop jump into Hussainsagar Lake, save woman from suicide

The police has been able to discover that she is a graduate who had come to the city to buy text books and decided to meet her ex boyfriend.

Hyderabad: High drama prevailed at the Hussainsagar Lake at 7 am on Friday, when a woman jumped into the lake in a suicide attempt and two men who saw what she was doing, jumped in after her to rescue her.

The two heroes were an NDRF (National Disaster Response Force) jawan and a police constable who happened to be passing by. As early morning walkers and office goers watched in amazement, the two men without a second thought dived in and attempted to rescue the woman.

The woman, a 29-year-old BEd graduate from Godavarikhani, at first resisted their efforts. Police Constable Yadagiri of the Gandhinagar police, who was first in the water, says he was out on a morning walk with his friends when he noticed the woman. “I saw that she was alive and could be saved and I just jumped in. However, it was not easy for me to pull her out as she was resisting, making me also lose my balance in the water.” 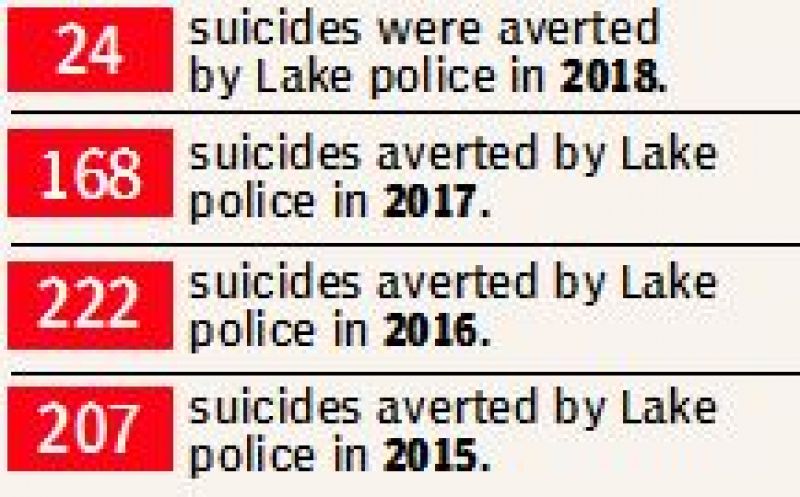 Noticing the commotion, NDRF constable, Janaiah, who was on his way to office at Mehdipatnam, stopped his bike, and asked if he could help. “I noticed that the man (Yadagiri) was unable to get her out and he was struggling so I jumped in to help. We both got her out,” said the brave man.

The rescue operation took just three or four minutes, said Mr Janaiah. He said he threw in a cable rope for them to hold on to before he jumped in to help. “She was successfully rescued and no CPR was needed as she was conscious,” he added.

The woman, whose name is not being revealed, was sent to Bharosa Centre by the Lake police for counselling.

The police have been able to discover that she is a graduate who had come to the city to buy text books and decided to meet her ex boyfriend, a resident of Rasoolpura, with whom she had been in a relationship for nine years. The two had mutually decided to end the relationship as the woman was to be married, but on Friday morning they did meet near old Love Hyd point at the Hussainsagar.  No one yet knows what happened and why she jumped into the lake.

The fence around the Tank Bund lake is too low, making it easy for people to jump in if they want to, said Police Inspector Dhanalaxmi of the Lake Police station

“We come across cases where people book cabs from far off places to commit suicide here. We have written to the concerned authorities to increase the height of the fence to put a stop to this, but in vain. We hope necessary action will be taken now,” she said.

The height of the fence must be increased to stop such tragic occurrences, the police say.

Higher officials of IG Battalion and the Police Commissioner of Hyderabad, V.V. Srinivasa Rao, commended the two men who averted the suicide attempt on Friday morning and awarded them `2000 each for their bravery and presence of mind.

“We were also told that we will be receiving a letter of appreciation,” said Mr Janaiah, an NDRF jawan attached to the 10th Battalion.

“The woman would have died within seconds but because of the timely act of the two brave men, she survived,” said Inspector Srinivas, Gandhinagar.
“I was called by the Commissioner of Police on Friday afternoon who appreciated my bravery and now I will be visiting Lake Police Station as well, where I was called for some more pats on my back,” said the proud police constable Mr Yadagiri.

'Godman' absconding after murder of businessman in Hyderabad