Paedophiles in Hyderabad use candies, chocolates to lure minors into sexual assaults

The survey revealed that one in five children is vulnerable to sexual harassment and it has also been reported that one in every four families did not complain about sexual abuse that they suffered.

Hyderabad: Chocolates and candies, the main delectables favoured by kids, are being used by elderly men to lure the minors into sexual assaults. The city has seen many such cases in the recent past, the latest one being the incident which came into light last week of a 13-year-old girl who was seven-months pregnant, after being raped by a 76-year-old man.

Every second child between 12 to 18 years suffers some sort of sexual harassment in India, revealed a survey this year. An alarming figure has surfaced in a survey conducted by 'World Vision India', an organisation working for human rights, which was responded by 45,844 children from different parts of the country.

The survey revealed that one in five children is vulnerable to sexual harassment and it has also been reported that one in every four families did not complain about sexual abuse that they suffered. 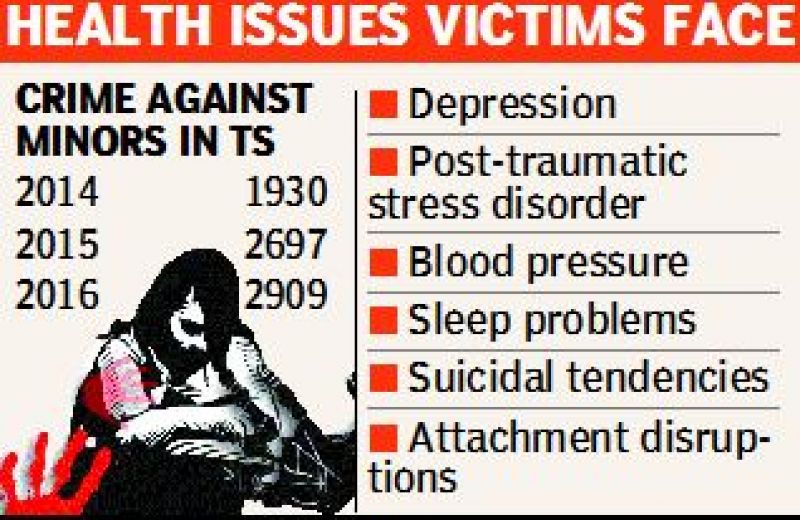 An increasing number of cases were registered in the state under different sections of the Protection of Children from Sexual Offences (PoCSO) Act, and pertains to sexual assault and sexual harassment of children.

“Telangana state alone noticed a total of 1,159 cases under PoSCO, 690 cases of child rape and 189 cases of sexual assault against children in 2016. More disturbing is the fact that these figures might not be revealing the actual situation, since many cases go unreported,” an official said, adding that agonised child victims are exposed to public while questioning at the police stations, extending their mental trauma.

On November 22,  N. Satyanarayana Rao, an 85-year-old retired railway employee was arrested by Kushaiguda police for sexually assaulting and raping a 12-year-old Class VII student by luring her with chocolates. Police said that the man had raped six girls over a  year by luring them into his house by giving chocolates and some cash. The incident came to light when the girls complained to their parents about his actions, who in turn approached the police.

“He first talks to them softly and gives them chocolates and money and slowly invites the children to his house where he sexually assaults and rapes them. He even threatened the girls to prevent them from talking or revealing about his heinous acts outside. The man has been doing this to the minor girls of the area since an year now,”  Additional DCP of She Team, Rachakonda, said.

“Out of the six, four have confessed that he had physically harmed them when they refused and later gave them chocolates to calm them down,” Alwal ACP said.

“Such pedophiles exploit a child as they can silence them by giving them chocolates and gifts. They groom the kids by smiling at them and making them feel loved and choose victims carefully as not every child falls prey to such men,” psychiatrist, Purnima Nagaraja said.

Raw materials for RTPCR can be supplied to pvt labs by KMSC: Kerala govt to HC

Kidnapper cannot be sentenced for life if he treats victim well: SC