Police recovers the body of M. Vikas from the Bathukamma Ghat on Necklace Road. Vikas and three of his friends had gone to the Ghat to swim. (Photo: DC)

Hyderabad: A 14-year-old student drowned at Bathukamma Ghat, Necklace Road, on Saturday morning when he went to visit the lake along with three of his friends.

Though his friends claimed that the boy accidentally fell while taking photographs, police later found that the boys got into the lake in order to swim, and the victim drowned as he did not know swimming. The boy, M. Vikas alias Vicky, Class 9 student of Gujarathi School, Raniga-nj, was brought dead to a private hospital, police officials said. Vikas and his friends had made plans to swim, but they had not told this to their parents.

Boy thought ghat was not deep
“At around 11 am, he and three friends reached the ghat. Thinking that it was shallow, they got down to the water to swim. Vikas, who did not know swimming, went a little ahead and drowned suddenly. His friends shouted for help attracting the locals. They also informed his father. Some locals and the police pulled him out after several minutes and he was breathing. They rushed him to KIMS hospital, where doctors declared him brought dead,” said Ramgopalpet sub-inspector V. Saidulu. 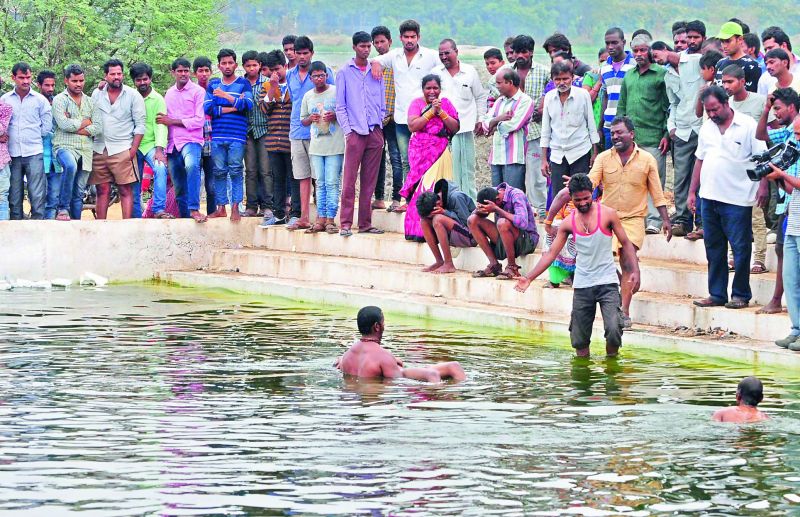 Police recovers the body of M. Vikas from the Bathukamma Ghat on Necklace Road. Vikas and three of his friends had gone to the Ghat to swim. (Photo: DC)

His friends, who feared that they will be blamed for the death, concealed the fact that they had decided to swim in the water. They initially claimed that Vikas was standing near the lake to take photographs and he fell into the water accidentally.

The locals said that the lake, which was used for Bathukamma immersion, currently holds water up to 10-feet deep. “The boys must not have been aware about the depth. And there was nobody to stop them getting down to the lake,” a local vendor said.

Vikas was a resident of Victoria Gunj. Since it was a holiday, he and his friends had left their homes saying they were going to hang out at a place near their home.

Vikas’s father M. Raju, an autorickshaw driver, lodged a complaint with the police about the incident. Ramgopalpet police has booked a case, and started an investigation into the incident to bring out all the facts.