Shape in which gold is smuggled into airports across the country. (Photo: DC)

Hyderabad :The flight history of passengers, the origin of the passport, the next travel destination after landing at the airport, are things that Customs officials analyse while checking out passengers who engage in gold smuggling.

Customs officials say overseas air travellers from some villages in Karnataka, Kerala and Maharashtra are always on their radar. All passengers from these communities, irrespective of history, will be screened. “They are experts in this profession and are into this business since decades.”

Tracking agencies have a strong intelligence network that includes agencies like the Customs, DRI, Police, Emigration and an informer chain spread across different locations to share information on smuggling.

“If any passenger from any of these communities land at airports, he will be intercepted irrespective of his profession and questioned. It becomes tough when officials tackle genuine businessmen, entrepreneurs, techies etc who also travel frequently,” customs sources said. 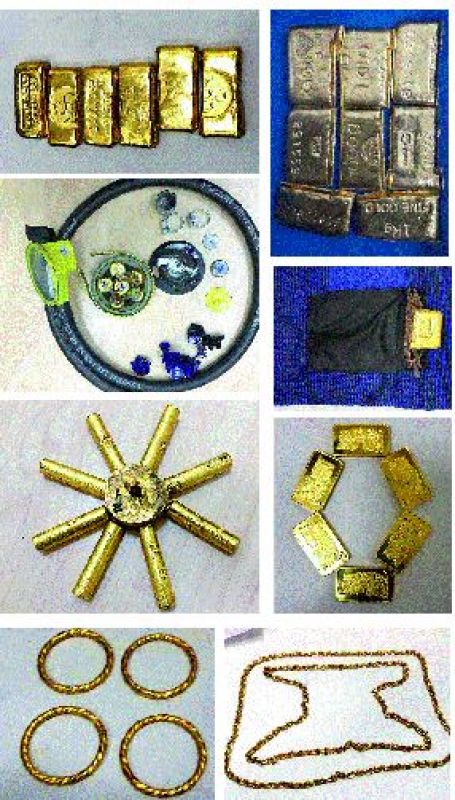 The various shapes in which gold is smuggled into airports across the country. (Photo: DC)

“In cities like Dubai, informers are more active in the areas where gold shops are located and are frequented by Indian buyers. They follow their movements closely and tip off their counterparts in India,” a retired emigration official said.

Customs officials say that though they act on the basis of tip off in many cases, they also follow other techniques to zero in on suspects. These techniques, however, may not always apply to seasoned and notorious smugglers who know how to react when in trouble and who can get help from their contacts in various departments in the airport.

“It is difficult to identify such men, but based on an assessment of their body language or physical movements, they can be trapped,” they said.

Officials say that in addition to technical support, human Intelligence plays a major role in identifying such people. “Every baggage that is scanned will be reflected on the screen. For different metals, the screen displays images in different wave-lenghths. Based on the fluctuations of the screen, an officer can identify what’s the metal hidden in the baggage. An experienced officer can easily locate even a single gram of gold in the baggage,” a source from RGI airport said.

Distress gives them away
A 33-year-old passenger who landed here from Dubai was under watch from the time he entered the airport in Dubai. The ‘informers’ who had been tracking his movements there alerted their counterparts at the RGI Airport. He was intercepted here and subjected to questioning.

His strange facial movements, discomfort while walking and embarrassment when he was held for questioning, as also his past travel history, convinced officials that he had things to hide. A round of questioning led to the revelation that he was carrying gold in his rectum.

Officials say that any person carrying gold in his rectum would experience extreme discomfiture, and this shows up in his movements. Any experienced officer can identify them. Such people can conceal a maximum of 1.2kg of gold in their rectum. The preparation for the insertion starts 48 hours before the journey. In this time, he would not take solid food and only liquids. This situation will worsen the person’s health, which will be reflected on his face.

After landing, he will be in a hurry to remove the gold bars that he concealed for around 24 hours. This will lead to tension, which would show up on his face. In such cases, though the staff members are permitted to extract the gold concealed in the body parts, the paux will not allow this, and instead would exert pressure inside and eject it.

“They will be sent into a washroom, where they eject the gold bars, wash them clean and dry them. Then, they place the bars in a packet given to them by the sleuths and hand this over to the escort.”

The same was the case with a person who was caught with gold bars concealed in the socks under his feet. “His walk was unusual, which was the first point of suspicion. The feet appearance was also abnormal and the size of the shoe heels had a difference. It’s tough for a normal person to identify this technique, but the customs sleuths who scanned every passenger with their bare eyes from top to bottom, intercepted him and nailed him.”

In cases related to smuggling of gold by concealing it in baggage etc, the officer monitoring the X-ray screen will be able to find this out based on the wavelength displayed on the screen, it can be identified and caught.