The torched Wagon-R in which the Tanzanian girl was travelling. (Photo: DC)

Bengaluru: A 21-year-old Tanzanian girl who is a second year BBA student of Acharya College had absolutely nothing to do with the car that ran over and killed a 35-year-old Hesaraghatta resident on Sunday night. Yet, while the local police stood by and watched, she was repeatedly beaten and then stripped of all her clothes and made to parade around naked.

Travelling in another car, a Wagon-R, along with four others, the young woman who arrived on the scene some 30 minutes later, was however still dragged out of the car after it was surrounded and stopped by the mob.

When a concerned bystander tried to cover her with a T-shirt, he too was beaten. When she attempted to board a bus and escape, the passengers of the bus threw her back into the arms of the mob.

The four others she was travelling with were also assaulted after the mob that was angered after a car driven by a Sudanese youth ran over and killed a local resident, waylaid the second car, which the local African Association, said arrived on the scene a full 30 minutes later and was not even remotely connected to Sunday’s Hesaraghatta accident.

“She’s Tanzanian, the man who caused the accident comes from Sudan, they didn’t even know each other,” said Bosco Kaweesi, Legal Adviser, All African Students Union in Bengaluru.

“The scared students were forced out of the car and then the car was set ablaze. The driver of the second car identified as Micah S Pundugu was beaten up black and blue by the mob who then stripped the girl student. When someone from the crowd offered her a T-Shirt to save her modesty, that man too was beaten up by the mob. She later, with her torn clothes, tried to enter a BMTC bus that had slowed down nearby, but the passengers in the bus pushed her back down on to the road,” Kaweesi told DC adding, “Micah recounted that people were streaming out from buses, auto-rickshaws and charging towards them, punching and kicking them.”

The Tanzanian girl went straight to the police station to register a complaint of assault but the unsympathetic cops refused to register the case, saying they would only take her complaint if she brought in the driver who ran over the 35 year old woman.

“When the girl did not even know about the accident or the spot where it happened, how can she bring in the driver of the car,” said Mr Bosco. 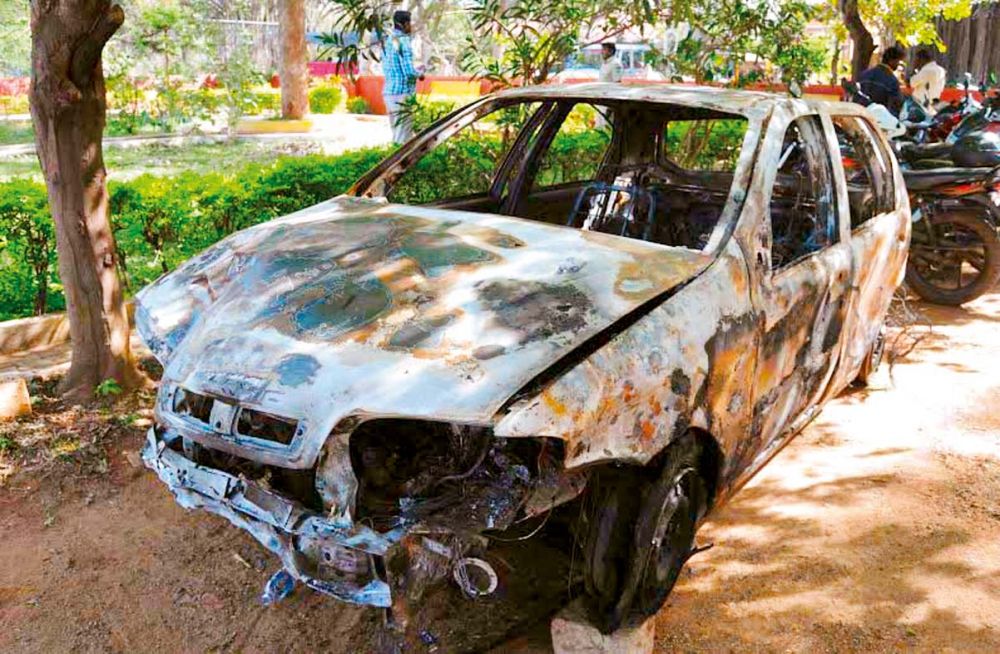 The car that was being driven by a Sudanese student that mowed down a woman in Hesaraghatta on Sunday night (Photo: DC)

“African embassies are shocked at Sunday’s incident in Hesaraghatta, where a mob chased and thrashed a Sudanese student and beat up four more Tanzanians. The Tanzanian Embassy on Monday sought a detailed report on the incident from student leaders to pursue the issue diplomatically,” Bosco Kaweesi, Legal Adviser, All African Students in Bengaluru told Deccan Chronicle.

The second car that was not involved in the accident was set on fire by the mob. Five Tanzanian students, including two girls, from Acharya College were in the car. Everyone was attacked. The mob stood in front of the car, preventing it from moving forward. They were beaten up, their dresses were torn and they were humiliated by the unruly mob for no fault of theirs.

The mob then set the car ablaze with all the students losing their valuable documents, like passports, ATM cards and cash. Injured students were sent out of the hospital because they could not pay the bills as their ATM cards were burnt, and they had no cash on their hands. They also could not contact their parents as their phones were robbed, Mr Bosco said.

“The local residents on Sunday night went hunting for houses where Africans stayed and harassed them. They stopped vehicles to check if there were any Africans inside. Our students heard that there were messages floating around that the locals were planning to attack Acharya College cottages and all the hostel accommodations in the area, which are full of Africans," he said.

“It was instigated by the local politicians, like it was done in the Byrathi Cross incident. The lives of African students will remain in danger until there is a collective meeting for reconciliation with the local residents, the police and the African community,” he said, adding that it worked well the last time in East Bengaluru.

“The entire African student community is still scared and reluctant to come out. Such incidents will have repercussions in Africa and innocent Indians who are in those countries will also face trouble from native Africans,” he warned.
The community alleged that the police were totally inept during the entire incident.

Fire breaks out at new Secretariat in Hyderabad