Chellur: Veenavanka Kiran and constable Parsuram were suspended for negligence in discharging their duties regarding the Veenavanka Dalit girl’s rape case on Tuesday.

SP D. Joel Davis said that orders were issued, suspending the two police officials for their callousness in discharging duties even after being informed by one of the victims who managed to escape from the trio.

It may be recalled that the SI, constable and inspector K. Srinivas had drawn flak from the parents of the victim for not responding to the panic phone call made by one of the victims. mobile phone after arriving at her residence on February 10. The police did not respond thinking that it was a casual call.

“My aunt saved me from committing suicide. I slit my hand with a razor after the sexual assault on me. I was devastated by the rape. To escape the trauma I went to my aunt’s house in Godavarikhani and tried to end my life there,” the 19-year-old girl said.

“I did not dare to tell my parents. So, I went to my relative’s place. I was not able to withstand the horrific assault on me. I visited a local church. My mind kept rewinding what happened. Unable to bear with the trauma, I wanted to end my life. But, my aunt saved me,” she told DC. 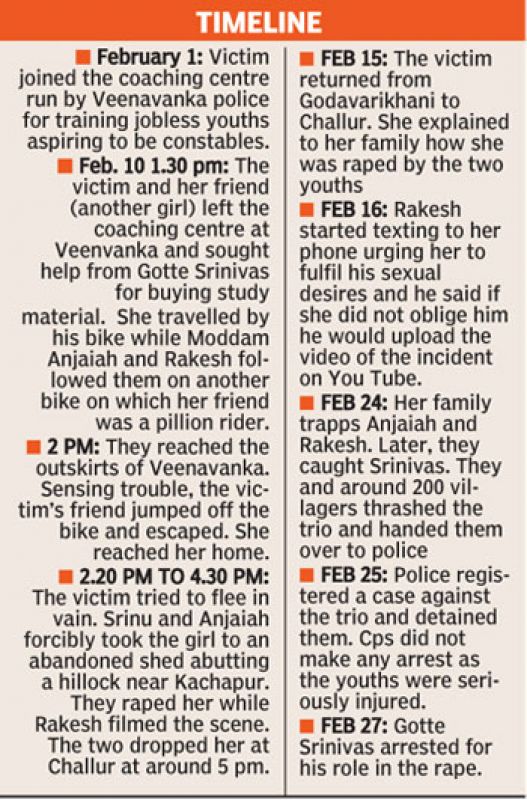 She said she discontinued B.Tech due to chronic headache after the incident. Her aunt however told her to go back to normal life. "She instilled confidence in me. Later, I could talk to my parents about the ordeal, with the help of my aunt.”

“I replied to the text messages sent by Rakesh, who filmed the rape. I did so as per the advice of my paternal uncle and cousins, who laid a trap to catch the youths who raped me and hand them over to the law.”

“The men who did this must be hanged immediately,” she said. She said she would like to join the police department if the government gave her an opportunity.

She alleged that Parushuram, a constable of Veenavanka, had advised the culprits not to attend classes as per the directions of his sub-inspector, who was informed about the sexual assault through her friend on the same day.

Why is CM mum: girl’s kin

“Why isn’t KCR saying anything about this incident? He became Chief Minister due to the students’ support for the Telangana movement. But he is silent when a hapless girl from a poor Dalit family was raped by three boys. Our dreams were shattered by this cruel attack on my daughter,” said the father of the Veenavanka gangrape victim.

The 50-year old labourer said he didn’t even own a piece of land but he was trying his best to provide education to his daughters. “We slept with empty stomachs. I sent her to the police coaching centre hoping someone would marry her if she got a government job. Now, I feel like ending my life,” he said.

The man said he occasionally earned some money by beating drums. “Who would marry my daughters if they know that one of my girls was raped? The perpetrators of this crime must be hanged. If they are alive, they will spoil the lives of many more girls,” he said.

Of his four girls, one is mentally retarded. The gangrape victim is his eldest daughter. His wife is a homemaker and suffers from back pain. The family is leading a difficult life in a one-room house given during TD rule years ago.
residence, admeasuring 20 sq. ft, granted through a housing scheme when Chandrababu Naidu was CM many years ago.

Nine detained in Gujarat for cutting birthday cake with sword