‘Why should boys have all the fun?’ was a tagline loved by girls, especially those who were passionate about riding. It has not been very long since women started riding two-wheelers in our country. Today, they are the most preferred mode of travel for many students and working women. However, even now, it is scooter that is supposed to ‘suit ladies’. Maybe it’s about breaking stereotypes and voicing equality, or simply the passion for riding, women do love riding motorbikes — the feel of wind on one’s face, the speed, and the thrill.

“I bought my first bike when I was 20 and got the label ‘bad’. But today, they say I am an inspiration. From a very young age, I was mad about the Bullet. My initiative Dauntless Royal Explorers, the first women’s Royal Enfield Bullet club in Kerala, is a big hit. We have 150 women on our team and I taught many girls how to ride a bike. We take trips and it is refreshing,” says Shyni Rajkumar, who claims to be the first-ever woman to have bought an Interstellar bike in the world and the first owner of the Himalayan Bullet in Kerala.

Even though more women are buying bikes now, the decision-makers are usually their families. They have this pre-conceived notion that bikes are too heavy for women, and could lead to accidents. “I sell bikes to 10 to 20 women in a year, in the age group 25-35. They are mostly working women or travel lovers, but even that’s a progress. It’s all about the mindset. There is no bike that a girl can’t ride.

In foreign countries and even in Indian cities like Bengaluru, women are leading bike riders, not just pillion riders. They hardly buy local bikes. Avenger, Bullet, Java, KTM, and Harley Davidson are their favourites. It’s high time we abandoned the notion that bikes are for men,” says Sreedev, salesman at KTM showroom. 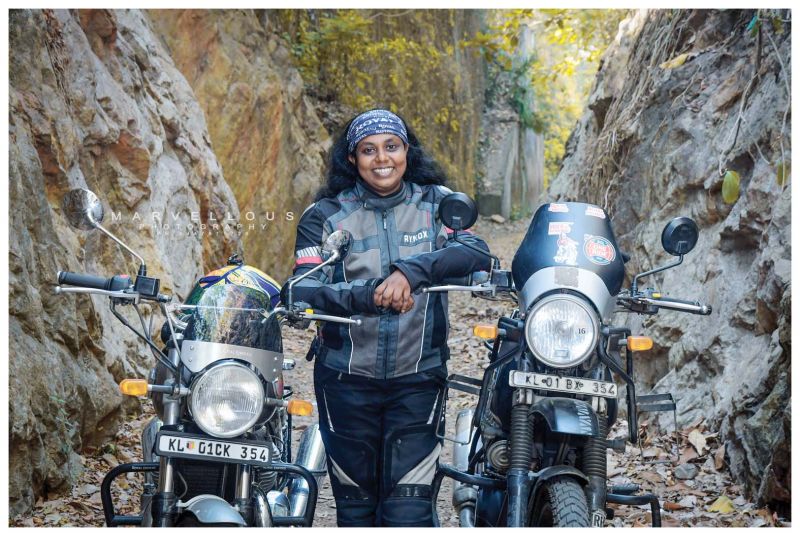 “When I first rode my Classic 350 Bullet, the neighbours were shocked. They even went to my father and said: ‘Are you bringing up your daughter to be a man?’ But he always supported me. It’s the mentality of people that has to be changed. The other day, I met with an accident. People gathered, but no one was ready to help. I even asked a man to lift my bike but he literally ignored me. It happened just last week. Even though Kerala has the highest literacy rate, people are not ready to let go of their biases and prejudices,” says Jincy, 21, a resident of Kanjiramkulam, who adds that bikes, open air, leather jackets, gloves, and sunglasses set her mood.

In many places, women riding bikes are constantly discouraged and mocked. Fathima, 21, talks about the gravity of the issue. “What ended in my marriage was my wish to ride a bike,”explaining, “A friend taught me how to ride a bike, but when my conservative family came to know about this, they thought I am on a bad track and may even elope. Soon, I was married off. But I was lucky to get a great guy. Last week, I rode my Thunderbird to Munnar with my husband. It seems normal today. I wear my burqa and kurti and ride even to small shops. People still look at me with surprise. The younger generation is more open-minded,” she says. Fathima prefers Thunderbird for the comfort, mileage and low seat height. “Women are into sports bikes and luxury bikes, too. It’s a slow change, but we are very far from Kinetic Honda. After all, kahani abhi baaki hai mere dost (The story is yet to finish, my friend),” she smiles.