Military photographs explain why photography is about capturing souls, not smiles. To capture the minute locus of each rescue operation, photojournalists struggle a lot along with the military officers who take part in the mission. Those images speak volumes on the extent to which soldiers go to fulfil their duties. A Military Photography Exhibition is organised under the aegis of the Press Club, Ernakulam, and the Southern Naval Command every year as a part of the Navy Week observance. The ninth edition of the exhibition is going on at Ruby Jubilee hall of the Press Club, and features 90 photographs associated with military operations across the country.

The cameraman of Reuters ,photojournalist Sivaram V. ,played a huge role in telling the world the magnitude of Kerala floods. His photograph of a 66-year-old woman, Indira, and her husband Appukuttan Nair being airlifted by the Indian Navy during a rescue operation at the severely-hit Chengannur still makes the same impact on the viewers’ minds. “It was my first such experience. I went along with the Navy and took photographs from a helicopter. The old couple was rescued and shifted to a camp near Chengannur, and later they were shifted to a hospital nearby since they were asthma patients. After the flood, I visited the couple. They were fine which made me happy,” says Sivaram. 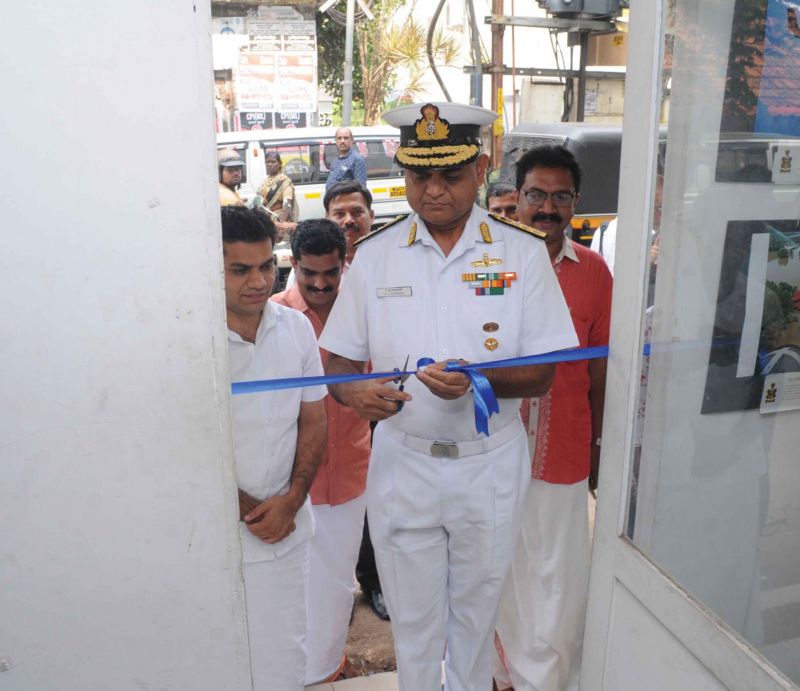 The exhibition being inaugurated by Rear Admiral R.J Nadkarni

Photojournalist Baiju Koduvally, who captured many moments of the rescue operations from the Navy helicopter, says, “Kerala had not witnessed a calamity of that magnitude. There was this family with a kid that was being rescued in a boat. On the way to the camp, the boat sank and the kid went missing in the water. When the parents were rescued, I saw their pain. They were not willing to get into another boat. At last, the kid was also rescued. The moment they saw their kid was a touching one which is still etched in my mind.” The photograph captured by photojournalist R.K. Sreejith which showed people being rescued in a Navy helicopter reflects their anxiety and fear. Another photograph that is displayed in the exhibition is that of  an Indian Navy Chief visiting a place where a military operation was carried out. Clicked by Photojournalist Nithin Krishnan, the photograph shows the officer standing in front of a destroyed house which was rebuilt with the help of the Navy. “We get harsh responses from people w
hile we capture some photographs, like the ones which were taken during the floods. They have no food or basic amenities; when we approach them to take a photograph, they get emotional and respond harshly,” says Nithin.

The photographs of a rescue operation in a flooded area in Kochi and NCC cadets offering flower petals in front of the war memorial in Bengaluru, as tributes to the martyrs of the Kargil war, are also displayed at the exhibition. There is also a photograph of the Indian Navy dropping relief materials to the flood-affected people at a relief camp.

The exhibition will be open for three days at the Press Club  between 10 am and 6 pm. The photographs will be displayed at Centre Square Mall, MG Road, for further public viewing from November 30 to December 2. The awards for the three best photographs will be presented by Vice Admiral A.K. Chawla, at Centre Square Mall on December 2. The first prize is Rs 15,000 along with a C-in-C crest and a certificate. `7,000 and `5000 will be given to the second and third prize winners, respectively, along with certificates. In addition to this, special jury awards will be given to two selected photographers.

The exhibition is a platform for photojournalists from different media houses across the country to showcase their skill in military photography. Each of the photographs reflects the touching moments during military events. The expo was inaugurated by Rear Admiral R.J. Nadkarni, VSM, Chief of Staff, Southern Naval Command, in the presence of Hibi Eden MLA, the other day.

Sex in the locked-down city