A tale of two legacies

As a tribute to Mahatma Gandhi, who’s credited with the revival of India’s Khadi industry, and Raja Ravi Varma, considered among the greatest painters in the world, Hyderabad-based textile designer Gaurang Shah is all set to present more than 30 saris in khadi at Santati, the exhibition being held at Mumbai’s National Gallery of Modern Art (NGMA) on October 1. Incidentally, the pallu of each khadi sari that Guarang has on display bears woven replicas of paintings by Raja Ravi Varma

Paying tribute
Elaborating on the project and how everything fell into place, Gaurang Shah says, “Back in 2016, I’d recreated six paintings of Laxman Aelay on saris using the jamdani technique. One customer, Lavina Baldota from Baldota (Abheraj) Foundation, had liked my creation and proposed to collaborate with me in the future on a unique and much grander project, bringing together two art forms in beautiful, inspiring synergy. In 2017, Lavina introduced me to the Raja Ravi Varma Heritage Foundation with the idea of recreating Ravi Varma’s works on khadi saris. It was aimed at being a combined reverence to the artist and Mahatma Gandhi who had transformed the use of khadi.” 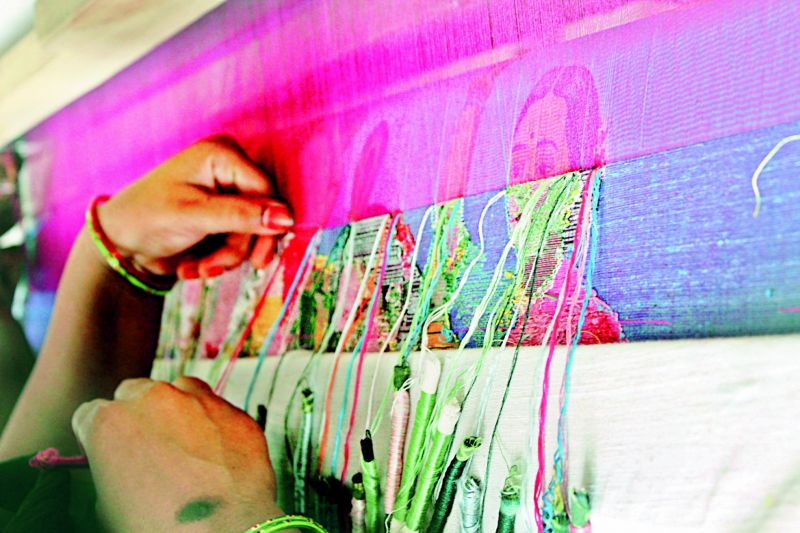 The project took over two years and included a precise replication of Raja Ravi Varma’s unseen paintings, which were then woven on to the pallu of the saris using the Srikakulam jamdani technique. “But what excited me even more was to discover that Gandhiji’s birth anniversary and Raja Varma’s death anniversary coincided — a connection that led us to announce Santati,” he further shares.

Both the project and exhibition, which Gaurang calls a tribute to our handloom and jamdani weave tradition, also seemed like a divine connection. “I believe I am connected to Gandhiji by the love for khadi that he had, too. And adding to the fabric Raja Ravi Varma’s paintings, which often showed women in drapes and saris, was equally exciting. I think it’s a perfect way to promote and show the beauty of our weaves and their versatility,” he says.

Gaurang then tells us about how the paintings were chosen as well as the creative process behind it. “We fundamentally aimed at choosing lesser-known paintings and shortlisted 54 oleographs. The paintings chosen were from three categories — women in Raja Ravi Varma paintings, gods, and goddesses and stories,” explains Gaurang. Unsurprisingly, the designer’s team took over six months to research. Then, they began creating 600 shades of colours. “We had to do everything with natural dyes to replicate the paintings in khadi and to recreate the same colours as on the portraits. We dyed over 200 kg of yarn in the process. Our choice of using Srikakulam jamdani, recreating the intricate paintings on the pallus took three months for some saris and over 10 months for others,” shares Gaurang.