Laxmi Narayan’s idol of the year — the blinking Ganesha.

Every Ganesh Chaturthi is an opportunity for idol makers to showcase their innovative designs and new artwork, and with the festival fast approaching, the artists in Telangana have already accelerated the process.

One such idol maker from Dhoolpet, kalakar Laxmi Narayan Singh Lodhi, is making a Ganesh idol that blinks! Laxmi Narayan is no novice in the field. He has been making the Balapur Ganesh since 1992, apart from the famous Aakashpuri Hanuman which stands 51 feet tall. Among his other famous idols are those of Lord Shri Ram for Sri Ram Navami Shobha Yatra, Mallana and Bharat Mata, which was also a blinking idol. This is however the first time that he has made an idol of Lord Ganesh which blinks.

Laxmi Narayan, who has been making idols since 1980, shares that his dad, an idol maker himself, was his biggest inspiration. “I started making idols after I completed my tenth standard,” says the artisan, adding, “I saw my dad making idols every day with a lot of concentration and hard work. Customer satisfaction was all that mattered to him and his motto is now mine as well.” 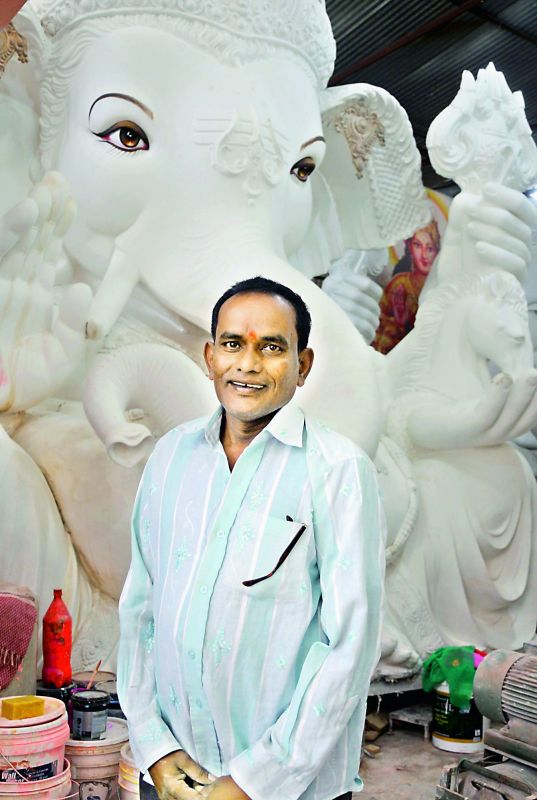 The artisan believes that people of all age groups should like and appreciate his idols, and is keen to try something new each year. Interestingly, his idols are being ordered from various places like Kurnool, Nizamabad, Karimnagar and Kamareddy among several others.

The biggest challenge that the idol maker faced was to understand the technical aspects of the craft. He, along with his four brothers and their helpers have been in this business together from the start, and have worked hard to understand the technical aspects on their own. “After struggling for three months, we made this Ganesh idol which everyone liked. Surprisingly, we have received an order to make another 30 such idols that blink,” he shares.

Laxmi Narayan is also known for his Bharat Mata idol.

The one thing Laxmi Narayan does regret however is the fact that the kalakars are not given the respect that they deserve. He shares, “People should understand that we work hard on every idol we make. It requires a lot of hard work, but we don’t always get appreciation for it. Kalakar ko sammaan milna wohi sabse badh ke hai hamare liye (As an artist, respect is everything for us).”
He concludes by saying, “In terms of money too, we get very less compared to the hard work that we do, but it’s still okay. If my customers are happy, so am I.”