A big ‘HUG’ for those who really need it

The city witnessed floods on August 14, which wreaked havoc at different slum pockets in the city, leaving the residents looking for food and clothes.

Bengaluru: During the horrific Chennai floods, all it took was a few like-minded people to start sending messages and opening a Facebook group, requesting people to contribute toiletries, dry food, dry clothes, mats and other necessities. What the team expected was to just send a truckload of items to Chennai flood victims, but it grew into something bigger and finally, five to six truckloads were dispatched to Chennai. The immense support received made Madhumita Kalauny start a humane movement by reaching out to like-minded to people to help the needy, and it led to H.U.G – Humane Universal Good Deed Network. She registered it as an NGO only recently, but the work to help and bring smiles on many faces began two-and-half years ago.

“Whenever there is a calamity or sudden event throwing the normal routine out of gear for the needy, we try to help by connecting to various wellwishers and mobilising freshly cooked meals or other items needed,” says Mr Ajith Anirudhan, an active member of HUG.

The city witnessed floods on August 14, which wreaked havoc at different slum pockets in the city, leaving the residents looking for food and clothes. 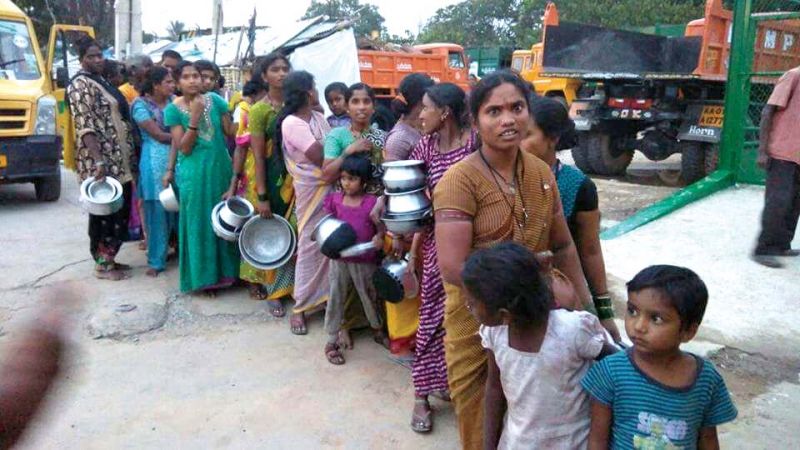 “During the recent floods, we raised 200 freshly cooked hot meals for three days for the slum dwellers at NGV in Koramangala. People there did not even have dry clothes and we managed to facilitate that as well. All through, we reached out through simple SMS and other social media platforms. It was extremely nice to see people willing to help and coming forward to lend a hand whichever way possible,”says Anirudh.

Another heart-warming incident was when volunteers of HUG tried to facilitate rice and rasam for the displaced people of Ambedkar Nagar in Bellandur and distributed food at 10 in the night.

To reach out to more people, the team has started a GiftaMeal programme, where people can feed someone every day by contributing just `30 for a hot meal every time they eat out or by using the PAYTM code.

“Under the programme, we are feeding 300 people every day and the numbers are growing every day as people do have this desire to help. It's just that they don't know whom to reach out and who is genuine. The GiftaMeal initiative has been providing mid-morning meals to the destitute at L.R. Nagar, D.J. Halli and Tannery Road and other slum pockets in the city,” he says.

“Luckily, since the Chennai flood programme, we have seen that each Facebook post that we share asking for help and other items goes viral and people share it across platforms. That is the power of social media and that is the power of kindness,” he adds.

Under the GiftaMeal programme, they have opened satellite kitchens across the city, and also many restaurants and hotels have partnered with them to cook fresh meals for that amount.