Winning over with words

DECCAN CHRONICLE. | PRIYA SREEKUMAR
Published Dec 27, 2017, 12:00 am IST
Updated Dec 27, 2017, 6:43 am IST
Differently-abled Anish has overcome great obstacles in life and these experiences help him in motivating others.

His dream is to inspire 10 million people and make Kerala a disability-friendly state. Well, the 10 million does seem like a lofty figure but if anyone has the drive to reach that magical figure, it would be Anish Mohan. Incidentally, Anish, as a motivational speaker, has already conducted 1,200 training sessions, addressed over 2 lakh people and has an international training experience. He remembers the turning point when after one of his talks, an audience member met him and revealed that Anish had just talked him out of committing suicide. Then Anish realised that his words had the ability to touch and change lives. Anish loved giving pep talks as a child and had wanted to be a motivational speaker but had acute stage fright, which put paid to that avenue. Well, destiny has a way of putting dreams into perspective when the right time arrives.

For Anish, it was a tragic turn of events that had him rising from the ashes like the proverbial Phoenix bird and taking control of his life along with his dreams. Seeing a confident, well-dressed Anish on stage, giving pep talks to students and senior officers, one does not realize that he is differently abled. He is the National Co-coordinator & Trainer for Institute for Person Centered Approaches in India. Anish's childhood was a difficult one, besieged with financial woes, he admits his memories of those early years were painful. His father was a daily wages worker and his mother worked in a mill. So along with studies, he started doing small jobs to earn money. 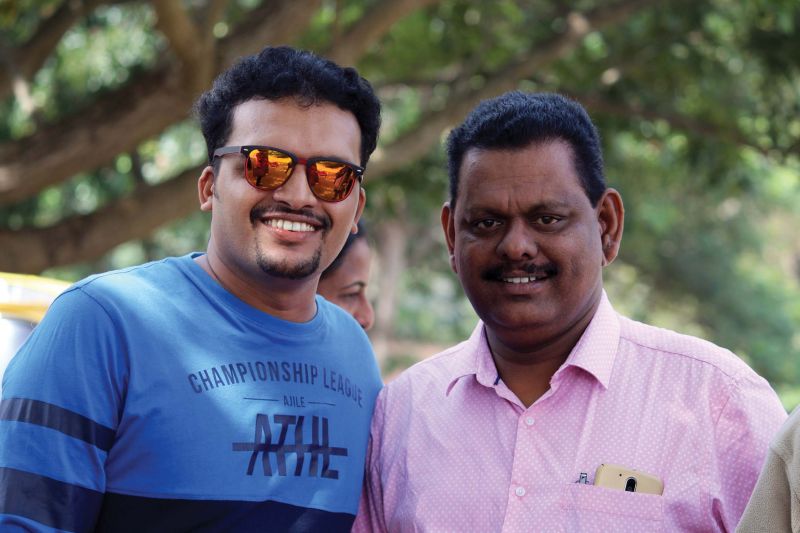 “The first job I took up was at the mill my mother worked in when I was in class VII. That was just the beginning of the odd jobs I did - painting, making tea in a wayside stall, carpentry, playing the chenda, etc.  Life was hard but through all these hardships what kept my spirits up were the inspiring words a teacher told me - 'that if you suffer a lot during your childhood days , you will be rewarded later on in life'. Those words inspired me and from the money earned through these jobs, I joined an instrumentation course and secured the 4th rank.”

“The secure future I wanted was within my reach, including a job offer,” he says, adding, “Now, looking back, I realise the hard days were preparing me for the biggest challenge of my life.”  Anish's life, as he knew it, changed on the night of October 17, 2009. On the fateful day, Anish crossed a railway track in Thiruvananthapuram in a hurry to catch the last bus home to Kottayam. That simple act of crossing the track was the beginning of his nightmare. Anish tripped and fell, hit his head on the tracks and lost consciousness. The next moment, a train bore down on him, passing over him and his right hand (above the elbow) and left leg (below the knee) got severed. When he regained consciousness, he was in hospital. His hand was reattached but what he could not get back were his dreams - of a job in instrumentation and of playing the chenda. Financial difficulties compounded the entire scenario because artificial limbs were beyond reach for Anish at that point of time. His day-to-day routine needed constant assistance and he went through emotional downs.

All those difficulties and pain were just setting a stage for the fighter in Anish to take centrestage. He remembers, “I was a person who had a negative approach to life but the accident opened my eyes and made me see the positives in life. The policy I adapted was that every 'no' was an opportunity to make it a 'yes'! That became my mantra and every incident after my accident was proof of that. The doctors gave their verdict that I would not walk, but I walked. A job was essential and I knocked on a lot of doors, hoping my qualification would carry me through. But I was rejected by interview boards. I restarted my studies in PSC coaching. I also took classes and realised that there was a trainer in me. That gave me an opportunity to turn to training as a career option.”

Incidentally, he was denied a four-wheeler driving licence but he fought a year- long battle to get his licence and also drives a motorcycle now. He visited the holy shrine of Sabarimala, climbing the steps - yet another milestone for him. Meanwhile, Anish secured a government job five months ago and is working as a clerk. He continues with his motivational classes on holidays and off days. He says, “I get motivated when I help others to grow.”

The list of people who inspired him is countless but those who come to mind are his parents, his professor Mathew Kanamala and his colleagues. Social work is something close to his heart and he is pursuing his Master of Social Work course and wants to earn a doctorate in the same.  Like any other youngster of his age, a family of his own is a dream he is currently seeing and he hopes to find an understanding life partner soon. Anish says, “Even now, life is a struggle and I do not get everything that I want but in each struggle, I see an opportunity to reach even higher. I tell everyone to overcome struggles to find the pot of gold at the end of the rainbow.”