A mermaid in Chennai

With the Bay of Bengal lapping it, Chennai is no stranger to marine life. But even though the sea and all its wonders have long been part of the city's economy as well as entertainment, a mermaid is still a magical sight! And that’s the latest addition to the VGP Group’s Aquarium, which opened earlier this year.

An entertaining yet educative Mermaid Show at Marine Kingdom is performed by Celine, an internationally-renowned artiste from Belgium. “As a kid I watched the Little Mermaid movie numerous times and always wanted to be a mermaid. Growing up, I wanted to be an actor who could also dance. I am a water-baby and love swimming. I trained in scuba diving and that brought me closer to being a mermaid”, she chuckles 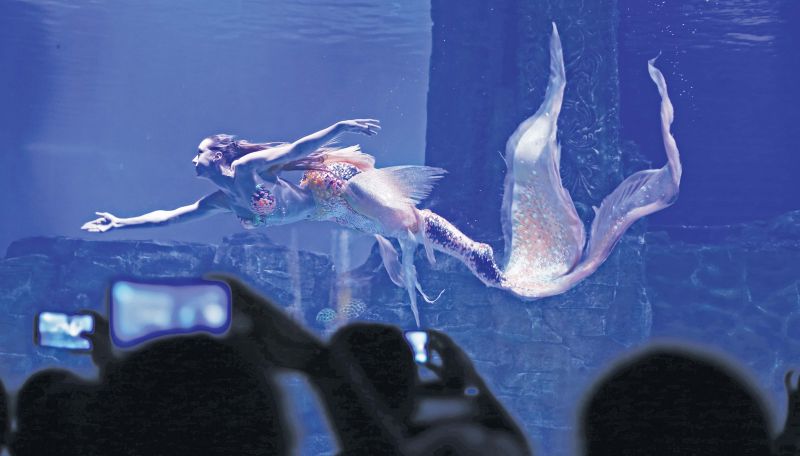 In her show,  Mermaid Celine, as she likes being called, focuses on pollution, its adverse effects on marine life, and how to prevent it.

“My mum and I are creative and have made all eight of my costumes. Each costume takes about four months to complete”, she says.

Marine Kingdom has about 150 species of marine and freshwater fish spread over 25 tanks. The facility also has a 70-metre tunnel that people can walk through and enjoy the sight of marine life swimming around them. There is a banquet hall which can accommodate around 200 people, overlooking a part of the aquarium.

Artisans from Indonesia specialising in aquariums were hired to create the natural-looking ambience at Marine Kingdom. VGP Ravidas, Managing Director of the VGP Group, says “all the installations are made out of cement. Food-grade paints have been used, which are safe for the fish and yet give the required effect - in this case an ocean base effect.”

After the Marina Aquarium run by the State Fisheries Department was destroyed by the 2004 Tsunami, Marine Kingdom is a welcome recreation location in the city. The facility is adjacent to the Group’s Theme Park on the ECR. The Mermaid Shows are on from December 21st till January 1st 2020. There are four shows per day and a special “meet and greet” session with kids and adults at 10:45 am and 5:45 pm as well.