‘Are not poverty and need the greatest polluters?’

2017 marks the birth centenary of former PM Indira Gandhi, whose fiery regime has been prolifically extolled and denounced in equal measure, having rattling the very foundations of Indian democracy. On June 25, 1975, exactly 42 years today, she declared an Emergency, suspending elections and allowing civil liberties to be severely curbed. The press was heavily censored and several of her political opponents were imprisoned.

Amidst this surfeit of literary opinion, it is former Environment Minister Jairam Ramesh's most recent work, Indira Gandhi: A Life in Nature, that stands out most of all. Moving away from mainstream polemic, Ramesh unveils a side to Mrs Gandhi that very few people knew existed: the avid, far-sighted environmentalist. Indira Gandhi: A Life in Nature, is an unusual biography and its author, Jairam Ramesh, who readily acknowledges this, is also the first to ask the most pressing question: "Why focus on Indira Gandhi's life as a naturalist when she was quintessentially a politician?" He addresses straight off, in the first chapter, where he writes, "A naturalist is who Indira Gandhi really was, who she thought she was. She got sucked into the whirlpool of politics but the real Indira Gandhi was the person who loved the mountains, cared deeply for wildlife, was passionate about birds, stones, trees and forests and was worried deeply about the environmental consequences of urbanisation and industrialisation." It is a side to her, he points out, in an interview with DC, "That is little known and little appreciated," having played a crucial role in shaping her political agenda.

The 70s were a dark time for India, with widespread poverty and mass disquietude. The government, headed by Indira Gandhi, buckled under a litany of financial and political woes. It was in the midst of these troubled times that Indira Gandhi took the podium in Stockholm, for the 1972 United Nations Conference on Human Environment. Early stirrings on environmental discourse had just begun across the globe, thanks in large part to Rachel Carson’s Silent Spring, which took the world by storm in 1972. Still, the discourse remained largely confined to scholarly circles. The year 1972, therefore, marked a turning point for the global development agenda and it was at this time that Indira Gandhi delivered her widely celebrated fateful speech. "It shaped India's thinking - as indeed of all developing countries - in the global environmental debate," Ramesh remarks. "India faces both a development imperative and the challenge to protect and preserve the environment." Conservation and development constantly find themselves at odds with each other, a conundrum that Mrs. Gandhi foresaw and even addressed in her famed speech.

The statement, "Are not poverty and need the greatest polluters," has been subject to a wealth of (mis)interpretation, merits special attention in Ramesh’s book, for he points out, "We have to strike a balance between growth and conservation. It cannot be growth at all costs. Blind worship of high GDP growth is not in our long-term interest. It certainly cannot be at the cost of ecological security. Indira Gandhi showed that middle path is not just desirable but also feasible."

The world was captivated with her refined rhetoric, as she quoted the sages of the Atharva Veda and referenced the policies of King Ashoka in 500 BC, to unravel the role that environmental conservation has played in the nation's history. And it didn't end there. She was personally responsible, says Ramesh, for "the four laws that continue to guide us today on wildlife protection, control of water and air pollution and forest conservation." To do this, she created the Central Pollution Control Board as well as affiliated branches in different states. "And, of course, she created the Ministry of Environment and was its first Minister from 1980 to 1984," he points out. "Whatever she did and spoke about in the 1970s and early 1980s, from deforestation to climate change, have tremendous relevance today." 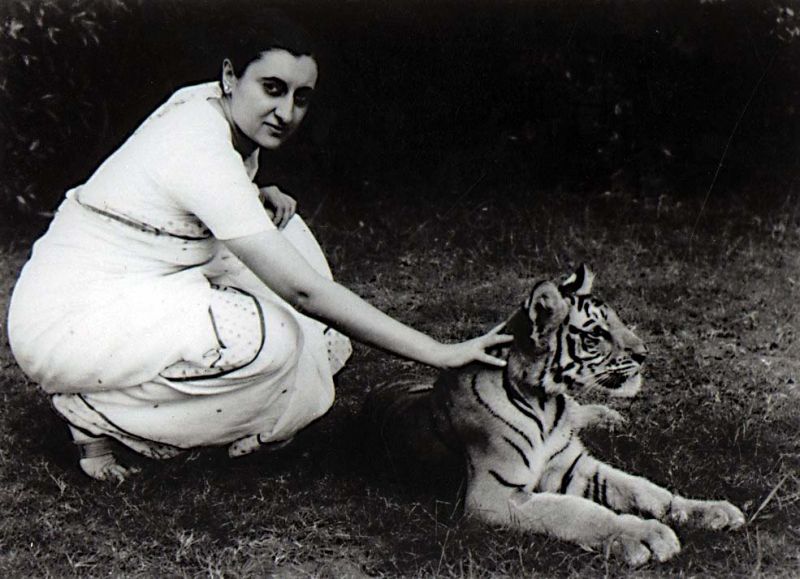 Indira Gandhi playing with a tiger

How would you describe India's potential for alternative sources of energy. Are we doing enough? Solar energy is one of the NDA government's most touted schemes... Solar prices have come crashing down in the past few years and the government has taken advantage of it. That is as it should be. I have in my book included a letter from Indira Gandhi to JRD Tata in 1976 calling for greater focus on solar energy. She then started a national solar programme in the early 1980s but it is only now that solar prices have come crashing down. But concern for the environment views well beyond having an aggressive solar programme essential as that is in its own right.

Even the debate on cow slaughter, which has caused serious infringements on personal liberties in the recent past, began during the Indira Gandhi regime. What was her stand? The first assault on Parliament by cow protection activists mobilised by the RSS took place in November 1966?. Police firing took place. Some people were killed. The Home Minister resigned. Some months later Indira Gandhi set up a high-powered committee to examine the issue of a national ban on cow slaughter. This committee included the head of the RSS M.S. Golwalkar. The committee deliberated for twelve years before it was wound up in 1979 without submitting its report.

Mrs Gandhi went on to plead that a higher standard of living for the impoverished people of the earth be achieved without alienating from their heritage, “without despoiling nature of its beauty, freshness and purity so essential to our lives”. And she sought to assure those same people that a regard for ecology would not work against their interests but, on the contrary, would enrich their lives.

Excerpt from Indira Gandhi: A  Life in Nature