One hotel in Switzerland has even issued a notice directed to its Indian guests, calling for basic etiquette.

There is no way to sugarcoat this: Indian tourists are, more often than not, considered a menace when they visit international destinations. Especially now, when the country is witnessing a steady increase in travellers to countries far and wide, it is a cause for great concern that hotels, restaurants, airlines and the like are being forced to address poor Indian tourist behaviour. This ‘singling out’ may sound revolting — particularly to those who always maintain decorum — but, as it turns out, it originates from necessity.

Harsh Goenka, Chairman, RPG Enterprises, and an avid traveller, was staying at a luxurious hotel in a town in Switzerland, when he received a notice addressed to ‘Guests from India’. It listed rules that are usually considered a part of hotel etiquette, but barely ever put on paper — ‘Please do not take anything with you (from the buffet)’, ‘Only use the cutlery provided’ and ‘we ask you to be quiet in the corridor’, being just a few of them. The notice immediately brings to mind that Indians often end up being noisy, entitled and disrespectful to other people’s culture when they travel abroad, and, therefore, subject to hostility from others.

Frequent travellers cannot seem to agree any more. Take, for instance, Shrishti Mathew, a student studying in New York City, USA, who keeps on shunting between Chennai and her university. The problem, she says, begins right from the first inbound flight, “This man sitting next to me kept on drinking beer after beer uptill 4am,  much to the annoyance of the cabin crew. Indians don’t know when to stop when they gain access to something for free.”

Archana Singh, who has travelled to over 60 countries, agrees wholeheartedly. “The poor cabin crew is always fretting when it comes to operating from India.” She continues, “They (passengers) want to use the washrooms before take-off. They drink too much, they have so many questions, they have many specific demands, like special meals, they keep pressing the bell…the list is endless” 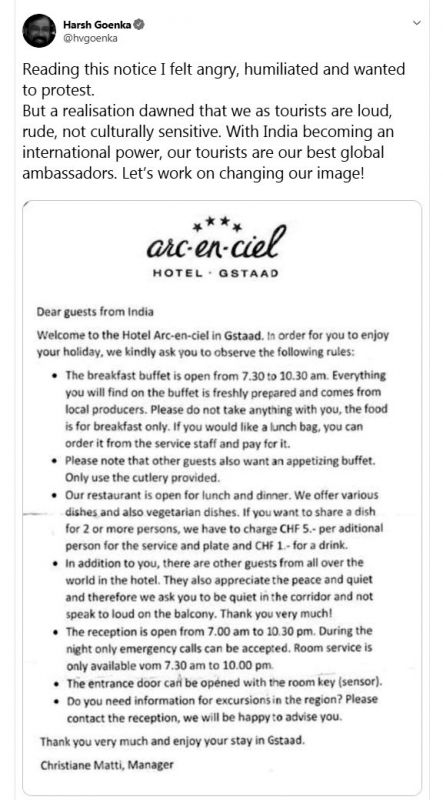 Unfortunately, the situation is no better once Indians reach their destinations. Another Twitter user, Gabbbar, posted a photograph of a notice advertising an Indian buffet in Switzerland. The meal was being charged by weight, a practise than began after, he claims, a couple from Gujarat were caught stealing food from the spread. Archana continues, “In hotels we over-demand.

Hot water, mineral water, this and that…We wake up late, then when we miss breakfast and then we create a scene. And, then, we’re super loud. Even if there's another family in a restaurant, our voices end up being far louder than theirs.” Karan, who travels internationally for work, was faced with a similar issue while on a bus trip to Klaipeda in Lithuania. He felt quite embarrassed at a fellow Indian who was annoying the other passengers by talking too loudly. Luckily, an intent, hard stare from Karan was enough to calm the perpetrator down.

Things aren’t always that easy to deal with, however. Lasya Nadimpally had a beautiful experiencing backpacking across Cambodia a few months ago, except for that one time, she says, “When I met this single Indian guy in my hostel, who made me stay up to have a conversation with him, which I did out of politeness. I had some white friends over the next day and he started acting weird…I noticed he tried really hard striking up conversations with the uninterested group.” Indeed, the problem of Indian men “Travelling and trying to get pally with white women in the hopes of getting some action,” as Lasya says, is also a prevalent one.

However, despite all the negative attention, travellers also point out a flipside to the argument. For instance, Archana considers Chinese tourists to be as bad as Indians. Aditi Kumar, whose spends her time shunting between Oman and Los Angeles, USA, brings cultural differences in the equation. She says, “This is why Indians are singled out. We don’t understand basic rules like buffet is not meant to be shared.