Wells of hope wait to spring back to life

Ancient Shambhulinga temple with an inscription

Water and a plateful of food, no one knows their worth better than the villager fighting a perpetual battle with the vagaries of nature in little villages spread across the country. And when the village well goes dry and the paddy fields dry up, the light goes out of the sunburnt villager’s eyes and there is only desperation and grief to live on till hope arrives in the form of a government scheme or something like a loan waiver. Voices for protections of lakes and ponds are therefore getting louder and louder with the depletion of the underground water table due to rapid urbanisation. Our wells have disappeared over the years with excessive drilling of borewells leading to over exploitation of the water table. Water recharge and various methods of conservation have failed to get due attention in North Karnataka though the region is prone to drought every year owing to the failure of the monsoon. But, 101 wells and 101 shrines with different styles of architecture in the small village of Hebballi near Dharwad have survived the vagaries of time. Historians claim that it is the only village in the state which has so many wells and temples. Several people in the village are now fighting a battle to revive them as these wells and temples stand mute testimony to the enchanting history of the eleventh century and the traditional lifestyle of a bygone era. Vittal Shastri profiles the struggle of these villagers to revive their ancient treasure which has stood by them in times good and bad.

Eighty-eight year old former wrestler Nabisab Savanur fondly recollects his memories of a hale and healthy generation who lived just three decades ago in Hebballi village situated 14 km away from the district headquarters, Dharwad. Both men and women used to work hard throughout the day to lift water from 40-50 feet deep wells which were the main sources of water for them and their cattle. Farm ponds existed in every agricultural plot during those days. Everyone used to build water tanks to store rainwater as agriculture was the primary occupation of these villagers. Four vast lakes in the outskirts of the village helped recharge the ground water ensuring abundant water in all these wells.  But then tragedy struck, the Gram Panchayat sunk 35-40 borewells in the last few decades, causing depletion of groundwater due to its over-exploitation after recurring droughts.

The people of Hebballi, who used to supply water to surrounding villages, now had to trek long distances during summer to get a pot of water. Many of the centuries-old wells were ruined or went dry as the villagers had neglected them after implementation of the multi-village drinking water project which was dependent on the Malaprabha reservoir.  The village, which has around ten thousand people, was even the centre of attraction just a few years ago as tourists used to visit the place to get a glimpse of these wells. “There is apprehension among villagers now about the consequences if the supply of dam water is stopped in the future. Therefore, we are planning to rejuvenate these wells to restore their lost glory as many of these have become garbage bins. We are creating awareness among the villagers about the need to revive these lakes for our future generations”, said sixty-one year old priest Prakash Morab.

Historians claim that this is an ancient village known as Brahmapuri which was ruled by the Yadav kings in the 11th century. Several inscriptions found in Hebballi depict its historical facts. The village was spread across several kilometers upto Dharwad and had 13 entrance gates (forts) with gigantic protective wall surrounding it. The rulers had grown toxic plants which were spread like cobwebs on the walls to ward off attacks by enemies. The rulers had also bred poisonous snakes on the walls to chase away invaders!

More than 800 Brahmin Purohits and 300 political pandits had lived in the village to guide the rulers. Historians believe that these Brahmins used to follow strict rules in their day-to-day pooja and other religious practices as per Hindu religion. Therefore, every Brahmin family had constructed their own wells in front of their house for utilising pure water for the rituals. The practice of untouchability was very high during those days as lower caste people were never allowed to touch the water from these wells built by the Brahmins.  The village naturally had more than hundred temples as the upper caste Brahmins used to maintain purity in all rituals by constructing their own wells and shrines.

The then rulers had made these Brahmins Jagirs by allotting them thousands of acres of farm land. Just a few decades ago, a few Jagirdars had lived like big landlords and the rest of the villagers used to work as agricultural labourers. But, they lost their land after the introduction of the Land Ceiling Act. Due to this, the Brahmins deserted the village after obtaining jobs and many of them migrated to the towns to engage in business activities. Several people from lower castes however continued to serve as priests of the temple built by the Brahmins and began to utilise the water from these wells for themselves. Later, the dominant weaver’s community began to use the water from these wells for their occupation.

“Many wells built in the village have 2-3 pulleys to lift water. A separate pulley used to be allotted to the lower castes to prevent water and pots used by Brahmins from becoming ‘impure’. Now, the practice of untouchability has almost been eradicated as all people have been living in harmony”, said villager Krishna Nadiger who has done his post-graduation in ancient history and written a thesis about it.  These wells were also the main source of water supply for wrestlers who had earned themselves laurels in neighbouring Maharashtra. More than forty wrestlers from the village had become popular in the region for showcasing their talent in rural sports activities that used to draw huge crowds from surrounding villages. They used to take bath in these wells after practicing wrestling every day. 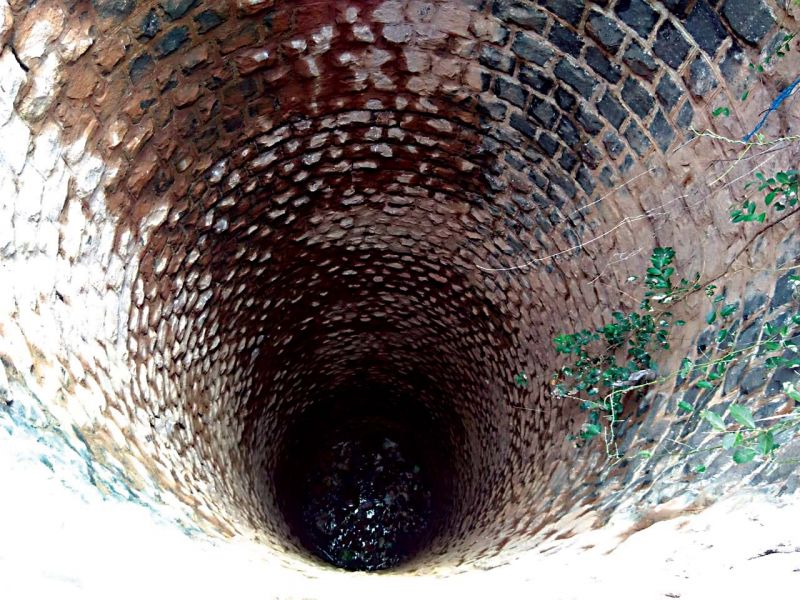 Several beautiful temples, eight maths and two mosques are also situated in this tiny village. The villagers claim that some of these temples were built by the great sculptor Jakanachari of the 12th century during the Hoysala Empire period. Shambhulinga, Muga Basaveshwar, Chandala Parameshwari and Kanakambari and Panchamukhi Hanuman are prominent among these temples which are tourist attractions. Several inscriptions discovered in the village are preserved in Karnataka University. These inscriptions show that prominent saint poets, philosophers and social reformers including Santa Shishunala Sharif, his guru Govind Bhat, Sri Siddarudha Swamiji, Brahma Chaitanya Maharaj had visited the village.

“Hebballi village, which was known as Brahmapuri, had a vast market yard spread over 77 acres. It is said that a big fair was conducted every fortnight and a large number of people from surrounding villages used to throng the village for business activities as people had lived in prosperity due to the good monsoon. Now, the drought haunts us almost every year due to scanty rainfall. Exploitation of ground water owing to rampant drilling of borewells has led to an adverse affect on  the farming community”, said government  primary school teacher Lakkappa Lakkammanavar.

When technology runs into obstacles impossible to overcome, it`s time to delve into our ancient wisdom for precious nuggets which can help us come up with solutions which modern generations may perhaps never think of. In Hebballi, a massive effort is on to revive the wellsprings of hope after tech driven irrigation methods left the water table at levels impossible to reach. As history has proved more than once, the solutions for all our problems have always been there and have either disappeared into the obscurity of time or are waiting for a greater effort from us to unveil them. Hebballi could perhaps prove that the answer to great problems like drought and water scarcity lies in simple answers-like merely reviving our ancient wells.