Over 117 elephants will be part of the Thrissur Pooram that will be held on Wednesday.

Elephants hold a special place in festivals, particularly in Thrissur Pooram, where more than a hundred captive elephants are paraded each year. The 36-hour-long festival is marked by colourful fireworks, percussion and parading of caparisoned elephants along Thrissur town. Though the Thiruvambady and Paramekkavu devaswom boards have informed that they will ensure proper safety measures and provide enough amenities for the elephants, the concern over its execution poses a question mark.

“For the last few years, with the help of NGOs and cooperative groups, the devaswom boards have been providing the jumbo watermelons, palm leaves, drinking water and wet sacks to bring down the soaring temperature. But the timing of most rituals is between 10 am and 6 pm during which the elephants have to stand under the scorching sun. Also, they get ill-treated by the mahout during the parades,” says Venkitachalam of Heritage Animal Task Force, an animal rights group which has been campaigning against keeping elephants in captivity and parading them. 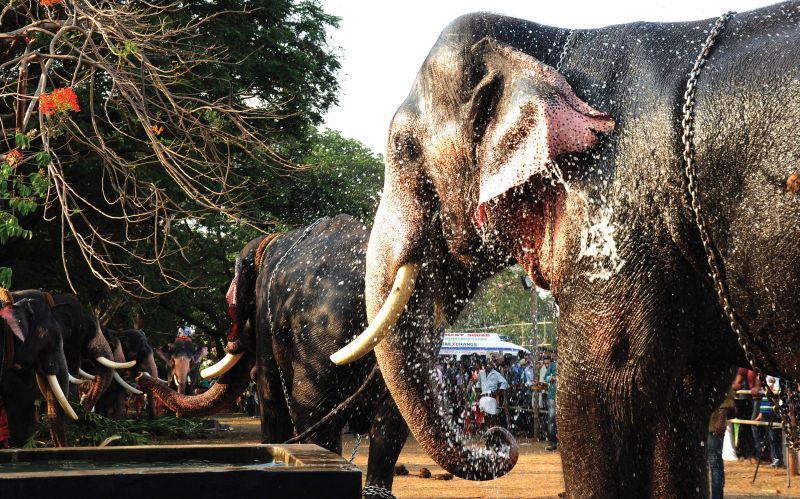 Elephants hold a special place in festivals, particularly in Thrissur Pooram, where more than a hundred captive elephants are paraded each year.

“Caparisoned elephants belonging to the two leading temples, Thiruvambady and Paramekkavu, stand carrying at least four persons from 11 am till 9 pm. Other elephants from the smaller temples which are part of cherupooram would be made to stand from 11 am to 2 pm. Again, another batch of elephants would be paraded from night to early morning,” he adds. Activists have been pleading with the authorities to limit the timing of parading these jumbos.

Since the last pooram, out of more than a 100 regular participating elephants, 16 had died. “In 2008, the number of elephants in the state was 617. After 10 years, it has gone down to 404. Most of these elephants were taken to festivals across the state. The way the mahouts and devaswoms treat the animals is one of the main reason behind their death. Though a committee headed by the district collector is there to select the elephants for each year’s pooram, weak elephants have been part of it, with or without the authority’s knowledge,” he adds.

Last week, during the Commonwealth Heads of Government Meeting 2018 in London, British activists and animal lovers had requested Prime Minister Narendra Modi to end the torture against elephants in India, especially in Kerala.

Even though both  Thiruvambady and Paramekkavu Devaswoms in a recent press meet, have informed  that verything needfull including veterinarians at every temple festival venue will be provided, there were doubts regarding the selection and medical check-ups of elephants, says Venkitachalam. “The devaswom authorities have to ensure the health of each elephant in a certain way that is recommended by experts. But mahouts and their agents would find a way to trick them. This year too, the situation was no different,” he adds. Over 117 elephants will be part of the Thrissur Pooram that will be held on Wednesday.