Little did people think that tricks with a football could bring anything more than few likes and shares on Facebook. Not many even know that such tricks fall under a category called freestyle football, and it’s a pretty serious deal. Two lads from Chennai have made people turn their heads by setting Guinness records!

Ramesh, 27, made 284 consecutive football touches on his knees under a minute, while Raja, 21, made 117 eye-to-eye rolls with a football in a minute. The previous records were 250 and 98 respectively. Talking to DC, this officially amazing duo share their journey, their love for the sport, and how they still struggle for recognition.

Pradeep has his own academy where he trains youngsters in freestyle football. He says, “I was into football when I was in school and it continued throughout college as well, but midway, I understood that it would not be financially viable, because it was not paying me well. Moreover, I think it is near impossible to  be a successful footballer in India — the selection process is simply unfair. Back then, Nike and Adidas had great advertisements featuring great freestyling moves, which inspired me to take this up.” 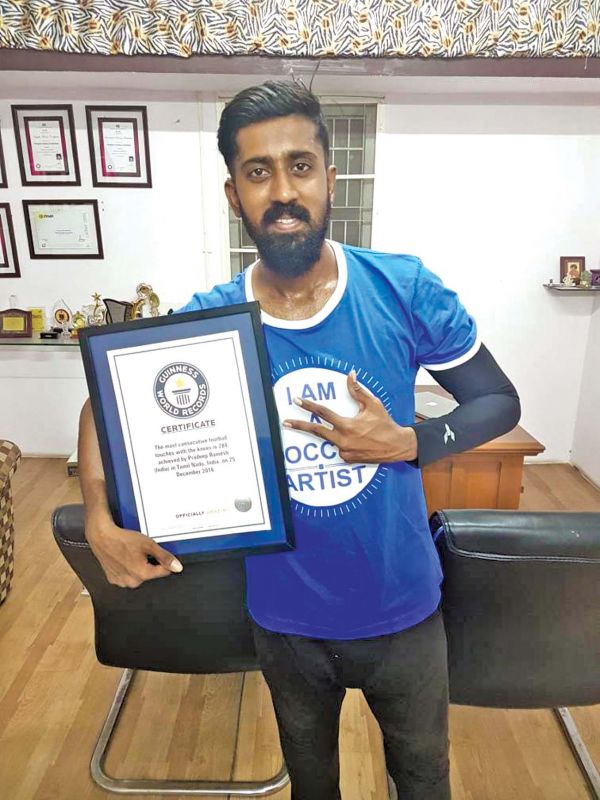 Raghul too, has had an interesting journey with freestyle. “I studied in a government school where there wasn’t much importance given to sport. There was no proper selection process — the football captain would just choose his friends to be on the team. So I couldn’t join them. This coincided with an Internet connection being set up at my home. So I began watching videos — especially those of Ronaldinho’s legendary freestyle skills. I picked it up from there. The Internet is also how I came to know about Pradeep, and we collaborated together for the Guinness,”  Raghul explains. 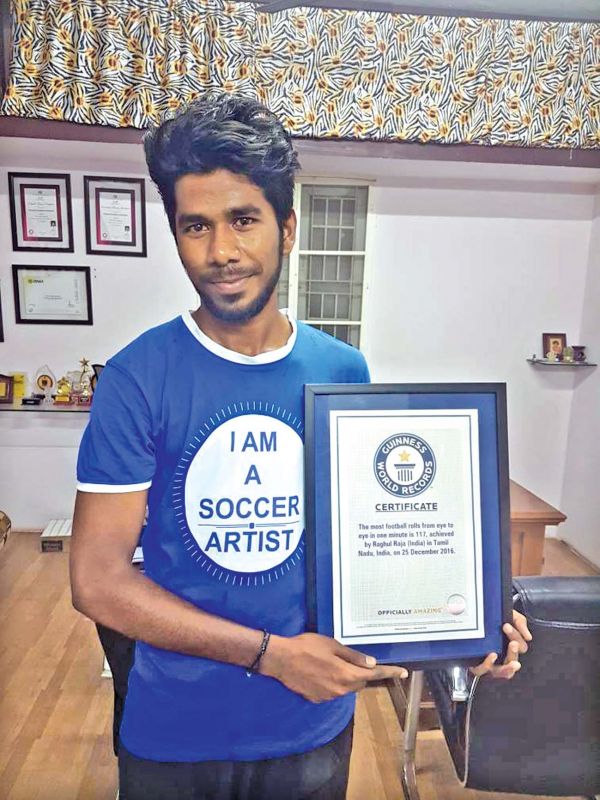 Pradeep says that freestylers don’t have it easy, contrary to popular perception. “I’ve had to market myself to get myself shows, and gigs at different places,” says Pradeep, who has even collaborated with Bollywood stars like Akshay Kumar and Ranveer Singh for films and ads.

Pradeep adds, “Apart from having my own academy and a YouTube channel, the Guinness Record now feels like a crown!”  Pradeep’s YouTube channel — Pro Soccer Art comes out with video tutorials, trick shots, and football related product reviews. He recently did a freestyle based choreography of Ed Sheeran’s Shape Of You, which is gaining popularity.

Speaking about how freestyle  football still hasn’t got its due recognition, he says, “I’m still seen as the guy who does tricks for entertainment. Even at my academy, I have students who give up  the practice too easily when they have to work hard and learn the basics. Now it’s slowly changing with a lot being written about it, and many contests coming up. But the government must realise this and take it forward to be recognised as more than just a form of entertainment. “

Sharing with us about his future plans, Raghul says, “My parents are happy about this feat, but they still want me to go for a regular job. I have joined a BPO, where I will get six days off a month to practice.”

Pradeep, though, is not happy about it, especially since he plans to break many freestyling records in the future. “I don’t want his talents to go waste. If he practices more, he can achieve a lot more than just one record!”