On a spine-chilling Monday evening in San Patricio (Los Angeles), Tulasi Chaitanya boarded a cab. Soon, the driver asked him, “Sir, are you from India? You know what; today’s newspapers had reported that an Indian cop crossed the Catalina Channel.” To which Chaitanya smiled and replied, “Yes, that’s me,” much to the amusement of the cabbie who couldn’t recognise him.

Such is the magnitude of Chaitanya’s achievement that it has become the talk of the town. On September 15, Vijayawada’s Tulasi Chaitanya became the first Indian policeman to cross the Catalina Channel (from Santa Catalina Island to Mainland America), covering a distance of 22 miles in 12:40 minutes. “After my victory, I was so exhausted that I was literally lying on the shores. But it’s an incredible feeling,” recalls the Telugu lad, who is currently working as a Head Constable in the AP Police Department (Civil).

Interestingly, just like the Seven Summits mountain expedition, there are Seven Channels across the seven oceans, and Catalina, across the Pacific Ocean is the second toughest one among them. “This achievement means a lot to me. I realised that I can withstand any kind of uncertain and tough conditions,” says Chaitanya. 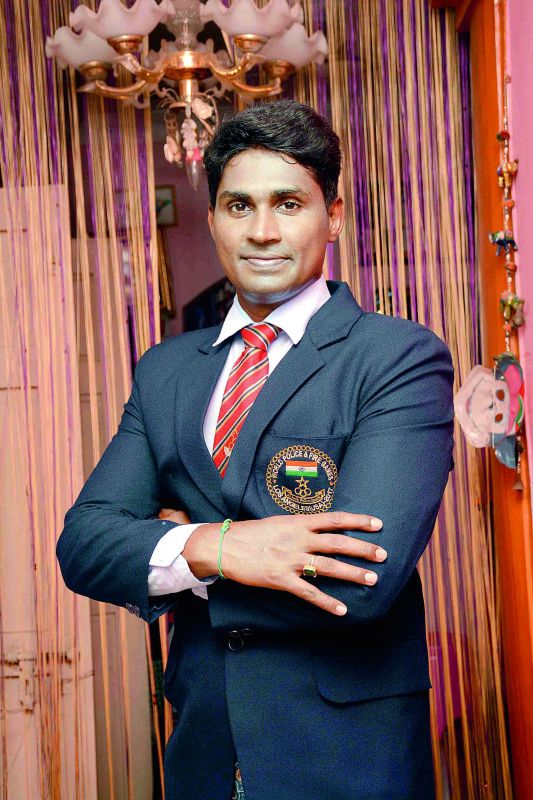 A rigorous training regimen
Elaborating on his preparation, he says, “Apart from my regular practice of eight hours in a swimming pool in Vijayawada, I swam across the Krishna river several times. But to get acclimatised with the cold conditions, I arrived 10 days ahead of the swim, and piled on 10 kilos so that my body fat would help me endure the chilly temperatures.”

Turns out the water temperature was around 14 degrees! “We didn’t know how the current would be and to add to our woes, the waves were pretty high and kept pushing the swimmers back,” he adds.

No turning back
Chaitanya started his expedition at 10.30 pm and completed it the next morning at 11.10 am.  However, he states that he could have completed his challenging swim in nine hours, if not for the overwhelming nausea that hit him midway. “Five hours into the ocean, I started experiencing symptoms of hypothermia. I was constantly throwing up and shivering too. I immediately drank water and an energy drink to counter it, but I was still struggling,” he recalls.

Weathering the storm
Even as he grappled with his symptoms, the warning that the swimmers could also encounter jellyfish, dolphins, sharks and killer whales, was playing heavily on his mind. Ultimately, his past training and experiences inspired him to move forward. “The challenges I faced during my police training were even tougher. So I drew on that experience and pushed myself,” says Chaitanya, who is next eyeing the Gibraltar Strait.

Muted celebrations
While one assumes that Chaitanya will be celebrating his grand achievement, he somberly states, “Clearing my debts are more important to me than any celebrations.”

Also, while his colleague in Punjab was promoted to Sub-Inspector rank four years ago, Chaitanya, who bagged several gold medals in the World Police Games and other international competitions, was last promoted to Head Constable (HC) in 2013.

However, the youngster acknowledges that he could not have achieved his feat alone. “I want to thank Coach Pradeep Kumar, Gautam Sawang (Andhra Pradesh DGP), Dwaraka Tirumala Rao (Police Commissioner, Vijayawada), N. Sridhar (ADGP, Sports & Welfare) and 2011 police training batch for their constant encouragement,” he concludes.