The Kashmir Valley is dear to everyone in India. The scenic splendour of its Dal Lake and its snowy winters has burnt itself into the minds of all who have watched Bollywood movies over the years. The state is an emotional issue for the country as a whole. Despite having been the bone of contention with Pakistan for over seven decades and all the plotting the neighbour does by way of sponsoring terrorism, the people of the Valley have only been torn between seeking independence and staying as part of India.

Terrorism of the home grown and foreign variety has been the beautiful Kashmir Valley's bane. The popular mandate given to PDP in Kashmir and BJP in the Jammu region has been disrupted with the allies falling out over the extension of the Ramzan ceasefire. The State returns to President's Rule for the nth time in its chequered history. The Indian Army, seen as foe or friend in the Valley depending on the person's personal perspective, is likely to have a free hand in hunting the militants and the terrorists. 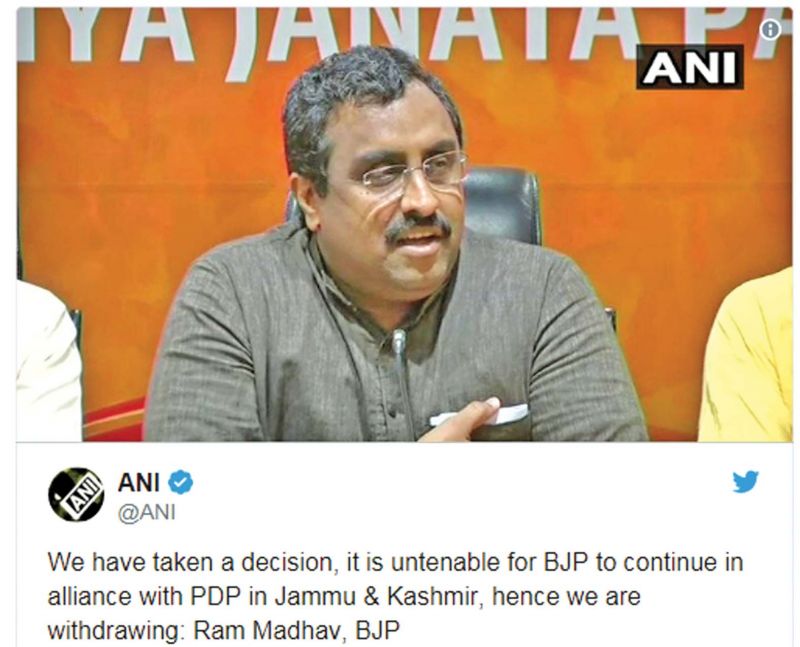 It remains to be seen whether a hardened approach to containing the stone throwers and the separatists will provide better results. Twitterati are very concerned over the fate of the Valley. Their reactions bring out the anger against PDP-BJP. The larger issue of preserving the country's sovereignty and saving the Valley is recognised.

Abhishek Dhakre@ Dhakre Abhishek
BJP during Demonetisation
(Nov 2016 ) - Demonetisation has broken the back of
terrorism.
BJP today ( 19 June 2018 ) - We have decided to pull out of the alliance because
terrorism has increased in the valley.
BJP just exposed two of its failures. #BJPDumpsPDP #BhagodiBJP

Omar Abdullah @OmarAbdullah
What's with this "new muscular policy for Kashmir" discourse that's sought to be created? Was what Mehbooba Mufti oversaw as CM any less muscular? She was unapologetic for all the pain & suffering in 2016 and after

Rajdeep Sardesai @sardesai rajdeep
Am being told we will now have a 'muscular nationalist' policy to Kashmir. But in the last 2 years we have lost more soldiers, killed more terrorists and lost more civilians than preceding period so is even more violence 'muscular'? And when did 'muscle' last resolve a conflict?

ANIL KUMAR MAINI @mainianil56
She did no resign....she was forced to resign and she has herself invited this because of her anti-national and pro-Pakistan utterances

Ajay Dhoot@dhootajay67
Under PDP ,BJP was not sure of security of Amarnath yatris.any adverse fallout would have boomeranged in this election year

Shazia Javaid.@ShaziaJavaid28
Yes,because it was to betide. The bloodshed frm past years has completely ruined kashmir...we agree that it was to pass and we are enough happy with this alliance..as Mehbooba mufti neither was nor is capable to handle or confront the situation of kashmir!

Gourab Mondal @Gourab MondalSun
Mehbooba Mufti DIDN'T Resign, She Was FORCED To Resign. She Had Already Started Working On Polarising Jammu's Muslim Bloc VOTE-Banks On #ISLAMIST-Wahabbi Lines - To Make Her Own Sole Govt. in J&K. #BJPDumpsPDP #BJPPDPAllianceOver Was Need of The Hour For Sake of Our Motherland

barkha dutt@BDUTT
Whispers abound in Kashmir about a split in the PDP in a few months and a reunion of one faction with the BJP. Two names doing the rounds for possible CM. Personally think anything cobbled and built like that - while legitimate politics elsewhere- very bad for a Wounded Valley

Shuja-ul-haq@ShujaUH
2017 was one of the bloodiest years in Kashmir. Close to 380 people were killed including 207 militants.Wonder what PDP was doing when it says it didn't believe in the muscular policy. Also if such tough stand didn't work isn't it the BJP's failure as well?

Ashok@ashok6252
PDP BjP alliance amounted to fishing in troubled waters.The Nation shall see the fallout unravel in several ways.Where is the doubt?

Gratitude to the goddess