Margherita, who was born into a family of artists, started studying Western classical violin at the age of eight.

Margherita Marincola keeps the entry point simple: introduce yourself and sing your favourite song. That’s the icebreaker the French-Italian actor-director has devised, finding the desired result at her workshop alongside the Kochi-Muziris Biennale.

For three days since Tuesday, Margherita has been conducting a theatre workshop at the Cabral Yard venue in Fort Kochi. Exploring space — Intensive Acting aims at freeing the trainees from inhibitions so as to perform better on the stage. “In theatre, one should be free from all apprehensions,” she notes. “These are techniques that will help the participants feel comfortable in a new group so as to emote and act unfettered,” points out Margherita, who has followed her parents’ Compagnie Picatrix theatre troupe.

To the artiste, this workshop is for both performers and non-performers. “It is for anyone who would like to explore their creativity through stage and performance,” adds Margherita, who has often worked backstage helping with costumes and props and assisting the theatre director Lionel Véran, who taught her the basics of stage direction. 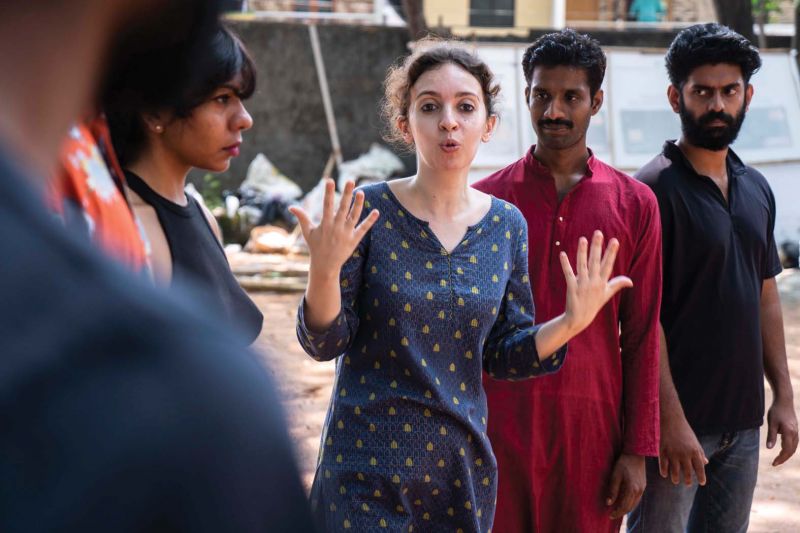 At the biennale art room here, she uses simple exercises and techniques of the improvisational theatre world to the benefit of the participants. The idea is to make the participant understand different measures of space and how to utilise each of them optimally, explains Margherita, a graduate in Indian Performing Arts at University of Vicenza in Italy.

Margherita, who was born into a family of artists, started studying Western classical violin at the age of eight. Then, in 2004, she travelled to India to study Hindustani vocal under eminent artists. Her gurus continue to be Bhaskar Subramanian, Ajay Pohankar and Krishna Mohan Bhatt. In 2014, she won the prestigious Amici del Conservatorio prize for her singing performance at the Music Conservatory of Vicenza. “I have always been fascinated with Indian culture and history. Music has been a connecting link,” shares the multi-facetted artist, who now shuttles between India and France.

The day one, Margherita’s trainees also had a close look at four installations at the biennale’s main Aspinwall House venue. They were of Shirin Neshat, Shilpa Gupta, Song Dong and B. V. Suresh. The artiste later let her trainees do an improvised piece at nearby Pepper House as a reflection of the biennale experience.

At the end of the workshop, the artiste plans to do a performance based on late English playwright Sarah Kane’s work called 4.48 Psychosis. Ahead of that, Margherita has divided the participants into groups of five, having spread the pages of the play on the floor. Each group picks five pages each. “The idea is to see how one performs when the time for preparation is limited and you get random fragments of a scene,” shares the mentor who has made appearances in the TV series Chidiya Ghar (Hindi) and Uncha Mazaa Zoka (Marathi).

Atul Ramkumar is an acting student who has come for the workshop with his classmates of K.R. Narayanan National Institute of Visual Science and Arts in Kottayam. “We got only five minutes to prepare, but we learned an array of techniques like different ways to see the fragments, space utilisation etc.,” he says.

“I have never attended a workshop like this before. I just want to try my hand in acting,” says Aadira Srinivasan, a graduate from Delhi who was visiting biennale.