The power of dreams

‘I did not do any hard work, so to say. I am one of those who studies a day prior to the exams but yes, I am a bookworm. I read whatever I can lay my hands on. During my school days, I was actively involved in youth festivals

The voice at the other end of the phone sounds baffled as Thejaswini S. asks, “Why me? I am one amongst many others who has achieved this; so why am I special?”

Thejaswini has just secured admission to a university in Paris to complete her PhD fellowship in Neurosciences after passing out from the Indian Institutes of Science Education and Research (IISER) in Thiruvananthapuram. What is special about Thejaswini is that she has completed all her schooling from state-run schools and still managed to secure admission to a prestigious university. She may not realise the inspiration that her life can be to countless students studying in government schools, who are made to feel inferior to their counterparts studying in ICSE, CBSE, public and convent schools. What is to be stressed here is that irrespective of the syllabus, education helps to create ladders of opportunity for all students, like it did for Thejaswini.

Hailing from Chirayinkeezhu in the state capital, Thejaswini’s father is a railway station manager and mother, a homemaker. Her brother Abhimanyu and his wife are pursuing their PhDs and it is easy to deduce where  Thejaswini’s inspiration stems from. “My brother has been my biggest influence in pursuing PhD and he is my role model! He is one of those hardworking, bright kind of people.”" 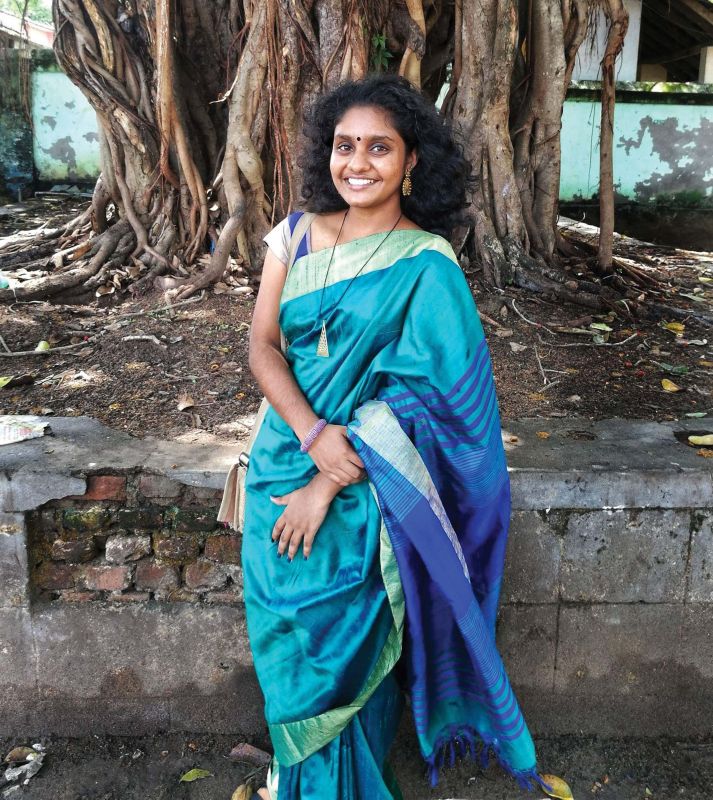 My brother has been my biggest influence in pursuing by PhD and he is my role model! He is very hardworking. —Thejaswini on her brother Abhimanyu who is pursuing his PhD

It is not easy to secure a seat in the prestigious IISER, which means Thejaswini would be that bookworm who would have burnt the midnight oil since a young age to secure good ranks. She laughs and surprises with her answer, “I did not do any hard work, so to say. I am one of those who studies a day prior to the exams but yes, I am a bookworm. I read whatever I can lay my hands on. During my school days, I was actively involved in youth festivals and participated in dance and drama.” Thejaswini is a trained classical dancer proficient in Bharatanatyam and Kuchipudi, she informs.

It was only in the final year at IISER that Thejaswini really burned the midnight oil. “The result of that is my PhD,” she adds. She wanted to become a doctor and it was her father who informed her about IISER. She wrote the entrance exam without any hope of being selected but she was, and the next five years that she spent there changed her life. So,Thejaswini who liked Maths and Physics took up Biology and fell in love with the subject, finally taking up Chronobiology. “The freedom and atmosphere there made my aspirations flourish. The ambience was a calm and quite one with everyone speaking science.”

The initial days of first year were slightly difficult for Thejaswini. The jump from a state school to a university is not an easy one. “Speaking English fluently was a hurdle I faced. I could not find the right words at the right time, so I made sure to read books and converse with my friends in English. I was nervous about making presentations in front of people, but soon all those hurdles were crossed,” she candidly says.

Thejaswini came to know of the university in Paris called CNRS from her seniors who were studying there. She decided to send a mail to the university expressing her interest in pursuing a PhD there. She explains, “There was a Skype interview during which I was asked about my areas of academic interests. I was then told by Deputy Director Francoise that there would be a project where I could submit my fellowship.” Thejaswini was in Paris two weeks ago to do a presentation in front of 25 eminent foreigners and thereby successfully secured her admission. What a jump for a girl who was jittery about standing in front of her class in Kerala and giving a presentation! Incidentally, out of nine people selected for the project from across the world, she stood fifth.

Thejaswini will be flying off to Paris in October to pursue her course. Talking of her future plans, Thejaswini reveals, “Right from my childhood, I have always been fascinated by the teaching profession. I would like to be a scientist or a guide in my secret dreams. If that is too far-fetched, I would aspire to be a lecturer and impart knowledge, especially to children.” Of course, hard work, determination and proper planning will take you to wherever you want, as Thejaswini herself has proved.