These youngsters recently scaled the peak.

Shaik Himamsa, K. Raja, Surya Prakash and A.K. Rani, a group of youngsters from Andhra Pradesh, braved extreme temperatures, blustery winds and blinding blizzards to scale Mt Everest and touch the summit early on Wednesday morning. They are the first people to accomplish the feat this season. Vara Prasad and Sarat Varma, two other members of their group, are expected to reach the summit by Saturday.

Their expedition is part of “Mission Everest: AP Youth on Top of the World”, an initiative launched by G. Komal Kishore, the Special Commissioner of the Youth Services Department of Andhra Pradesh, with the aim of empowering the youth and generating employment. 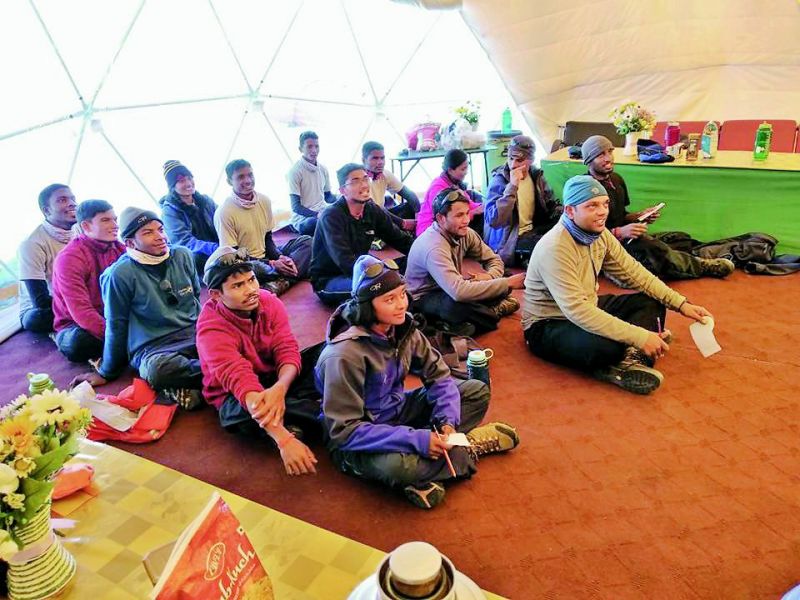 Participants at the Mount Everest Base Camp

Mission Everest is one of the programmes under this policy. Aspiring mountaineers from the state must go through various endurance programmes and tests before they are given the opportunity to scale the peak.

“Initially, we conducted programmes like rock climbing and rappelling, on the basis of which we selected 60 people. Then, we sent them for mountaineering courses in the Himalayan ranges. Those who got an A-Grade were sent for advanced courses, and eventually, the top six people were selected. They have been training and regulating their diet for a couple of months now,” she says. The cost of the expedition is about Rs 25 lakh per head.

How does the program improve their employability, you may ask. “Successful completion of the expedition is a testimony to their abilities. The government is planning to establish several adventure academies, which need manpower. These people, who have already proved their mettle, will be hired as guides, trainers, etc., at the academies,” she says.

Providing an example of a mountaineer who has used his skills to build a successful career, she says, “Mountaineer Sekhar Babu worked in our Youth Services Department 15 years ago. Today, he is able to provide jobs to several other people. The whole idea is to generate employment by hiring the youth to work in the Tourism Department or preparing them for self-employment after successful completion of the expedition.”

Explaining the name of the programme, she adds, “Honourable AP chief minister Chandrababu Naidu, always talks about being the best in the world. Since the peak of Mt Everest has the highest altitude in the world, the programme is titled so.” The Government of AP is already planning another expedition; a 40-member team will attempt to scale Mount Kilimanjaro, Tanzania in July.

“The training for the expedition has already been completed,” she concludes.