Bathukamma celebrations in the city

Being a fairly cosmopolitan city, Hyderabad makes everyone feel at home. And it is during the festival of Navratri that people from different communities and cultures come together to celebrate. Among the state’s indigenous Telugu community, however, Dasara is one of the most widely celebrated festivals.

But unlike other communities, the Telugu community celebrates Dasara with different traditions across the state.  Some Telugu communities setup intricate golus, some celebrate Bathakumma, while others have lavish and elaborate animal sacrifices on Vijay Dashami. The rituals and traditions of Andhra Pradesh lend a different flavour to the festivities. 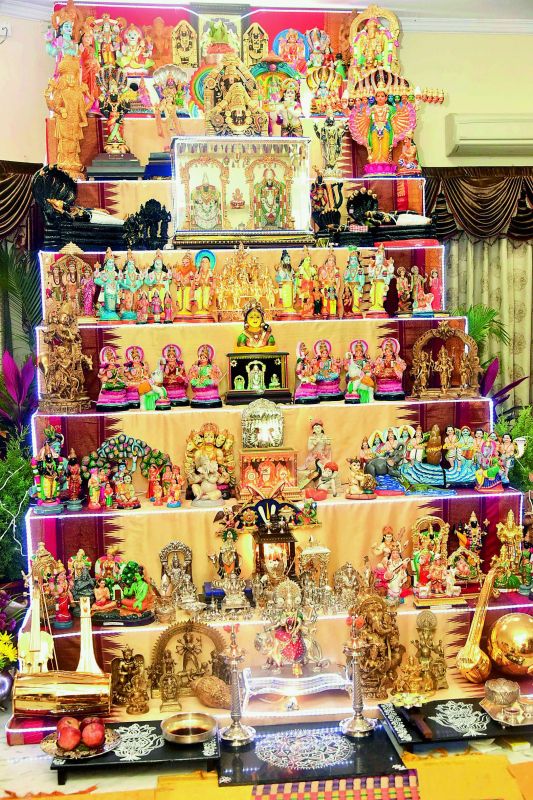 Classical dancer, Ashrita Vemuganti talks about how she spends Navratri mostly performing puja at temples and reminisces about time spent with the women in her family. “Dasara brings warm memories of playing Bathukamma, watching my grandmom and aunts singing rhythmically and then joining friends for a round of dandiya. As a young girl training in Bharatanatyam, Vijaya Dasami meant offering wishes to my gurus and for the last five years particularly, Navratri has been celebrated with temple performances along with my dance partner Vaishnavi. Apart from meeting and greeting our near and dear ones and seeking their blessings, there is also the excitement of choreographing songs on Ammavaru and presenting them in the precincts of a place of worship,” she explains.

On the other hand, artist Bhaskar Rao, has a more cosmopolitan approach to the celebrations. “As artists, we belong to a group of people who have come to Hyderabad from different states. But we mostly have Bengali artisans with whom we spend time during their Durga Puja festivities. Also a lot of my time goes into teaching art. But yes, the traditional settingup of the golus and playing Bathakumma is always a part of our Dasara celebrations!”

Prasuna Murali, painter and resident of the city, loves the fact that Dasara brings together family members from across the city, despite everyone’s busy lifestyle. “Dasara for us is quite special because it brings together everyone in house. The speciality is we put up a golu. It’s like seven or nine steps decorated with figurines of gods and goddesses. Below that we sometimes make a scene of a village  that the family holds dear. It’s really an occasion to meet all our friends and extended family because we invite everyone to come and see the golu and take the blessings of the God,” she sums up.