Imthiyas also created a finger dancing video for Valentine's Day and made a national record.

Pirouetting on your feet is so yesterday! Ask Imthiyas Aboobacker and he will show you how swiftly his fingers pirouette. Yes, Imthiyas Aboobakcer is famously known as the ‘finger dancer’ or rather the only finger dancer in the country. Earlier this week, Imthiyas attempted a world record by organising ‘Rhythm of 1K1 hands’, which saw him bringing together 500 students in a finger dancing event. Imthiyas is one of the only two finger dancers in the world. “I am also the only finger dancing instructor in the world,” he clarifies. He discovered this rare talent by accident. “I happened to watch the English movie Psycho and noticed how the camera focused on the central characters’ fingers. Interestingly, Tom and Jerry also inspired me. Especially, that episode in which fingers dance on the piano. Being a choreographer and an instructor, I use my finger to show students how to move in a certain way. This is how I stumbled upon the art of finger dancing,” he says. Imthiyas was initially mocked at for coming up with this dance style.

“I first told my mother and she designed a small costume for my fingers. I composed a folk dance with my fingers and uploaded it online. It was well-received. After this, I organised the first finger dancing show in 2011 in Mattancherry. It was the first such show in the world. I also found out the world's only other finger dancer is from Israel,” he says. Imthiyas also created a finger dancing video for Valentine's Day and made a national record. “I applied for a Guinness record at that time. Although my effort was appreciated, the request was rejected since the record cannot be broken,” he says. For Imthiyas, dancing runs in his blood as his uncle and aunt were dancers. He was introduced to this art at a very young age. By the time he finished class 10, he had his own dance troupe. 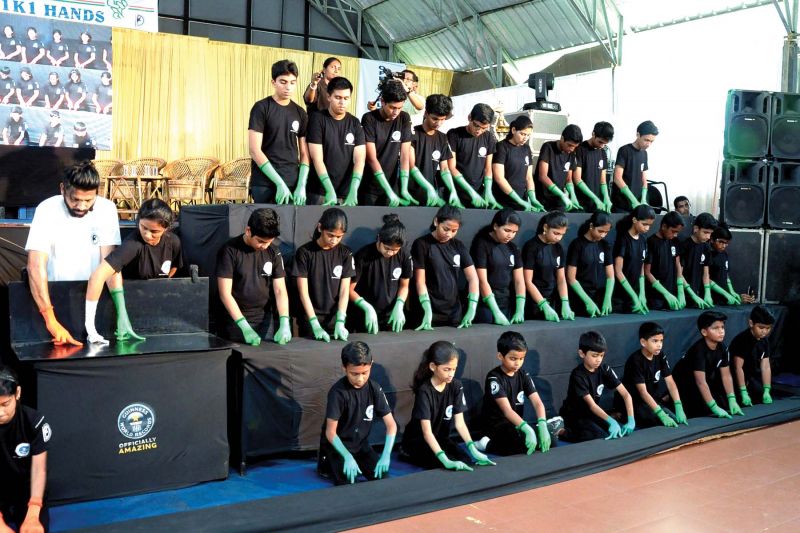 “My introduction to dance happened way back in the 80s,” says Imthiyas. In 2004, when he had his own dance troupe, he was selected by Saroj Khan to be part of an international dance company. He stayed with it for 11 years. He was also a background dancer in Bollywood for a while. Speaking about his latest Guinness attempt, he says, “It was no easy feat, but was worth it.” He trained the students of Gregorian Public School, where he once taught, for days, before setting out to create the record. “Setting a world record was on my mind ever since it was first rejected, I conveyed this wish to the principal of Gregorian School, who was very supportive of the idea. The song used for the performance was a five-minute mash-up of Vande Mataram, a new one arranged for the performance, a song from the movie Roja and the iconic Mile Sur Mera Tumhara. We set it for five minutes as per the guidelines sent to us from the Guinness Book of World Records,” he says.

Imthiyas feels the best part about this attempt is that this is a first-of-its-kind in the world. He is especially proud of it being held in India. Giving more details about the effort that went in behind the scenes, he says, “I began the work for this performance in June. It took us one week to select the students for the performance. We called them individually to check the flexibility of their fingers. We selected those who could quickly catch dance moves on both left and right fingers. We also chose those with long fingers. These were students from classes 5 to 11. After the selection, I segregated them into batches of 100, 95  and 80 and trained them with cameras. These cameras focused on my fingers, which were projected onto a big screen. It required a lot of time and patience. I am very happy because the kids worked really hard to learn the steps,” he says.