The Young Man and the Sea: Dheeraj, the maritime Magellan

At 17, as his peers worried about exams and friends, Dheeraj M. Nanda was exploring the oceans at a depth of 40m, making his acquaintance with anemone, sharks and giant turtles. An accomplished rescue level diver, cyclist, wildlife and underwater photographer, Dheeraj tells Ralph Alex Arakal about a journey that began when he was still a toddler and his dreams of joining the Indian Navy to help protect the ocean he loves so much

Dheeraj M. Nanda is never more comfortable than when he leaves his comfort zone. In 2017, Dheeraj, who was 17 at the time, returned from Malaysia, having completed his 100th Scuba Diving experience, where he was blown away by the magnificence of aquatic life. He talks excitedly of pilot whales, rare shark species, turtles and lots more. Only a teen, Dheeraj is an accomplished rescue level diver, cyclist, wildlife / underwater photographer and a budding conservationist, while his peers worry about the next round of semester exams.

“My dad and elder brother were divers and we would spend our time as a family watching documentaries and films on NatGeo and the Discovery Channel.” He remembers being mesmerized by it all and always wanted to witness this beauty first hand. His interest began when he was still a toddler and when it continued to grow over the years, his parents decided to enroll him in an open water course at Barracuda Diving, Goa. He was 10 years old at the time. He trained under Venkatesh Charloo, who also happened to be a close friend of his father. “By 2012, I pursued the advanced open water course and finished it successfully, enabling me to dive to depths of 40 metres or more,” he says.

All these extraordinary accomplishments found themselves packed into an already busy school schedule – “That’s what summer vacations and long weekends are for! Going outdoors and living amidst nature was far more enjoyable than being immersed in the gadget-driven virtual world,” he says. 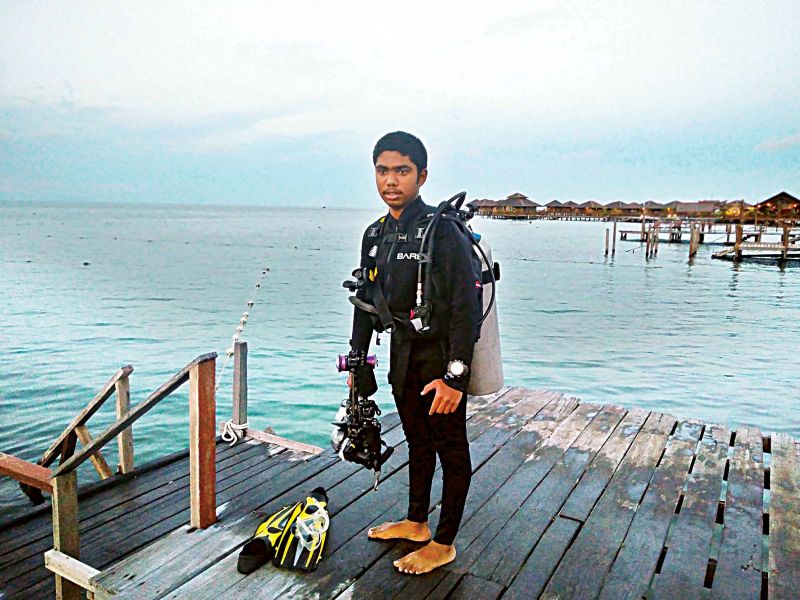 Dheeraj M. Nanda was exploring the oceans at a depth of 40m

In Dheeraj’s home, the television was never called “the idiot box,” a far cry from most other households at the time. As he watched numerous documentaries and slideshows from the underwater world,  he found that there was very little Indian presence. “This pushed me even more towards being a pioneer in the field from nation,” says the Young Photographer of the Year 2017, an accolade that came to him from the Royal Society of Biology, London. Another feather in his cap is the fact that he holds the record of being the most awarded Indian underwater photographer and earned himself a spot in the India Book of Records.

Also an accomplished cyclist, Dheeraj is a three-time Bangalore Bicycle Champion (BBCh) and has been instrumental in organising a 460-km cycling journey from the city to Kabini river spreading awareness on wildlife conservation. Dheeraj is also the youngest in the nation to complete a 200km series in 13.5 hrs, an accomplishment he managed at the age of 11! Elaborating on his stint on ‘diving with the lens,’ the budding conservationist believes that attaining proper training to be a diving professional was essential to ensure not to harm or damage the underwater environment while clicking photographs.

“Maintaining neutral buoyancy was important and I tried to master the technique during my first 35 dives. It was only during my 50th dive at Tioman Island, Malaysia in 2014 did I click my first underwater photograph. This was of his favourite anemone and a school of clownfish! Apart from his fascination with stills, Dheeraj uses his photos and short videos to become a Vlogger, with content that focuses, naturally, on conservational awareness. “Whether we know it or not, we all contribute to polluting the sea in one way or another. Through my vlogs, I would like people to see the after effects of our actions and help them understand what we can do to save our oceans, the fascinating aquatic environment and the ecosystem in which it all rests,” he says.  Currently seeking a seat at a renowned college for his B.Sc in Agriculture, Dheeraj hopes to be an IFS officer or dreams of being in the Indian Navy, where he feels he will be in a better position to safeguard the country’s oceans.

Born to entrepreneur Mr M.N. Nanda Kumar and Medical Electronics Professor Mrs. Vijayalakshmi K, this multi-faceted storehouse of talent believes that performing well at school is crucial to the larger journey. Dheeraj also scored a ‘satisfactory’ (according to his parents) 8.8 CGPA in Class X, after which he decided to study Science. “Luckily, I was never pressurized by my parents or anyone else in the family to choose between engineering or medical careers. They have always been supportive and I have always shared my dreams and aspirations with them,” he says.

Convincing your parents that there’s a profession out of everything at this time and educating them with all the information available is something I would advise to my counterparts. One should be 100% confident in what we need to pursue and should tirelessly work hard to prove your mettle in that domain. The rest will follow,” says the youngster as he rushes back to MVJ PU College, Banshankari along with his brother to fill in forms for the upcoming CET exams.