To this day, Uno, a beagle remains the most popular dog in Westminster history. (Photo: AP)

New York: After all these years, Uno is still No. 1.

More than 2,700 dogs entered in the Westminster Kennel Club show that started Monday, with a couple of clear favorites. Rumor the German shepherd and Charlie the Skye terrier head the pack, and could be picked as the nation's top pooch.

A borzoi, a shih tzu and bulldog took winning steps, too. 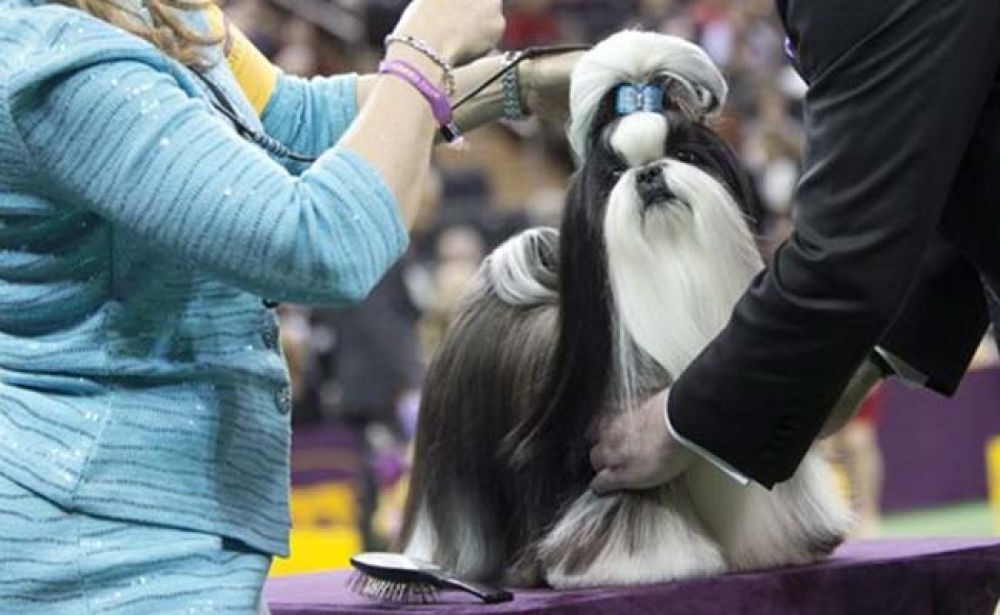 Panda, a shitzu, is inspected by the judge in the ring during the Toy group competition during the 140th Westminster Kennel Club dog show. (Photo: AP)

Their owners can only hope those champions become another Uno.

Uno barked and bayed his way to best in show at Madison Square Garden in 2008. To this day, the beagle remains the most popular dog in Westminster history.

Almost 11, Uno was back at the Garden on Monday night to take a bow.

"Like they said, he's America's dog," handler Tristan Huebner said. "Everyone loves him."

The brown on Uno's face has turned mostly white, his black side panels have faded. But he's in great health and still barks up a storm, as he did over the weekend during a trip to Rockefeller Center.

"I never get tired of his famous howl. It was the howl heard around the world," Huebner said.

Uno was in town to film an ad for the summer movie "The Secret Life of Pets," an animated comedy featuring the voices of Kevin Hart, Lake Bell and Dana Carvey. Wagging his tail a mile a minute, Uno came with the red, white and blue leash that President George W. Bush gave him as the first Westminster winner to visit the White House.

No beagle had won the Westminster show until Uno, and he drew a standing ovation from a packed Garden crowd the night when Aaron Wilkerson guided him around the ring.

"He was an everyday dog that people could relate to," longtime Westminster television host David Frei said.

Uno lives on a 200-plus acre ranch with owner Caroline Dowell in San Leanna, Texas, near Austin. He plays outdoors with a neighbor's potbellied pig and romps around the house with other beagles.

Uno got a ride to New York with Dan Huebner, Tristan's dad and the manager of Dowell's ranch — "1,754 miles, about that," he said. Uno originally was going to fly aboard Purina's plane and when that didn't quite work out, Ann Viklund of Nestle Purina PetCare and their team helped arrange his stay.

Rumor has already won 101 best in show titles, including the big AKC/Eukanuba event last December. With fans chanting and calling her name, Rumor took the herding group Monday night to reach the final ring of seven.

Lucy the borzoi won the hound group, as did Panda the shih tzu in the toy category and Annabelle the bulldog in the nonsporting competition.

The top sporting, working and terriers get chosen Tuesday night, followed by the best in show pick shortly before 11 p.m. 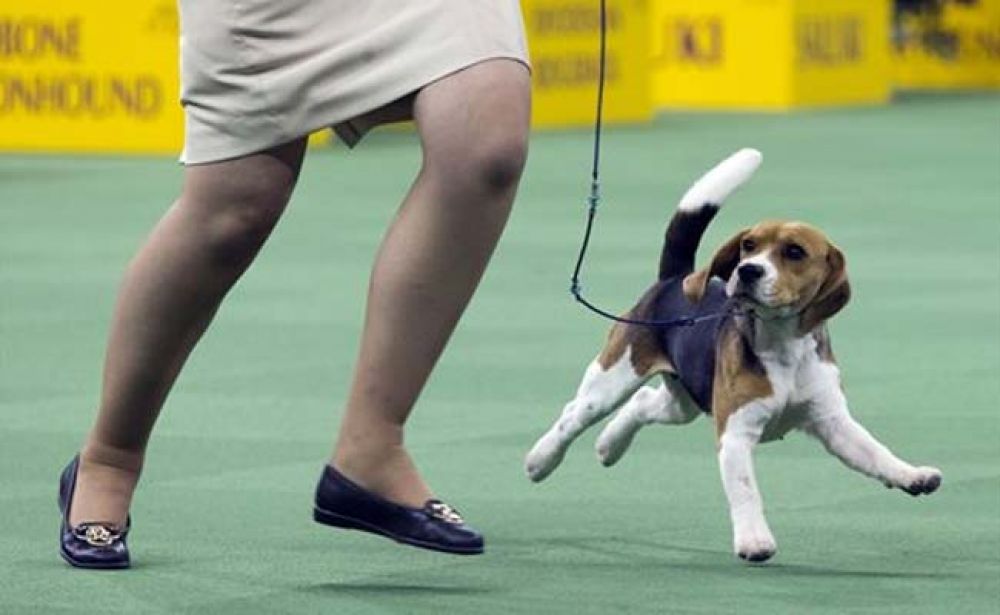 Molly, a 13-inch Beagle from Bangkok, Thailand, is shown in the ring during the Hound group competition during the 140th Westminster Kennel Club dog show. (Photo: AP)

Earlier in the day, Inuk the American Eskimo dog won the breed for the eighth straight year, tying the show record set by an Akita in 1995.

Ricky the standard poodle prevailed in the breed judging, but was beaten out by the bulldog in the group. Two years ago, Ricky won Crufts, which is the largest dog show in the world with more than 21,000 entries in England. 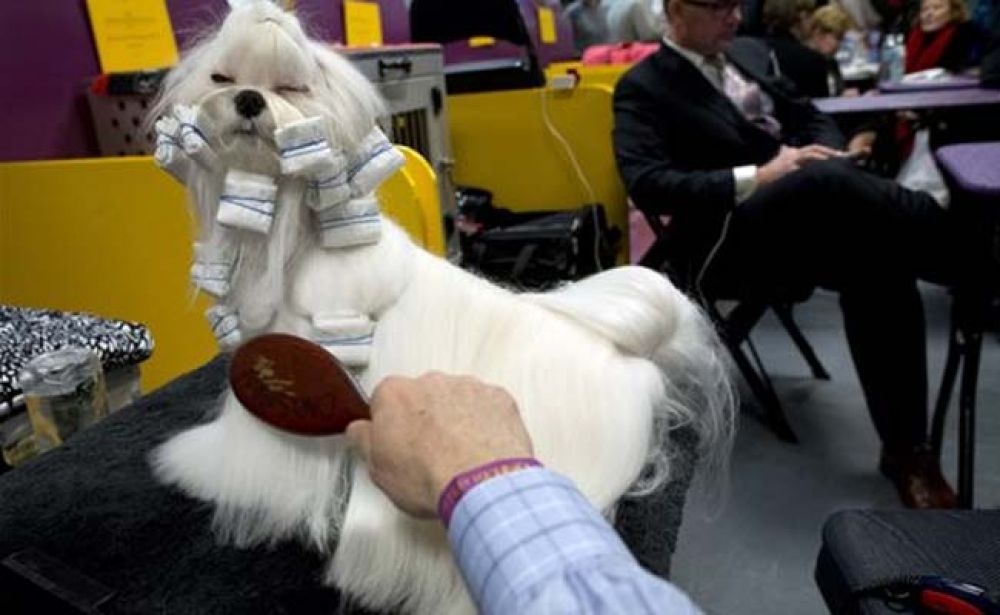 Patricia Hearst Shaw won an award with her French bulldog. Over the years, she's done quite well with the breed.

"You make an educated guess when they're young whether they have a chance to do well," she said. "They you hope they can hold it together."

PERFECTLY PRIMPED: Less than an hour before Bugatti was due in the ring, Michael Parks was in fast motion prepping his toy poodle.

These are hardly wash-n-wear dogs.

"It usually takes a few days to get them ready for the show," said Parks, from Austin, Texas. "I started Friday and still have work to do."

Nearby, Joseph Vergnetti of Cleveland was preparing Maria, his black standard poodle. He was working with a dozen pairs of scissors, several combs —"fat ones, thick ones, thin ones, everything," he said — hairspray and a bunch of ties and bands.

Vergnetti said it takes seven to 10 hours of grooming to get a fine poodle ready for the ring, including up to three hours on show day.

Lindsay Gorder was busy snipping away hair on the poofs, called rosettes, on her white standard poodle Paris.

"We have to clip them all down, and we shave their rear, the face, tail, feet, everything," she said.

"They used to be water retrievers and so when they dive in the icy water, they had to stay warm but also buoyant. So we shaved off all what is unnecessary in here. These rosettes keep the hip joint warm and these keep the wrists warm," she said.

BEDTIME FOR A BASENJI: Be it a fluffy pillow, a jogging path in Central Park or a late-night snack, Jerry Grymek is the go-to guy this week — for dogs, that is.

His nametag says it all: Doggie Concierge.

Grymek is in his 14th year — "two dog years," he points out — helping make dogs and their owners feel comfortable at the Hotel Pennsylvania, right across the street from Madison Square Garden.

There are 600 dogs staying at the hotel and they're the true VIPs, or as Grymek calls them, the "Very Important Pooches." They have their own spa with grooming tables, treadmills and even an exercise area full of toy fire hydrants.

Special requests? No problem. He once arranged for an opera singer to serenade a spinoni Italiano to soothe its nerves. The dog "barked for an encore," Grymek said.

Grymek also has come to expect special arrangements in the room, especially when someone asks for an additional cot.

"That's for the owner," he said. "The dog sleeps on the bed because it's got to get the real sleep."