Karnataka: The throne’s ready, now wait for the fest!

Also, the festival will this year offer special packages for the bicycle sharing system  to promote use of bicycles among tourists enjoying the city, with special discounts on registration and user fee (Photo: DC)

Mysuru: With hardly 10 days left for the spectacular Mysuru Dasara, which draws tourists from across the country and even the world,  the historic golden throne, weighing 280 kgs,  was assembled on Friday for the "private darbar" that the scion of the Mysuru royal family , Yaduveer Krishnadatta Chamaraja Wadiyar will hold during the festivities  at the Mysuru Palace.

The gem- studded throne, dismantled after Dasara last year and stored in the strongroom of the palace, was removed amidst tight security and assembled for the upcoming event.

Meanwhile, it has been announced that  India's chess grandmaster, M S Tejkumar, will carry the Dasara  sports tattoo presented by Chief Minister Siddaramaiah on  September 21, the inaugural day of the festival, and  women cricketers, Veda Krishnamrthy and Rajeshwari Goekwad will inaugurate the seven- day Dasara Sports the same evening.

Also, the festival will this year offer special packages for the bicycle sharing system  to promote use of bicycles among tourists enjoying the city, with special discounts on registration and user fee. Users will not only be given a QR code instead of a smart card, but will also be able to park their bicycles at any of the existing 52 docking stations. Three additional manned bicycle stations are being set up adjacent to  three gates of the Mysuru Palace, according to Deputy Commissioner, D Randeep 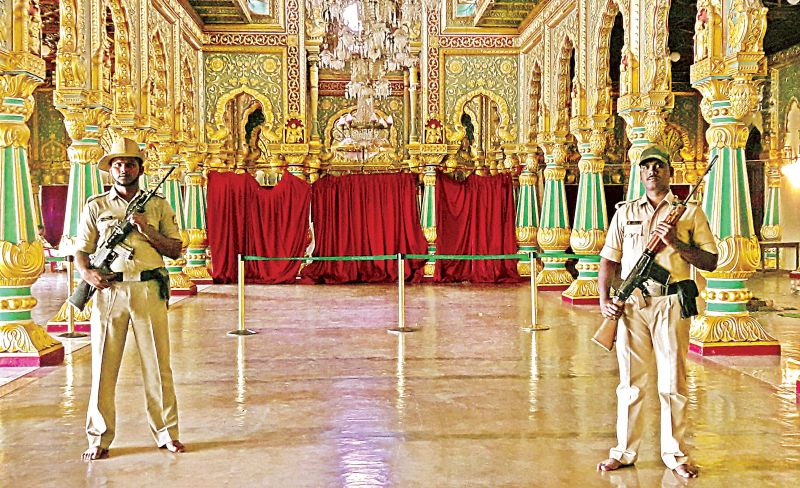 In other decisions, tourists buying gold cards at a cost of Rs 3999 will this year  have the privilege of watching the Dasara before the Mysuru Palace, and also be able to visit  places of tourist interest.