Chennai: A retired flight lieutenant of Indian Air Force residing in Nandambakkam defence colony in south Chennai is now a busy person teaching mountaineering and jungle skills for school kids and their families. M. Nagaraj, who put her daughter Anjali and wife Hema into trekking, some 10 years ago, last week completed the trek at Kilimanjaro walking with clouds and at times, surpassing the cloud line resulting in high altitude sickness hammering the head.

After testing the trails of the Himalayas and south Indian tiger reserve forests, the family with the youngest trekker in Chennai has now left trails across mountains, forests and glaciers. “The fact that a teenager can conquer Kilimanjaro, the tallest mountain in Africa, despite odds, should inspire other kids from Chennai into trying the adventure sports”, says Nagaraj who left the IAF after completing short service. 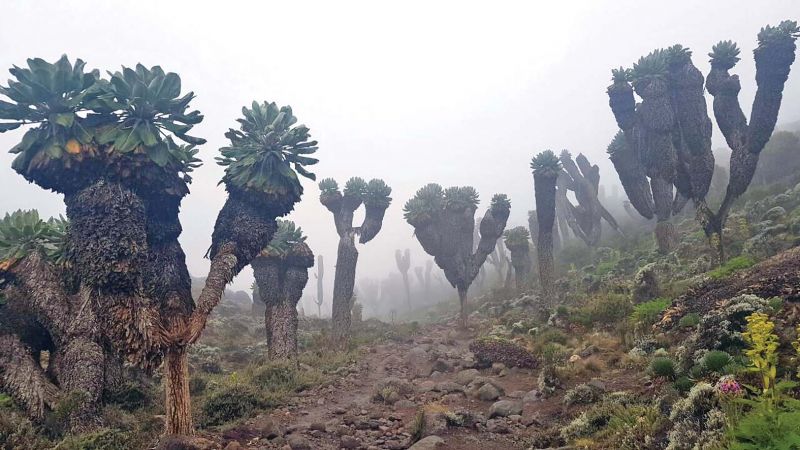 The trail road which leads to Mt Kilimanjaro has a thick vegetation.

Most of the parents fail to understand the significance of family trips and adventure sports. Mountaineering is also part of parenting.  These events, teach you survival tactics increases self-confidence and makes you a positive person in life. Above all fitness is assured, adds Nagaraj.

“I was on the mountain for seven nights and my dad was taking a class on the equatorial and arctic zones explaining the geological positioning of major mountains. Whereas my mom was with tears spending sleepless nights, as she knew that I was suffering acute mountain sickness”, recalls 16-year-old Anjali. The Tanzanian guides were really caring and learnt a lot from them. “My previous trek to Surya Peak in the Himalayas helped me a lot, but my first love is always the Nagala Mountains sandwiched between Tiruvallur and Chittoor districts, located close to Chennai.”

According to members of Chennai Trekking Club, treks teach the basic disciplines that a person needs to survive. “We are seeing families now taking up treks in parts of the Eastern Ghats and this is a nice trend now gaining momentum in Tamil Nadu, but this concept of trekking started only after 2004”, said a forest official posted at Kodaikanal where three trek routes exist to reach the mountain from base camp.