I travel, therefore I am

AThat post and those pictures were put on Facebook more than a month ago. On top of the hills at Kodikuthimala, a few women were sitting with their heads bent down in prayers, offering namaz. That post has had more than 5000 likes and several hundred shares. Below it are hundreds of comments, criticising the women for the photos, several of them taking an abusive note. But Rafiya Sherin who has made that post stands by it. She believes in her religion, and she believes in her rights.

Rafiya is only 20 years old. She is a final year degree student from Malappuram. She is also a traveller. She had found the joy of travelling alone a little while ago, an unlikely story for a girl coming from the remote areas of Manjeri, bound by the many restrictions society still weaves around women like her.

She calls these stereotypes which must be broken. Talking to her, you don’t hear a rebel’s voice doing things out of her way only to break the rules. She is doing what she does because it gives her joy, and more than that, it becomes a quest to find herself. 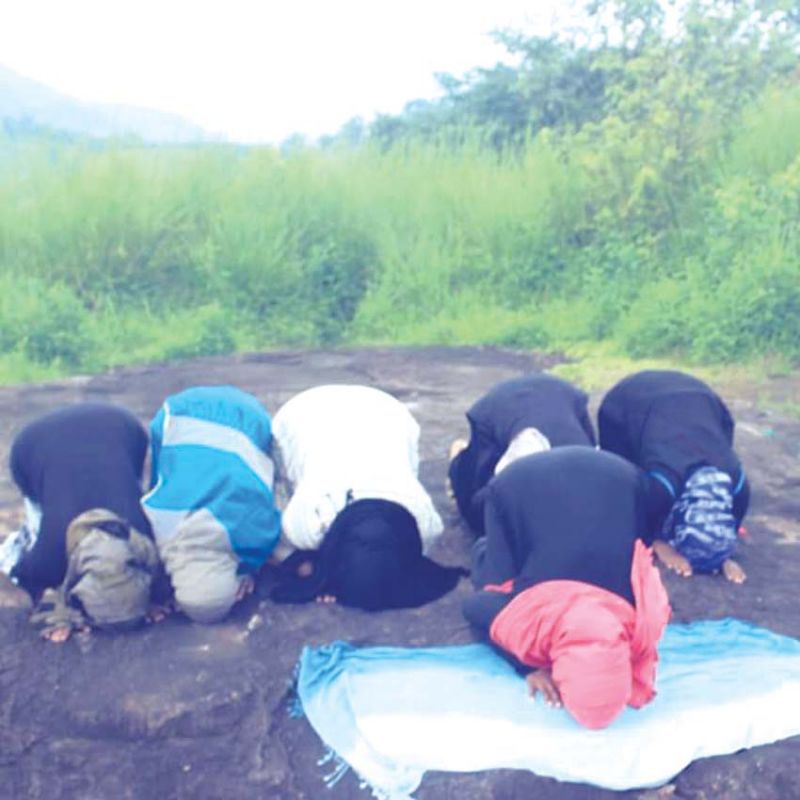 “Every trip is a quest, of finding yourself, your identity. It is not about the places you see, not the established images you have of travel. It is about the ambience that you get. It can even be the pond next to my house, it needn’t be far away,” says Rafiya.

This trip to Kodikuthimala had been a group trip. A few of them — married folks among them, people with children too — decided to form a group and take trips every month. The first of these had been that trip. “It was simply the time to offer namaz and we took our prayers. We took them in turns so we could use the few socks we had to cover ourselves.” She did not expect it to become so viral and invite so many comments. “They were teaching me religion, telling that I should be ousted from Islam. But I know my religion. Islam teaches you to gain knowledge. It doesn’t stop women from travelling or gaining knowledge.”

There were no problems at her home. Her dad who had been abroad and only recently come to settle in Kerala, told her she could go out and explore all she wanted, just that she always tell him where she is. “So he could come to my rescue if there ever is trouble.” Her mom supported her too, but she’d be worried about her safety in solo trips.

The first of these solo trips had begun more than a year ago. “I had been asking others, but they would either be too busy or get cold feet. So I thought I should go alone.”

It had happened without any plan. She was standing at the KSRTC bus stand in Kozhikode, to go home to Malappuram. When she saw an Ernakulam bus pass, she just climbed onto it. “I reached Ernakulam around 3.30 am, had tea there and didn’t know what to do. So I took another bus to Palakkad.” At Palakkad she went to Anakkal, the basement area of Malampuzha dam.

Having tasted that beautiful feeling that travelling solo could give, Rafiya continued her little jaunts. She went to Ooty, to Wayanad, to Idukki.

“One of the best had been to Boothathankettu. I stayed with a friend’s friend’s relatives. A middle-aged couple who had been really nice to me.” She describes going to the nearby canal with the chechi at 3 in the morning, taking a bath together, simply sitting on those steps and feeling bliss. To Boothathankettu she was going alone with a guide when a shopkeeper said he would join her, she should not go alone. “You are never alone in these trips, there are all these people full of concern for you.”

The very first trip without her family happened in class XI. “Some of us friends decided to go from Kozhikode to Thiruvananthapuram, stopping at homes of friends along the way. That had been the first.” But only the first of many more to come for Raziya says, she will not stop travelling. She will continue on her quest. “You will have to break some rules to gain something in life,” the 20-year-old says.