Their dress sense conveys a lot

Kanimozhi is known to shop at select designer stores in Chennai and also has a personal designer in Khader Nawaz Khan Road with whom she gets her outfits made.

Kanimozhi, a cultural icon-turned-politician keeps it simple with Kota saris, chanderi salwars and raw silk dupattas. Her sense of style is understated yet appeals to the everyday woman in Tamil Nadu.

Daaksha Pradheyini, an IT professional who saw Kanimozhi campaign during the recently concluded Lok Sabha polls, says, “Kanimozhi’s dressing is simple but the textures and colours are unique. She wore a monotone sky blue sari in jute with silver jewellery to match. It was whilst addressing her party men. It conveyed so much dignity and there was self-assured body language. A lot of the body language comes from being comfortable in what you wear too.”

Kanimozhi is known to shop at select designer stores in Chennai and also has a personal designer in Khader Nawaz Khan Road with whom she gets her outfits made. As an MP, her look has predominantly shifted from crisp salwar suits to well draped saris in jute, organic cotton and raw silk. Sometimes she can be spotted sporting a colourful Sambalpur silk sari.

Well-known designer Tina Vincent says, “I design clothes for many politicians in Tamil Nadu. The brief is very simple, they want to be dignified and convey strength. I work on their look including the minutest detail of what a print may convey or a motif will reveal. Most politicians, and this includes men, prefer indigenous fabrics. They mostly prefer high-quality cotton, linen and raw silks.”

Sreemoyee Kundu, an author and keen observer of Indian politicians, says, “Comfort is essential. Look at Sonia Gandhi for example, she seems at ease while standing atop a campaign vehicle, running into the crowds and hugging people and managing long distances in sweltering heat. The clothes she wears are simple cottons and handloom saris.

She seems more of a weaves person than bold prints. Her taste in saris is impeccable. Often we can see her in khadi or Thelia Rumaal weaves from AP Nowadays, a similar sense of style can be spotted on Priyanka Gandhi.” 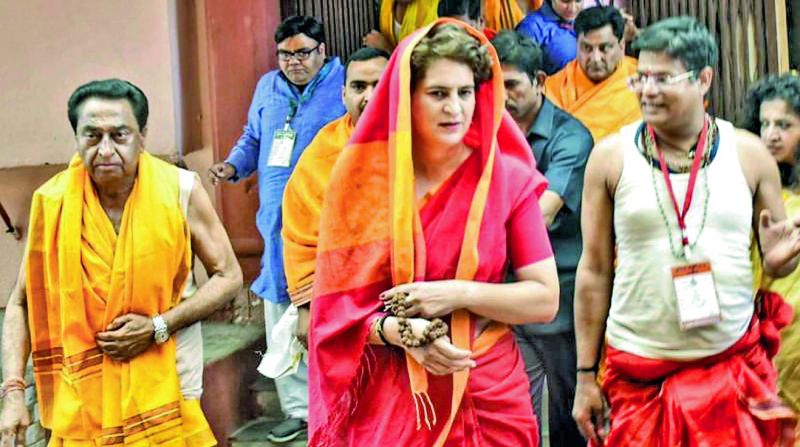 Priyanka Gandhi Vadra is also mostly seen in Odisha, Bengal or Andhra textures, often teamed with a contrast blouse or a simple white cotton blouse. Sonia and Priyanka both ditch the fussy, embroidered look and opt for a subdued yet striking sense of style. In 2009, at a massive public rally in Amethi, Priyanka is said to have worn her grandmother Indira Gandhi’s heritage Odisha sari with tribal weaves and a border.

Sushma Swaraj, one of India’s most popular faces around the globe as foreign minister is said to prefer pure cottons but of no particular style. However, she reportedly wears colours for each day of the week as her astro charts indicate.

The style statement of politicians like Smriti Irani, Kanimozhi, Nirmala Sitharaman, Sushma Swaraj and even Sonia Gandhi conveys to the people of each state that leaders at the national level are in touch with your flavours and textures. They choose their saris carefully to also endear themselves to a regional audience when in their state. 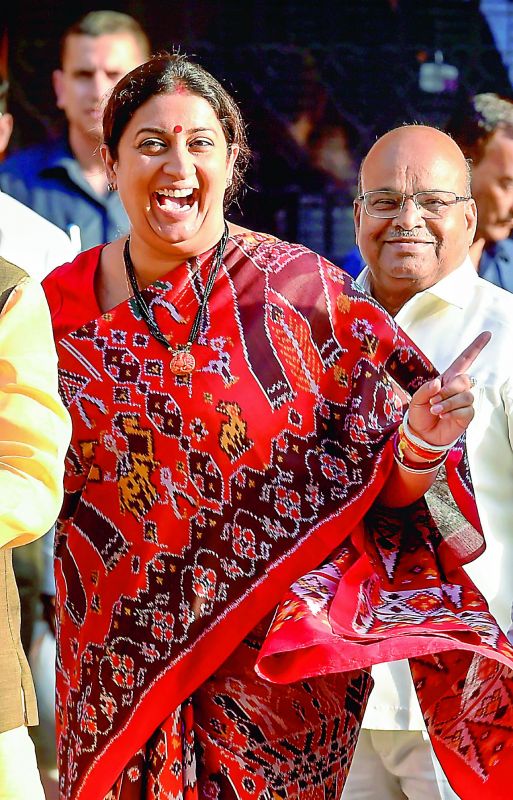 For example: Smriti Irani wore a Kanjeeveram in Tamil Nadu. She’s often seen wearing the famous patola saris from Gujarat. Sonia Gandhi, once on a trip to Kashmir, wore the local feran and the crowds loved it.

Former professor at National Institute of Fashion Technology, Fibin Raj who now runs his own fashion workshops in Kerala, says, “Be it a crisp sari or a handloom sari, the clothes worn by politicians are expensive. They are difficult to source because of high standards of quality and also pliability of the material to dyeing and any extra work that needs to be done. Whilst it’s necessary to create an image in the minds of the people they serve, they must definitely be comfortable. Hence, quality becomes very important and with it the prices of the saris.”

Speaking of Priyanka Gandhi, he says, “It’s not rare to discover the 47-year-old Priyanka dressed in colour-blocked cotton saris with contrast borders, whether accompanying mum Sonia in Rae Bareli, brother Rahul in Amethi or while campaigning in Ghaziabad. In Varanasi, she accessorised a stripy yarn handloom with rudraksh beads.”

At the other end of the spectrum is the actor Rekha who as the distinguished member of the Rajya Sabha turned up in exquisite Kanjeevaram saris. She is known for her over-embellished look teamed perfectly with her meticulously done make-up. Rekha is known to shop for her saris from all over India and has a special fondness for a store in Chennai that she shops at when she’s here to visit her sister Dr Kamala Selvaraj. It is said that Rekha’s taste in saris is so refined that she is particular about the kind of zari that is used and each sari costs anywhere between Rs 65,000 to Rs 1,50,000. 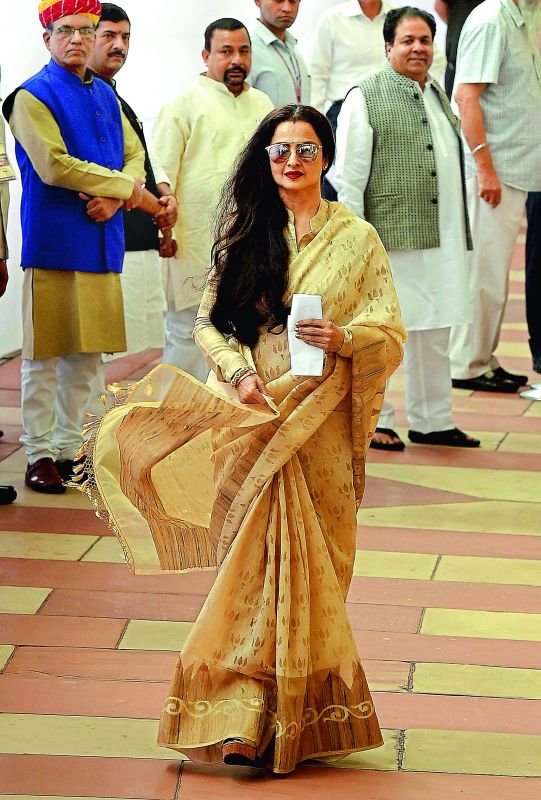 Tina Vincent says, “Rekha is a champion of her roots from Tamil Nadu and flaunts the Kanjeevaram at every event across the globe. It’s also nice to see her sashay into Parliament with so much style.”

And why not. There’s no rule that says politicians can’t dress up!

Image consultant Sapna Handa, says “People have gone past just judging people based on their appearance and looks. Hema Malini struck a chord with the people and won for the second time. The sanskari look is overrated and Indians, be it rural or urban, are now looking at content and not just the façade. If you look closer, Narendra Modi who is tallest leader has transformed into one of the most stylish politicians who wears top designerwear and still has a rising rural votebank.”